This article deals with the mythical figure, for other meanings see Antigone (disambiguation) .

Antigone [ an'ti: gɔne ], also Antigonae or Antigonä ( ancient Greek Ἀντιγόνη Antigónē ) is a figure from Greek mythology . She is a daughter of Oedipus . The classic version of their myth can be found in the eponymous tragedy of Sophocles , probably 442 BC. Was performed for the first time. According to this, Antigone is one of four children Oedipus fathered with Iokaste . Sophocles' tragedy differs from other, mostly older versions of the saga in this and in some places as well.

The Antigone myth belongs to the Theban cycle , the second great circle of ancient myths next to the Trojan cycle . Antigone is a daughter of Oedipus and therefore sister of Eteocles , Polynices and Ismene . According to older and Boeotian mythological traditions, her mother is Euryganeia , Oedipus' second wife. With the Attic poets of the classical period - as already in the tragedy Seven Against Thebes by Aeschylus - on the other hand Iokaste - called epicaste in Homer and Pausanias - is the birth mother of the children of Oedipus. She was previously the wife of Laius , Oedipus' father, and according to most ancient versions also the birth mother of Oedipus. According to another version quoted by Epimenides , however, Eurycleia was the birth mother of Oedipus, while Iocaste was Laios' second wife. After Oedipus has killed his own father - according to the most popular variants of the legend without recognizing him, in a scuffle - he married Iokaste. When Oedipus later finds out that he - saga variants from the 6th or 5th century BC According to an inevitable prophecy - killing his father and marrying his mother and finding dead Iokaste, who had hanged herself out of shame, he stabs his eyes out according to a classic version. In the Euripides tragedy The Phoenicians , however, Iokaste does not commit suicide until after the deaths of Polynices and Eteocles (see below). The self-blindness and subsequent expulsion of Oedipus is also not part of older mythical traditions.

After the tragedy of Sophocles, among other things, Antigone accompanies her blind father, who has been sent into exile, to Kolonos near Athens (see Oedipus on Colonos ). Antigone is then freed by Theseus when her uncle Creon tries to kidnap her. After the death of Oedipus, she returns to Thebes according to this version in order to prevent the duel between her brothers Eteocles and Polynices prophesied by him.

After Oedipus' death, his sons Polynices and Eteocles agree , especially according to versions of Athenian playwrights, to share power in Thebes by taking turns to rule. After his brother is not ready to hand over rule to Polynices, as agreed, the latter gathers an army in Argos and moves against the "seven-gate" Thebes. Corresponding sagas formed the basis for Aeschylus ' seven against Thebes . In the ensuing war against Thebes, Eteocles remains victorious at six gates, but on the seventh the brothers kill each other. The tragedy Antigone by Sophocles begins at this point. 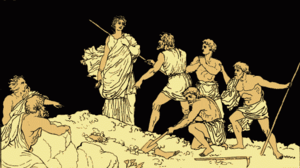 This article or section needs revision: see the IP notes on the talk page, where it would have been better to name conflicting ancient authors. The following two paragraphs, however, undoubtedly follow the versions of Attic (!) Dramatists (or Gustav Schwab) and are therefore one-sided. Alternative versions can already be found in the more recent literature given - but these must then also be incorporated!
Please help to improve it , and then remove this flag.

Creon, according to legend, once again the interim king of Thebes, issues a ban, according to which the dead Polynices may not be buried because he had betrayed the fatherland. The attempt to bury him is to be punished with death. But Antigone puts her own conscience above the law and believes that he has to obey the gods more than men. She initiates the rituals prescribed by the gods , from which her sister Ismene tries in vain to dissuade her . After Antigone enabled her brother to move into Hades through a symbolic burial (she throws earth on his corpse) , she is discovered by a guard. This leads Antigone to Creon and tells him what Antigone did. When Creon asked Antigone whether the guard spoke the truth, she replied in the affirmative. Antigone claims to have done the right thing before the gods. She is ready to atone for her deed before the law. At the same time, Ismene tries to protect her and does not want to send her to her death alone. Therefore, she is ready to claim to Creon that she knew about Antigone's plans. But Antigone refuses her offer.

Creon sentences Antigone to death by being buried alive, despite being the bride of his son Haimon . Some food is given to her, otherwise Thebes would be sullied from the gods. Haimon sides with Antigone by accusing his father of Creon of stubbornness . Both split up in an argument. However, when the seer Teiresias prophesies death within his own family, Creon gives in. However, it is already too late: Antigone, locked up in an earthly dungeon, has escaped starvation by suicide , whereupon Haimon also chooses to commit suicide. When his mother, Creon's wife Eurydice , hears about it, she also commits suicide. - Creon realizes that the responsibility lies with him and the guilt lies in his hubris .

From the archaic historians and poets who took up the name, fragments of the scholia have come down alongside Homer . Pausanias , who lived in the 2nd century AD, has incorporated a lot of information from archaic epics in his work, "Description of Greece", and provides further information. Also included in the list of possible archaic sources is the library of Apollodorus from the 1st or 2nd century AD, which could reproduce the archaic tradition.

Homer mentions in the Odyssey that Odysseus met Oedipus' mother on his way into the underworld . Homer calls them epicastes . The 9 verses tell how Epicaste unwittingly married her son and her husband's murderer, Oedipus, and hanged himself out of misery. The story is not told any further. Children or their names are also not listed.

Pherecydes of Athens reports in the early 5th century BC. BC that Oedipus was married to three women. The first wife, Iokaste, bore him Phrastor and Laonytos, both of whom died in the war against the Minyans . The second wife was Euryganeia, daughter of the Phlegyer king , Periphas. She was the mother of Antigone, Ismene, Eteocles and Polynices. After the death of Euryganeia Oedipus married Astymedusa, the daughter of Sthenelos. This is the earliest mention of Antigone, although Pherecydes assumes that they are known.

The much-cited Scholion on the Phoenicians of Euripides, based on a Peisander, is controversial in terms of its time and content. With the Greek epic of the 7th century BC BC, Peisandros of Kameiros , it cannot be connected. Felix Jacoby suspected that it dates back to the Hellenistic period and that it was a mixture of Oidipodeia and the Greek tragedies . Others came to the same conclusion and one recognizes in him today a well-documented mythographer of the Hellenistic period.

Pausanias refers to the Homer verses mentioned and questions the motherhood of the Iocastes. Among other proofs (which he does not list), he refers to the author of the Oidipodeia from the 8th to 6th centuries BC. BC who is said to have said that Euryganeia, the daughter of Hyperphas, was the mother of Antigone, Ismene, Eteocles and Polynices. Furthermore, he cites the painter Onasias as evidence, who painted a depiction of a sad Euryganeia in Plataiai about the quarrel between her sons.

At another point, Pausanias describes the place where Antigone buried her brother Polynices. Not far from the tomb of Menoikeus , the battle between Eteocles and Polynices took place. The scene of their fight is marked by a pillar on which there is a stone shield. The whole place is called the grinding of Antigone because her brother was too heavy for her, so she dragged him to the burning pyre of Eteocles and threw him on it.

According to the library of Apollodorus from the 1st or 2nd century AD, Antigone is the daughter of Oedipus and Iocaste. Tradition indicates that others claim that Euryganeia, the daughter of Hyperphas, was the mother of the four children. Iokaste hanged herself when she became aware of the iniquity and Oedipus left Thebes with Antigone. Later, Antigone secretly took away the dead Polynices and buried them. She was caught by Creon and laid alive in the grave. In this tradition it is not clear which parts are of archaic origin and which emerged from the processing of Greek tragedies.