This article deals with the mythical figure, for other meanings see Oedipus (disambiguation) .

Oedipus ( ancient Greek Οἰδίπους Oidípous ; modern Greek Οιδίποδας Idípodas ) is a figure in Greek mythology . He is a son of Laios , king of Thebes , whom he kills at a fork in the road or a crossroads. Later, as a reward for freeing Thebes from the Sphinx , he received Iokaste , the king's widow as his wife, who, according to most ancient sources, is also his birth mother. Only later does Oedipus find out that Laios is his father. As was once prophesied to him and Laios, Oedipus killed his father and married his mother. In Sophocles ' drama King Oedipus , Iocaste hangs himself when the truth comes to light, whereupon Oedipus stabs his eyes out and goes into exile with his shame. Other versions differ considerably with regard to the further fate of Oedipus, sometimes also with regard to that of Iokastes.

The tragic figure of Oedipus has found its way into literature, art and philosophy many times. The psychoanalytic concept of the Oedipus complex goes back to Sigmund Freud .

King Laios [spoken: La'i'os] of Thebes had once abused the hospitality of King Pelops by kidnapping his son Chrysippus . That is why he was cursed by Pelops and, according to some traditions, (also) by Hera .

Laius and his wife Jocasta - from Homer and some other sources Epicaste called - has long remained childless. Because of this, one day Laios went to the Oracle of Delphi and heard of the curse. The oracle said: "If you ever dare to father a son, he will kill his father and marry his mother." According to other sources, he received this prophecy through the seer Teiresias .

Iokaste actually had a son. After Epimenides , however, Eurycleia was the first wife of Laius and mother of Oedipus. Laios, in agreement with his wife Iokaste, had the newborn's feet pierced, tied up and then abandoned by a shepherd in the Kithairon Mountains. But the messenger took pity on the newborn and handed him over to a passing shepherd. Through this the child came to King Polybos of Sikyon and was adopted by him. His wife Periboia , or Merope according to another tradition , healed his wounds. She called him Oidipus ("swelling foot ") because of his swollen feet . According to another version, Polybos is considered the king of Corinth . However, this can only be reliably proven with Sophocles.

The first syllable of his name has the same meaning as edema , the medical term for a swelling. This etymology has occasionally been questioned and it has been suggested to translate “Oidipous” with “He who knows everything”.

Oedipus grew up in Sicyon or Corinth without knowing where he came from. When he was reaching puberty, a drunk man made hints at a party that he was not the birth son of his parents. Oedipus was worried, the answer from Polybos and Merope did not satisfy him, and so he finally asked the oracle himself. Specifically, he asked the oracle who he was. The oracle failed to answer and instead announced that he would kill his father and take his mother as his wife. Horrified, he then set off into the distance so that the prophecy to his supposed parents in Corinth would not come true.

On the way from Delphi to Daulis , he met a wagon at a narrow fork in the road in the Parnassus Mountains - according to other information in the Kithairon. Polyphontes, the driver of the other car, asked Oedipus to leave immediately. Since this was going too slowly for him, he killed one of the horses of Oedipus, whereupon Oedipus killed both Polyphontes and, unsuspecting, his passenger and thus his biological father Laios, which fulfilled the first part of the oracle's prediction. 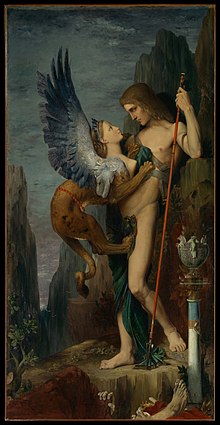 Gustave Moreau's painting Oedipus and the Sphinx in the Metropolitan Museum of Art , New York 1864

After Laios death, his brother-in-law Creon took control of Thebes. At that time the Sphinx was ambushing travelers near Thebes. She sat on a rock and posed a riddle to those who passed by and devoured everyone who could not solve it. Creon promised him the throne of Thebes and also his sister Iokaste as a wife, who could solve the riddle of the Sphinx . Oedipus solved the riddle, whereupon the Sphinx plunged into the sea, and thus freed Thebes from the Sphinx. As a reward he was made King of Thebes and received Iokaste, his own mother, as wife, with whom he fathered the twins Eteocles and Polynices and the daughters Antigone and Ismene . So the second part of the prophecies came true. However, mother and son knew neither about the killing of Laios by Oedipus nor about their biological relationship.

Other, older, traditions name a second wife of Oedipus Euryganeia as the mother of the children Eteocles, Polynices, Antigone and Ismene. Pausanias cites the work Oidipodeia and reports on a painting by Onasias that he had seen in Platää . This painting shows Euryganeia dismayed by the war between her sons Eteocles and Polynices. With Iokaste he is said to have been the father of Phrastor and Laonyto. Later he is said to have married Astymedusa, the daughter of Sthenelos.

According to a story that the Boeotian poet Korinna reproduced, Oedipus also killed the Teumessian fox .

When an epidemic broke out in Thebes, the oracle of Delphi announced that the murderer of Laios had to be found so that the epidemic could disappear. The blind seer Teiresias reluctantly, urged by Oedipus, revealed him as the murderer of Laios. Oedipus did not believe him, but after his own investigation of the old incidents he himself came to the conclusion that he had killed Laios, that Laios is his father and Iocaste, his wife, is also his mother. Then Iokaste hanged himself on her veil and Oedipus poked his eyes out of Iokaste's robe with two golden needles.

There are numerous versions of the other events:

Persistence of myth in art

As the epitome of a Greek tragedy , the subject was artistically treated several times in ancient times. Sophocles shaped Oedipus' fate in several pieces. The Oedipus dramas by Aeschylus and Euripides have not survived. Seneca also processed this material.

In the fine arts and philosophy of cultural history in Europe, the encounter between Oedipus and the Sphinx in the 19th century is interpreted as a symbolic key scene for the "riddle of woman" and in the conflicting gender relationship , especially in German, Belgian and French classicism and symbolism and salon painting ( Jean- Auguste-Dominique Ingres , Gustave Moreau , Fernand Khnopff , Franz von Stuck , Jules Michelet , Hermann Bahr ).

Inclusion of myth in psychoanalysis and philosophy

According to the Oedipus myth, Sigmund Freud named a psychoanalytic phenomenon " Oedipus complex " or "Oedipus conflict". In the context of his theories about infantile sexuality , Freud interpreted patricide and the desire of one's own mother as a basic pattern of unconscious wishes. According to Freud, the child's development phase, in which the rivalry between son and father is a central theme, is called the “oedipal phase”.

Erich Fromm rejects this interpretation of Freud and, citing Johann Jakob Bachofen, explains that the myth describes the struggle between patriarchal and matriarchal principles. In all three parts, the father conflict is to be interpreted as a conflict of authority at the family level . This is also reflected on the social-state level, in the person of Creon, who advocates the patriarchal social system, and his confrontation with Antigone and Haimon, who both represent the old matriarchal order. Creon takes the view that the sons should be of service to their fathers, state law has top priority and the ruler owns the state and his subjects. According to Bachofen, this must have been different at the time of matriculation. Due to the impossibility of determining fatherhood in a promiscuous society, all people must previously have been regarded as brothers and sisters and only women could have assigned their children. Thus, according to Bachofen, consanguinity and the maternal and caring principle were more important than state ties. The maternal principle is not only found in family and society, but also in religion , which is why Bachofen points out that the oldest deities were women (e.g. Demeter ). In this context, Oedipus should be understood as one of the last representatives of the matriarchal order.

The philosopher Michel Foucault described the Oedipus myth in The Truth and the Legal Forms as the description of an ancient "criminal case" that tries to be solved in two different ways: One by the archaic means of "trial", i.e. the oracle and that God's judgment, and then later through the "enquête", the investigation of the course of events and questioning of witnesses, which Oedipus himself conducts. He is thus a victim of his knowledge: first he receives power through the encounter with the Sphinx and becomes king of Thebes, only to then lose it again because of his acquired knowledge, namely who he is and that he himself killed his father.

The post-structuralist philosopher Gilles Deleuze and the psychoanalyst Félix Guattari represent in the first volume of their unfinished trilogy Capitalism and Schizophrenia 1972, with the title Anti-Oedipus , in a fundamental critique of Freudian psychoanalysis, the view that repression , e.g. B. the Oedipus complex , and the resulting neuroses are the essential mechanism of psychic individuation , but separation and differentiation of multiple identities . As co-founders and representatives of the anti- psychiatry movement , they therefore plead for a reorientation of psychiatry in favor of “ schizoanalysis ”.

In his book Oedipus and Akhenaten, Immanuel Velikovsky put forward the theory that this must be a wandering legend from the "hundred-gated" Egyptian Thebes .