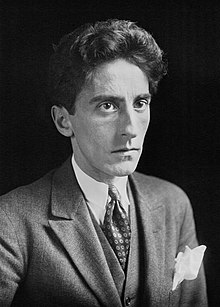 Jean Cocteau was born on July 5, 1889 near Paris. He had an older sister, Marthe (1877–1958), and an older brother, Paul (1881–1961). He traveled extensively with his mother, and his talent for poetry became apparent early on. Jean attended the Condorcet Lyceum . His father, a successful lawyer , died of suicide when Jean was ten years old. At the age of 17 he published his first poems. At 19, in 1909, his first volumes of poetry, La Lampe d'Aladin and Le prince frivole , were published, and they made him famous. His literary friendships that he made with Edmond Rostand , Marcel Proust , Catulle Mendès and André Gide gave him further valuable suggestions . On the side he tried his hand at the performance of ballet and got to know Igor Stravinsky . He wrote his first novel Potomac in 1913.

After the beginning of the First World War , Cocteau volunteered for service in the army. He was found unfit for the front and organized transports of the wounded in private cars. He was arrested for illegal activity and later rehabilitated. When he returned, he wrote the libretto for the cubist ballet Parade in 1917 . The set and costumes were created by Pablo Picasso , the music by Erik Satie , and the choreography by Léonide Massine . The dancers were part of the Ballets Russes troupe . Jean Cocteau wrote extraordinary plays such as Orphée (1926; model for his 1950 film of the same name ) and La machine infernale (1932). He wrote other volumes of poetry and became known as a novelist.

Cocteau was known as a universal artist and developed more and more to the maître de plaisir of Paris. As a writer he had his talent in many areas, be it in poetry , aphorism , a short story , a novella , a novel , drama or a screenplay . He also worked successfully in painting and drawing. Under the influence of Pablo Picasso's painting and the Surrealists , he adopted various styles of the past decades. Cocteau was always in contact with artists and filmmakers such as Charlie Chaplin . 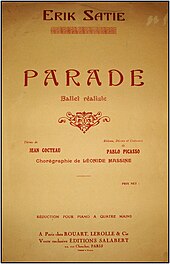 In the early 1930s Cocteau made his first feature film, Le sang d'un poète (Eng. The blood of a poet ) , with which he broke new ground. These initially sparked protests from the audience, but this was followed by a few films that have all made film history . In the course of time he worked as a director, screenwriter and actor in several films. For the film Der Zauberlehrling (1933), in which the very successful German dancer Jean Weidt, who fled into French exile, played the main role, Cocteau designed the figure of the sorcerer's apprentice. The director was Max Reichmann , who also fled into exile . Cocteau was friends with Jean Marais , for whom he liked to tailor roles. Therefore Cocteau is also considered to be the discoverer of Jean Marais. From the 1920s until the end of his life, Cocteau was also close friends with the German sculptor Arno Breker, who was a leader in National Socialism . Even during the German occupation of France 1940–1944, Cocteau publicly acknowledged this personal friendship. In May 1942 Cocteau took part in the opening of the Arno Brekers retrospective in the Musée de l'Orangerie and published a poem in homage to Breker on the occasion, published under the title “Salut à Breker” in the Paris cultural magazine Comœdia, thereby provoking the French Friends who were critical of the collaboration . On the other hand, Cocteau's closeness to Breker and the German embassy under Otto Abetz is opposed to a distanced attitude towards the Vichy government, which censored the plays and writings of Cocteau and banned them in the unoccupied zone. Cocteau and Marais sat Breker as a model for the creation of portrait busts. In 1947 Cocteau bought a large country house in Milly-la-Forêt , which is now open to the public as a museum.

He often designed his costumes and stage sets himself. His monumental ceiling and wall paintings caused a sensation, for example in the wedding hall of the town hall of Menton (1958) and in the Notre Dame de France church in London (1956).

In 1954 he became a member of the Academy of Arts in France and Belgium . In 1955 he was accepted into the Académie Française as the successor to Jérôme Tharaud and thus finally recognized as a cultural authority throughout the country. In 1957 he was elected as an honorary foreign member of the American Academy of Arts and Letters .

Because of an opium poisoning had Cocteau, who for many years was a drug addict, to be treated medically. Cocteau was bisexual and had relationships with men (including Jean Marais) and several relationships with women, including Natalia Pawlowna Paley (1905-1981), a Romanov princess. He published several works in which he sharply criticized homophobia .

He died on October 11, 1963, six months after his heart attack in April 1963, and one day after the death of his girlfriend Édith Piaf , for whom he had written the highly successful one-act play Le Bel Indifférent in 1940 and for which he allegedly more than only felt friendly. It was widely rumored that his heart failed when he received the news of Piaf's death, in some cases the two were even referred to in the headlines as the bridal couple of death . Cocteau died hours later in his country house. A few days before his death, wrote Louis Amade the text for a song , titled Quand il est mort, le poète ( "When the poet is dead"), honoring the Amade expressly Cocteau wanted and the composer and singer Gilbert Bécaud on record published . Jean Cocteau was buried in the Chapelle Saint-Blaise in Milly-la-Forêt. The bronze portrait created by Breker was placed in the chapel for the funeral service. A copy of the Cocteau portrait is in the Museum Europäische Kunst at Nörvenich Castle . In 1964, his works were shown posthumously at documenta III in Kassel .

He arranged for his diary to be published only after his death . That is why it appeared on his 100th birthday in 1989 under the title Le passé defini .

Despite his accomplishments in almost every literary and artistic field, Cocteau insisted on being a poet first and foremost. He called all of his works poetry. One of his famous quotes was the saying: "A good upbringing consists in hiding how much you value yourself and how little you value others."

As a leading surrealist , he had a great influence on the works of others, including a group of composer friends in Montparnasse who called themselves Les Six . Although the word "Surrealism" by Guillaume Apollinaire coined, called André Breton , the self-proclaimed leader of the Surrealists, Cocteau as "notorious false poet , a Versmacher that everything he touched, canceled instead enhances " (Breton, 1953).

A museum dedicated to Cocteau with numerous works as a gift from the collector Séverin Wunderman has been located in Menton in the south of France since 2011 , where Cocteau has been regularly since 1955. The design comes from the French architect Rudy Ricciotti . It complements the Musée Jean Cocteau in the old bastion of Menton , which has been in existence since 1966 . Both museums together exhibit around 2000 works, around half of which came from Wunderman's donation.

Cocteau's country house in Milly-la-Forêt , acquired in 1947, has been open to the public as the Maison Jean Cocteau museum since 2010 .