View from the Eiffel Tower to Montparnasse

Quartier Montparnasse in the 14th arrondissement

The Quartier de Montparnasse [ mɔ̃paʀˈnas ] is a district of Paris , named after an artificial hill on today's Place Pablo-Picasso, which was demolished in the 1760s. The southern part of Montparnasse, which formerly belonged to the municipality of Montrouge , was incorporated together with other outlying districts on January 1, 1860 and has since formed the 53rd of 80 Parisian quarters . Today the name is also used beyond the district boundaries and is synonymous with the artistic scene of the École de Paris , which settled in the streets around Place Pablo-Picasso in the 1910s and 1920s.

The name Montparnasse is derived from the mountain ( French mont ) Parnassus from Greek mythology - home of the muses and the epitome of poetry . The name came about in the 17th century by the students of the nearby Latin Quarter who visited the hill outside the city in their spare time to recite poetry.

The Montparnasse hill was formed in the late Middle Ages from heaped rubble from the city's catacombs and the nearby limestone quarries. A first road around 1700 ran straight over the hilltop and connected the two districts of St. Germain and St. Jacques. In the first half of the 18th century it was expanded to the "Nouveau Cours de Mont Parnasse" and the hill was partially removed. From around 1790 this new street was called Boulevard du Montparnasse. Between 1785 and 1790, a new (customs) city boundary, the Barrière du Mont Parnasse , was built south of the boulevard . In this way, today's Boulevard Edgar Quinet was created with a customs house at the height of today's Rue Montparnasse. These city limits remained in place until 1860 and thus created the nucleus of the quarter around today's Place Pablo-Picasso. While some “Salles de spectacles” were already settling in front of the gates of the city in today's Rue de la Gaité, the area around today's Square Delambre remained extremely rural. Only the gardens of a few larger parcels of the Rue Notre Dame des Champs, including the Collège Stanislas , adjoined the Boulevard du Montparnasse . A renovation of the Boulevard du Montparnasse in the 1840s brought gas lamps and benches and made the boulevard also attractive for strollers. At the same time, the private Compagnie du Chemin de Fer de Paris à Versailles par la rive gauche de la Seine built a first small train station in front of the Barrière de Maine, around the site of today's Gare Montparnasse. It soon turned out to be too small, so that shortly afterwards a new train station, Gare de l'Ouest, was built on behalf of the state and completed in 1852, this time within the city walls, at the height of today's Montparnasse-Bienvenüe metro station.

As early as 1784, the Almanach du voyageur à Paris on the boulevard mentioned music and play cafés. From the 1830s, artists moved to the newly laid out side streets of the boulevard, where they soon converted the two to three-story houses with the garden houses on the back into studios. In 1881 Filippo Colarossi opened the first private art academy in Montparnasse based on the model of Rodolphe Julian , which attracted a large number of young artists to the Rive Gauche . Among them was Alfons Mucha , who took a room in Montparnasse in 1889. In 1891 Paul Gauguin spent a few months in Montparnasse and taught at Colarossi's Academy.

The world exhibition of 1889 and the legendary reputation of Montmartre again attracted domestic and foreign artists and intellectuals to Paris towards the end of the 19th century, who made this still young, more centrally located district the center of their lives. The climax of this artistic movement in the 1920s, the so-called années folles ('crazy years'), finally helped Montparnasse to its current fame. 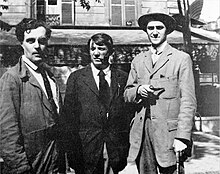 Modigliani, Picasso and André Salmon in front of the Café de la Rotonde, Paris, in 1916

The writers, sculptors, painters, poets and composers from all over the world found a creative atmosphere and affordable living space at Montparnasse, for example in artist colonies such as La Ruche . The members of this international community, later known as the École de Paris, welcomed the most diverse, bizarre and provocative forms of creativity into their circle. Pablo Picasso and Guillaume Apollinaire were among the earliest comers and residents of Montparnasse .

The English painter Nina Hamnett reported in her autobiography Laughing Torso how she came to Paris for a few days for the first time in 1912 and met Jacob Epstein and Brancusi there . “Montparnasse,” she wrote, “was cheap and everyone worked all day and came to the Rotonde in the evening.” On her first evening in Paris, she continues, her later boyfriend Amedeo Modigliani came to her restaurant table and faced her with the The words “Je suis Modigliani, Juif, Jew”, whereupon he offered her his drawings for five francs. The Japanese artist Tsuguharu Foujita had a similar experience in 1913: within a few days and weeks he met Chaim Soutine , Amedeo Modigliani, Jules Pascin and Fernand Léger , as well as Juan Gris , Pablo Picasso and Henri Matisse , who soon became his friends. The poet Max Jacob said he came to Montparnasse to "sin terribly". Marc Chagall described his reasons as follows: “I wanted to see with my own eyes what I had only heard from so far away. This revolution of the eye, this rotation of colors that spontaneously and unexpectedly mix with another and merge into a stream of imagined lines. You couldn't see that in my city. The sun of the arts only shone on Paris. "

Attracted by the creativity of the penniless artist scene, wealthy celebrities from the USA such as Peggy Guggenheim , Edith Wharton and Harry Crosby came to let themselves be infected by the creative atmosphere. Crosby and his wife Caresse founded Black Sun Press in Paris in 1927 and brought out works by DH Lawrence , Archibald MacLeish , James Joyce , Kay Boyle , Hart Crane , Ernest Hemingway , William Faulkner , Dorothy Parker , among others .

The cafes and bars of Montparnasse were the places where new ideas were born and developed. The center of the scene and nightlife was at Carrefour Vavin, today's Place Pablo-Picasso. In cafes like Le Dôme , La Closerie des Lilas , La Rotonde , Le Select and La Coupole - they all still exist - artists could occupy a table for the whole night for little money. If they fell asleep, the waiters weren't allowed to wake them up. Café owners like Victor Libion ​​from Café de la Rotonde have often accepted the drawings and pictures as payment or as a deposit. Many cafes had an improvised art collection on the walls.

One of the many places where the artists gathered was the dingo bar near Le Dôme at number 10, rue Delambre. It was the bar of choice where Americans met and where the Canadian writer Morley Callaghan went with his friend Ernest Hemingway , both writers at the time whose works were not published. Man Ray set up his studio in the Hôtel des Écoles (15 rue Delambre), and later in the Hôtel Istria at 29, Rue Campagne-Première. This is where he began his career as a photographer, and this is where James Joyce , Gertrude Stein and Jean Cocteau posed for him.

There were many musical theaters and nightclubs on Rue de la Gaité, especially the famous Bobino . Artists such as Damia , Kiki , Mayol and Georgius performed here . They mostly played to a sold out house. In the same area, Les Six were founded, playing music based on the ideas of Erik Satie and Jean Cocteau . 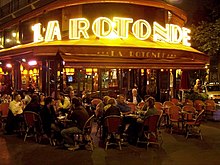 La Rotonde, 2007. More frequented by tourists than artists these days.

Not only artists came to the quarter, but also people who had to go into exile for political reasons settled here. These included Lenin , Trotsky , Porfirio Diaz and Symon Petlyura .

During World War II and the occupation of Paris, artists had to leave the city, some of whom had a Jewish background or were refugees - often both. Many of them were killed by the Nazis . The works of the less famous are often lost or scattered around the world, and it is difficult to document them.

Montparnasse was never able to regain its original size. Wealthy personalities like Peggy Guggenheim , who married the artist Max Ernst , lived in the elegant neighborhoods of Paris, but came to the studios of Montparnasse to buy works of art, which today e.g. B. can be found in the Solomon R. Guggenheim Museum .

The largest cluster of theaters in the district can be found around Rue de la Gaité and Boulevard Edgar. The Théâtre de Poche , the smallest theater in Paris, is located directly on the boulevard .

At the foot of the Montparnasse tower, the Musée Bourdelle shows works by the sculptor Antoine Bourdelle , who lived here and gave the street its name: Rue Antoine-Bourdelle.

The Musée du Montparnasse on Avenue du Maine, a non-profit and private art museum opened in 1998, relies on financial support from the district mayor's office. It displays a collection of works of art made available by artists, art lovers and friends of the neighborhood. The temporary exhibition Montparnasse déporté in the summer of 2005, under the patronage of President Chirac, showed for the first time works of fine art by Jewish artists from the district who suffered from Nazi persecution.

Strictly speaking, the museum of the Louis Pasteur Institute already belongs to the Vaugirard district.

Monuments worth seeing on Montparnasse include the Paris observatory (17th century), the former customs houses of Ledoux (17th century) and the tunnels of the former underground quarries, which were turned into catacombs from 1785 , both on Place Denfert-Rochereau, and more the Fondation Cartier art foundation by the architect Jean Nouvel on Boulevard Raspail and the Tour Montparnasse high-rise building with its 209 m high viewing platform.

The largest green area on Montparnasse is the Montparnasse Cemetery , where Charles Baudelaire , Jean-Paul Sartre , Simone de Beauvoir , Alfred Dreyfus and Samuel Beckett rest, among others .

Another green space is the Jardin Atlantique , a public park that has been created on the roof of Montparnasse train station.

Since the Gare Montparnasse connected Paris with Brittany, many Breton residents settled in this area in the 19th century, which is why there are many Breton restaurants where crepes and galettes are prepared.

The weekly three-hour inline skate tour through Paris starts on Fridays at 10 p.m. in the square in front of Gare Montparnasse train station .

Only a few artists who lived and worked on Montparnasse were born there. They came from many countries around the world and gave Montparnasse the cosmopolitan flair that it has retained to this day. Among the best known are, in chronological order of their dates of birth:

Montparnasse in the arts