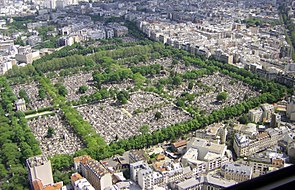 Aerial view of the Montparnasse cemetery

At the site of today's cemetery were three old courtyards and a mill (14th / 15th century), to which the students of the Jesuit college Louis-le-Grand used to direct their steps in their free time, which is why the mill was based on one of the Jesuit theologians Molina sparked polemic was initially called mockingly "Moulin Moliniste". When the Community of the Brothers of Mercy of Saint John of God (Frères de la Charité) took possession of the site in 1654 to make it their burial place, they kept the mill, henceforth called Moulin de la Charité (14./15. Century), which can still be seen in the cemetery today, albeit without its wings. From 1784 the dead of the Hôpital de la Charité, founded by the brothers near the Bourg Saint-Germain , were also buried here. At the beginning of the 19th century , the Paris prefect Nicolas Frochot bought the land to create the new cemetery. The first funeral took place in 1824. Since 1890 the cemetery has been separated by a road into a large part, Grand Cimetière (GC) and a small part, Petit Cimetière (PC).

Cenotaph of the poet Charles Baudelaire († 1867) 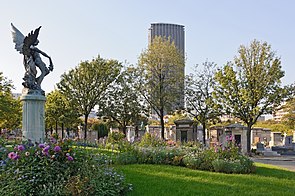 Interior view of the Montparnasse cemetery