The title of this article is ambiguous. For the underground station of the same name on the Paris Métro, see Père Lachaise (Métro Paris) . 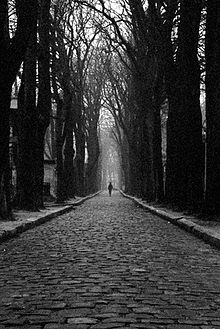 Père Lachaise in the fog 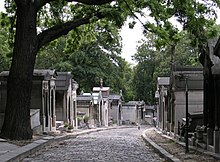 One of the alleys in Père Lachaise

The Cimetière du Père-Lachaise is the largest cemetery in Paris and also the first burial site in the world to be laid out as a park cemetery . It is named after Father François d'Aix de Lachaise , on whose gardens the cemetery was built. With an area of ​​44 hectares, it is the largest cemetery in Paris. So far, around one million deceased have been buried in 69,000 graves. With around 3.5 million visitors a year, Père Lachaise is one of the most visited places in Paris.

At the beginning of the 19th century, several new cemeteries had to replace the old ones in Paris. In order to end the monopoly of the church on funerals, an edict was issued in 1803 according to which graves could no longer be laid out as churchyards within the city limits, but should be placed under the supervision of the political community and set up outside the city. According to this principle, the main cemetery in Mainz in the Département du Mont-Tonnerre was laid out in 1803 . For Paris, on February 28, 1803 , the Seine Prefect Nicolas Frochot was able to purchase extensive gardens for the republic for 180,000 francs, which lay in the east of the capital, outside the city limits at that time. It has been completely redesigned and enlarged. The first burial on the Père Lachaise was that of a five-year-old girl, Adélaïde Paillard de Villeneuve, daughter of a porte-sonnette (a kind of parish servant ) of the Faubourg St. Antoine. It took place on May 21, 1804.

Despite its secular concept, the cemetery became known under the name of the Jesuit father François d'Aix de Lachaise (1624–1709), the confessor of Louis XIV , who a hundred years earlier held representative celebrations for the nobility on the Mont-Louis estate of the Jesuit order there had given. The long poplar avenue in the east remains from this time.

The concept of the Père Lachaise was entrusted in 1808 to the classicist architect Alexandre-Théodore Brongniart , who at that time was Inspecteur général en chef de la Deuxième section des Travaux publics du Département de la Seine et de la Ville de Paris , General Inspector of the 2nd Section for Public works in the Seine department and the city of Paris. Brongniart designed the large axes and the grave monuments, but only that was realized for the Greffulhe family in neo-Gothic style.

The new Passy cemetery was opened in central Paris in 1820 . Outside the city limits at that time, the Montparnasse cemetery was added in the south in 1824 and the Montmartre cemetery in the north in 1825 .

A permanent grave, a concession à perpétuité , cost 13,430 euros on Père Lachaise in 2012; there are also concessions for 50, 30 or 10 years. The design of the grave monuments is not regulated.

To the south of the cemetery is the Mur des Fédérés , a wall in front of which the presumably last 147 active members ( Communards ) of the popular uprising of the Paris Commune on May 28, 1871 were shot.

On the 100th anniversary of the Compiègne armistice on November 11, 1918 , the city of Paris had a plaque 280 meters long and 1.30 meters high placed on the outer wall of the cemetery on the boulevard de Ménilmontant for 94,415 fallen citizens of Paris and 8,000 missing people . 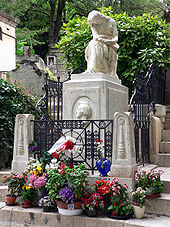 Frédéric Chopin's grave with the Muse Euterpe by Auguste Clésinger 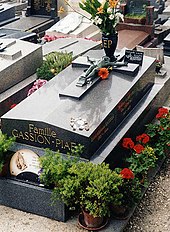 The grave of Édith Piaf 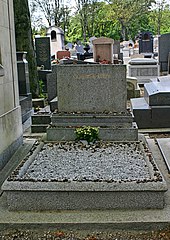