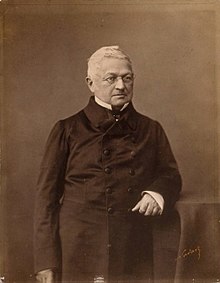 Adolphe Thiers in the 1830s

Thiers came from a family of civil servants: his father, Pierre-Louis-Marie Thiers, was a civil servant at the city archives in Marseille and later an entrepreneur; he was the eldest son of the former mayor and lawyer Louis-Charles Thiers. From 1806 Adolphe attended the Lyceum in his hometown, in 1815 he began to study law in Aix-en-Provence . In 1820 he was admitted to the bar, but felt more drawn to literature than to the legal profession, and in his spare time he also engaged in historical studies.

Thiers lived in Paris from 1821 and joined liberal circles there. Talleyrand became his sponsor. Thiers quickly rose to become the most important journalist in the Constitutionnel , the most important journal of the liberal movement. He later co-founded the more radical liberal newspaper Le National , which called for a constitutional monarchy and thus became the mouthpiece of the July Revolution of 1830. With the publication of Thiers' History of the French Revolution ( Histoire de la Révolution française ) (1823 to 1827) generally began a new, more positive view of the French Revolution; Thiers was above all an admirer of Napoleon .

In 1830 Thiers was the decisive advocate for the takeover of rule by the "citizen king" Louis Philippe . In the election that followed the revolution, Thiers was elected a member of the State Council . From 1832 to 1836, Thiers held several ministerial posts one after the other. From February 22 to September 5, 1836 and from March 1 to October 28, 1840 he was Prime Minister. He tried to cover up the domestic political crisis with successes in foreign policy. In the Orient Crisis , France under Thiers supported the Egyptian efforts to separate, but had to give in because of the determined attitude of the allied great powers Great Britain , Russia , Prussia and Austria . The Rhine crisis , which was triggered by French demands for the Rhine as the French eastern border, was intended to divert attention from this failure . Thiers' central political demands were the expansion of French influence to the Rhine and the Mediterranean. Not least because of this he came into conflict with the king and upper-class circles, whereupon he had to resign in October 1840 - after the failures in the Orient crisis and the Rhine crisis - and moved to the opposition camp. However, Thiers turned even more against the radical republican left than against Louis Philippe and Prime Minister François Guizot .

After the fall of Louis Philippe in 1848, Thiers pursued a liberal-conservative policy and fought against the political left. In his ideas of a “conservative republic” he turned against the universal suffrage introduced in 1848 and advocated a great influence of the Catholic Church in education.

Thiers thought Napoleon Bonaparte was a great man, but refused to have his nephew Napoleon III. to assist in his coup. For this he was arrested in 1851 and driven into exile. From his return to parliament in 1863, Thiers advanced to become the leading figure of the liberal opposition to Emperor Napoleon III. Before the outbreak of the Franco-Prussian War in 1870 he was one of the most determined opponents of the war. The Government of National Defense , he stayed away, but undertook on behalf of their foreign minister Jules Favre in the autumn of 1870 an ultimately unsuccessful six-week trip to several European capitals (u. A. London and Saint Petersburg ) with the aim of support for the French side to organize. Because of his attitude during the siege of Paris by the German troops, Thiers was accused, especially by left and left-wing extremists , of betraying the French cause. On February 17, 1871, he was elected "Chief Executive" by the National Assembly elected on February 8, and - together with Favre - was entrusted with leading the peace negotiations with Otto von Bismarck . In order to reduce the danger of a coup caused by those parts of the Paris National Guard and their leadership personnel who did not respect the election result , Thiers ordered the army to take possession of the around 400 cannons that had previously been stolen , but this failed and immediately triggered the uprising of the Paris Commune . At the end of May 1871 this uprising was put down by the constitutional powers of France under his leadership. To what extent the violence used in the process far exceeded that with which the commune acted against internal resistance, or whether, in view of the fact that the Versailles troops in large parts of the city as liberators and as saviors from "the reign of terror of bandits" and their general Arson welcomed in the face of defeat, the extent of which was understandable, is a matter of personal and political perspective.

Karl Marx criticized Thiers in an extreme way as an unprincipled and unscrupulous opportunist who was only concerned with his own advantage. In his address to the First International on the “French Civil War” he wrote: “Thiers was only consistent in his greed for wealth and in his hatred of the people who produce it. He entered his first ministry under Louis Philippe as poor as Hob [Job]; he left it a millionaire. ”On the other hand, the election result of February 8th proves that Thiers was by far the most popular statesman in France at the time: he was elected in 26 departments (including Paris, where he accepted the mandate), which is a unique one Is an exception.

On August 31, 1871, Thiers became the first president of the Third Republic and held his office until 1873. Since the royalists had a majority in the National Assembly and Thiers - although previously proponent of a constitutional monarchy - spoke out in favor of maintaining the republic, he had to on Resign 23 May 1873. In 1875 Thiers was elected to the American Academy of Arts and Sciences . When the government of his successor Patrice de Mac-Mahon broke up in 1877 and the republican party finally prevailed against the royalist faction, Thiers was again considered the most promising candidate for the presidency. However, he died during the election campaign at the age of 80 on September 3, 1877 in Saint-Germain-en-Laye and was buried in a funerary chapel in the Père-Lachaise cemetery in Paris.

President of the Third Republic