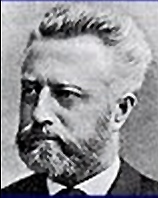 After completing his school education, Wilhelm Oncken studied classical philology, history and philosophy in Heidelberg , Göttingen and Berlin . During his studies in 1856 he became a member of the Frankonia Heidelberg fraternity . In 1862 he received his doctorate under Ludwig Häusser and was initially a private lecturer, then in 1866 an associate professor of history with ancient Greece in Heidelberg.

In 1870 he moved to Giessen to teach history there as a full professor. He viewed history as a means of national political education. First he worked on Greek history and later he turned to the history of Prussia and the German Unification. In the 1870s Wilhelm Oncken was a member of the National Liberals in the Hessian state parliament and in the Reichstag. In 1873 he turned down a call to the University of Königsberg . In 1877 and 1878 he was the rector of the University of Giessen.

From 1876 to 1891 Wilhelm Oncken published the work General History in individual representations in 44 volumes. Furthermore, he gave countless popular science lectures on the history of Germany held nationally across the country. Commissioned by Wilhelm I , Wilhelm Oncken wrote a biography about him for posterity. The work "The Age of Emperor Wilhelm" was not finished until two years after Wilhelm I's death. - He was a member of the Gießen Freemason Lodge Ludewig zur Treue and temporarily its master from the chair .

Wilhelm Oncken retired around 1900. He died on August 11, 1905 in Giessen at the age of 67. Wilhelm Oncken was the brother of the economist August Oncken .

Wilhelm Oncken found a response from the general public due to his countless popular science lectures, but received little attention in his field. His works were less characterized by new knowledge or scientific originality than by voluminous histories. His contribution was more to participate in the formation of national identity after the establishment of the Empire in 1870.

Member of the state parliament for the constituency of Giessen-Stadt