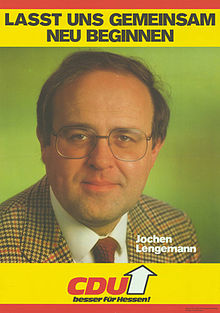 Jochen Lengemann on an election poster for the 1978 state election

After graduating from the Goetheschule in 1958 , a secondary school, Lengemann studied law in Marburg , Bonn and Cologne . He passed the first state examination in law in 1962, continued his studies in Geneva and then completed his legal clerkship in the Kassel District Court. In 1967 he finished his training with the second state examination in law. Lengemann acted as judge at the Frankfurt am Main regional court in 1967/68 , at the Kassel district court in 1968/1969 and at the Kassel regional court in 1969 .

Since the 1990s, many people Lengemann historical publications has to Hesse and Thuringia state history presented. Since 1992 he has been a member of the Historical Commission for Hesse .

Lengemann is married and has two sons, the older of whom is the photographer Martin UK Lengemann .

Lengemann served from November 8, 1990 to February 28, 1992 as the Thuringian Minister of State for special tasks in the state government led by Prime Minister Josef Duchač .

On February 1, 2010 he was made an honorary citizen of the city of Kassel by the Kassel city council .

Jochen Lengemann is the author of a number of books on historical and, in particular, parliamentary history topics. A selection:

President of the Hessian State Parliament