Certificate of honorary citizenship of the city of Uetersen from 1879 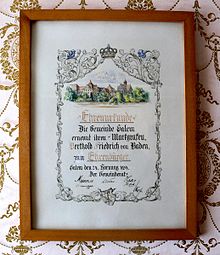 Certificate from Gau-Odernheim conferring honorary citizenship on Adolf Hitler on May 25, 1932, signature of Heinrich Ritter

Honorary citizenship is usually granted for life. Honorary citizenship is sometimes associated with special privileges , for example the granting of preferential treatment (free travel, free theater tickets, etc.) in city-owned institutions. It has also become quite common to show prominent people in this way who, as the son or daughter of this place, have achieved particular national fame. The honorary citizenship certificate is usually presented personally, so that the acceptance also represents a tribute to the city.

Honorary citizenship originally goes back to the French Revolution and its title “citoyen d'honneur”. The first German cities to award a similar honorary title were Saarbrücken and Hanover in 1790 and Frankfurt am Main and Bremen in 1795 .

In Germany, honorary citizenship was designed as an honorary right and was originally only granted to non-citizens . For example, the 1st honorary citizen of Berlin Konrad Gottlieb Ribbeck (* 1759, † 1826) was awarded this award on July 6, 1813, although he was not a landowner in Berlin and, according to Stein's city code of 1808, was not entitled to acquire citizenship .

The citizenship to the award was granted by the city authorities. As a rule, there were no legal effects associated with this honorary citizenship .

Variants of the award

With regard to the media effect of lower weighted awards, honors with medals, rings of honor or badges of honor as well as the title of city ​​elder are awarded for many years of reliable engagement in city parliaments or other important honorary offices.

In 1995 the city ​​of Gotha created the title of "Honored Citizen of the City" for Josef Ritter von Gadolla , the last " combat commandant " of Gotha executed in the spring of 1945 for attempting to surrender the city . In addition, so far (as of 2015) a further 31 personalities who had made a contribution to the development and the good reputation of the city, but who had already passed away, were named "Honored Citizens".

In 2003, the city ​​of Delmenhorst invented the symbolic title "Honorary Ambassador" for the pop singer Sarah Connor , as honorary citizenship was out of the question due to a lack of long-term voluntary commitment.

The deceased can be honored at the local level through an honorary grave , at a higher level through a state act . Sometimes a memorial plaque is put up in the town hall or in another prominent place on which the names of all honorary citizens are recorded; Often, streets and squares are also named after honorary citizens (but usually only after death). However, the honorary citizenship as such is usually not the reason for this, but the circumstances that led to its award also justify the designation.

Universities can appoint honorary senators or honorary citizens of the university in accordance with their statutes and their origins . B. Cardinal Karl Lehmann honorary citizen of the University of Mainz . This is based on their own tradition, according to which, since the Middle Ages , the universities formed a jurisdiction independent of the city in which they were located .

Honorary citizenship traditionally ends with the death of the recipient.

Since honorary citizenship traditionally only ends with the death of the honored person, it can also be revoked again during his or her lifetime.

The posthumous revocation of honorary citizenship is controversial , as this has already legally expired at this point in time.

January 16, 1946: Decision of the City Council of Braunschweig regarding the removal of the entries of Adolf Hitler, Hermann Göring, Dietrich Klagges and Baldur von Schirachs from the city's Golden Book as well as the revocation of honorary citizenship.

This was increasingly practiced especially for representatives of the Nazi regime in order to symbolically distance themselves from it. Adolf Hitler received them in around 4,000 cities (see Adolf Hitler as an honorary citizen ). For (living) war criminals, the loss of honorary citizenship was determined in accordance with Article VIII, Section II, Letter i of Directive 38 of the Allied Control Council in Germany of October 12, 1946. Of course, this required a judicial conviction and therefore did not apply to Hitler.

On the other hand, some municipalities argue that the honorary citizenship of the dead cannot be redeemed, since honorary citizenship as a personal distinction can only be granted and withdrawn to a living person. Such municipalities then occasionally symbolically distance themselves from the former honorary citizens without formal disqualification. a. 2013 in Schmidmühlen and 2016 in Lünen . This approach corresponds to the view of constitutional lawyer Theo Öhlinger : The withdrawal “is not legally necessary, but it is a symbolic act if certain people are honorary citizens who [...] do anything but contribute to the honor of the community, then of course it has makes sense to [...] publicly distance oneself. "

After German reunification , honorary citizenships that had been granted by the leadership of the GDR were withdrawn in municipalities in the new federal states . In 1992 the honorary citizenship of Berlin was revoked from the living Erich Honecker and posthumously Wilhelm Pieck , Friedrich Ebert junior as well as numerous partly living and partly deceased Soviet military personnel and functionaries.

The 1st Polish Armored Division liberated the Dutch city of Breda (which had been occupied by the Wehrmacht since May 1940 ) on October 29, 1944 . For this, all soldiers of this unit were made honorary citizens of the city.