The magistrate of Berlin was from 1808 to 1919 and as the magistrate of Greater Berlin from 1920 to 1935 and from 1945 to 1948 the highest executive body ( city ​​administration , city authority , city ​​council and government ) of Berlin . The word magistrate is derived from the Latin magistratus , which means something like office , holder of the office ( official ) or authority. The chairman of the magistrate was the mayor .

From 1948 there was then parallel in Berlin

After the withdrawal of Napoleon in 1808, the new city order “Order for all cities of the Prussian monarchy” came into force as part of the Prussian reforms under Freiherr vom und zum Stein . In Berlin, a magistrate was established with a mayor at its head and ten paid and fifteen unpaid city ​​councilors . With the regulation on the business procedure for the magistrate of Berlin of 1834, the position of the mayor in relation to the other magistrate members was significantly strengthened.

Magistrate of Greater Berlin from 1920

After the First World War , Berlin's urban order was reorganized with the Greater Berlin Act , which was passed on April 27, 1920 and came into force on October 1, 1920. In the 20 districts there were district offices with mayors subordinate to the first magistrate of Greater Berlin .

During the time of National Socialism , democratic institutions were eliminated or brought into line. On January 30, 1935, the German municipal code came into force, which was based on three principles:

During the Third Reich between 1937 and 1940, Julius Lippert held the office of Lord Mayor of Berlin as State Commissioner. After that, Ludwig Steeg took over the business of the Lord Mayor and provisionally the office of City President. 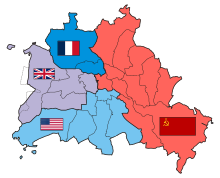 After the surrender of the Wehrmacht and thus the end of the war in Europe, the Soviet military administration set up an anti-fascist magistrate for the entire urban area of Greater Berlin on May 19, 1945 . This Magistrate Werner , named after the Lord Mayor, was supposed to ensure the most urgent needs of the population after the devastation of the air raids and the Battle of Berlin . The first post-war magistrate included the independent mayor Arthur Werner, his four deputies and 16 city councilors.

According to the Yalta Conference , the former German capital was to be divided into four sectors and ruled by a joint Allied command . It did not belong to the Soviet Occupation Zone (SBZ). The entry of the three Western powers into Berlin took place on July 1, 1945; the official adoption of the occupation statute by the Western Allies in their sectors took place on July 4, 1945.

The work of Magistrate Werner was closely monitored by all four occupying powers, whose interests drifted diametrically apart as the Cold War began. As a result of the forced unification of the SPD and KPD to form the SED , the latter dominated the magistrate. In the first free elections in Berlin on October 20, 1946 , the Berlin SPD , which had survived the forced unification, inflicted a heavy defeat on the SED. In the Magistrate Ostrowski elected by the City Council (StVV), the SPD formed a coalition with the CDU and LDP from December 1946 .

After Otto Ostrowski's resignation on April 17, 1947, the StVV elected Ernst Reuter (SPD) as his successor on June 24, 1947. Because he could not take up his post because of a Soviet veto in the Allied Command , Louise Schroeder (SPD) was Mayor of Berlin in the Reuter I magistrate until December 7, 1948 .

Against the background of the formation of a separate western state in the western zones, the transformation of the CDU and LDP parties into block parties in the Soviet Zone and their splits in Berlin, the dispute over currency reform in Berlin and the subsequent blockade of Berlin , the Soviet occupying power and SED were always hindering more the work of the magistrate in the eastern sector . In August 1948, the StVV was forced to move its headquarters from the East to the West sector because of disturbances organized by the SED, which the police and the occupying power watched inactive.

The election to the city council in December 1948 , decided by the Allied Command, had not been approved by the Soviet occupying power in the eastern sector. In the western sector, the result was the Reuter II magistrate . This first government of West Berlin was in office until January 1951. In West Berlin, the adoption of the Berlin Constitution in August 1950 led to the election of the House of Representatives on December 3rd . The Berlin House of Representatives elected the Reuter Senate as the first Berlin Senate on January 11, 1951 .

New year celebration of the magistrate in 1973 with Mayor Herbert Fechner , members of the armed organs and the Soviet armed forces

In the Eastern Sector, on November 30, 1948, an assembly of its elected officials and supporters called up on the initiative of the SED declared the magistrate to be deposed and installed a “democratic magistrate” in its place. After that the congregation broke up. The SMAD immediately recognized the Democratic Magistrate as the only legitimate one. The Democratic Magistrate could officiate until January 1953 without being controlled by a parliamentary representative body. Mayor Friedrich Ebert (SED) presided over him until 1967 .

After the founding of the GDR in 1949 resembled both in East Berlin ruling and the East German SED, so East Berlin in the "Democratic Sector of Berlin" valid legislation increasingly those of the GDR in effect for the 15th district of the GDR was . From January 1953, a “People's Representation Greater Berlin” existed in East Berlin by ordinance by the magistrate on the proposal of the democratic bloc . A first election for the people's representation took place at the same time as the Volkskammer elections in the GDR only in February 1957 according to the standard list there. The magistrate consisted of the Lord Mayor (OB) (chairman of the magistrate) with eight deputies, the secretary and eight other members. From 1977 it was called the Magistrate of Berlin, capital of the GDR .

"MagiSenat" between the turn of the century and reunification in 1990 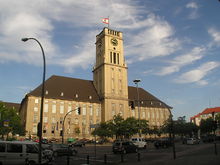 After the political change in the GDR, the monetary union and the imminent reunification of Germany , which also meant the reunification of Berlin, the divided city faced new, now common tasks. This was immediately clearest in the field of transport, as border crossing points (road and rail) were opened and new traffic flows had to be taken into account. But the city halves of East and West Berlin could no longer develop separately in all other inner-city areas of activity.

The politically responsible in both parts of the city recognized this historical necessity and took advantage of the opportunities that arose during this transition period. On June 12, 1990, under the direction of Walter Momper and Tino Schwierzina, the first joint meeting of the Senate and Magistrate took place in the Rotes Rathaus (seat of the Lord Mayor of East Berlin), then alternately in the Schöneberg Town Hall , the seat of the Senate and Governing Mayor , in the end only there.

At that time the Senate of Berlin (West) consisted of the governing mayor, one mayor and 13 senators ; the Magistrate of Berlin (East) made up of the Lord Mayor and 14 city councilors.

In this "MagiSenat" - so called in Berlin vernacular - the governing and lord mayors as well as senators and city councilors faced each other on an equal footing. Senate and magistrate bills were submitted jointly by the responsible senator and the city council before the resolution was passed. The subordinate administration had to be standardized and the different developments since 1948 had to be adapted to one another. A magistrate's office was set up in the magistrate based on the already existing senate chancellery . Coordinated structures should also promote the final unification of the city administration. The “MagiSenat” of Berlin had to continue to function as a joint state government even after German reunification after October 3, 1990 , as did the House of Representatives (western districts) and the city council (eastern districts). On December 2, 1990, all-Berlin elections to a unified legislature (the Berlin House of Representatives) took place. In this context, a uniform executive (the Senate of Berlin) was formed, in which the magistrate was integrated structurally and personally.

The Senate and the Governing Mayor of all of Berlin have had their seat in the Rotes Rathaus since 1991 .