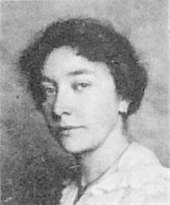 Louise Schroeder as a member of the Weimar National Assembly, 1919

The female MPs of the MSPD in the Weimar National Assembly on June 1, 1919. Louise Schroeder is in the back row, 4th from the left. 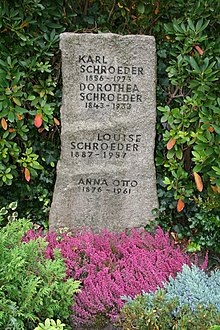 Schroeder was the daughter of a vegetable seller and a construction worker. After graduating from middle school, she became an employee of an insurance company.

She got involved in the socialist labor movement very early on , joined the SPD in 1910 and worked in the areas of social policy and equality for women .

She played a decisive role in the establishment of the Arbeiterwohlfahrt (AWO). From 1925 she worked as a lecturer at the Workers' Welfare School in Berlin. Louise Schroeder also had a teaching position at the German University of Politics (today: Otto Suhr Institute for Political Science at the Free University of Berlin ) until she was banned from working by the National Socialists . Repeatedly summoned for interrogation, she spent the time leading up to the end of the war in Hamburg, Berlin and Denmark. She tried to survive her time running a bakery, but refused to give the Hitler salute and was boycotted. Through friends, she got a job as an office worker in Berlin. After the war, she was one of the new founders of the SPD and AWO in Berlin. In 1948 Schroeder was a member of the founding committee of the Free University .

From 1946 to 1950 she was together with Otto Suhr in Berlin editor of the theoretical bi-monthly publication The Socialist Century .

The Weimar National Assembly was the first German constituent assembly (also functioning as parliament) to vote for women to vote (1919). Schroeder was elected as one of the youngest members and one of 41 women. That was just under 10 percent of the MPs, which was the highest proportion internationally at the time. She remained a member of the Reichstag until the National Socialists seized power in 1933 .

Since Schroeder was considered a prominent social politician, at the insistence of her party colleague Otto Suhr , the chairman of the city council, she agreed to join the Berlin magistrate as 3rd mayor . After the first elected post-war mayor Otto Ostrowski (SPD) resigned in the wake of tensions in the city council and the magistrate , Louise Schroeder took over his office on May 8, 1947. In June 1947 the city council elected Ernst Reuter (SPD) as Ostrowski's successor. Reuter was unable to take up his post because of Soviet objection. Louise Schroeder then remained in the office of Lord Mayor of Berlin until December 7, 1948, making her the first woman to be at the head of Berlin's political leadership.

Her term of office as Mayor of Berlin coincided in part with the Berlin blockade imposed by the Soviet administration and the Berlin Airlift as a reaction of the Western Allies to the blockade. Due to illness, she left the city during the blockade in August 1948, while Ferdinand Friedensburg (CDU) took over the office of mayor for three months. The contact person for the Allies as Lord Mayor was the elected Ernst Reuter during the entire airlift.

Following the December 1, 1948 fiscal division of the city (by the separate, of the victorious Western powers of Trizone outgoing currency reform of 1948 ran out) Ernst Reuter was nevertheless elected on December 7, the mayor of the new West Berlin. Under him, Schroeder continued to serve as mayor of the West Berlin magistrate (until January 18, 1951).

In 1949 Schroeder was traded as a possible candidate of the SPD for the office of Federal President against Theodor Heuss , but could not prevail against her party colleague Kurt Schumacher .

In 1949 Schroeder received the Golden Medal de la Ville de Paris . In 1952 she was awarded the Great Cross of Merit with a Star . On April 2, 1957, she was the first woman to be named honorary citizen of the city of Berlin. A hall in the Rotes Rathaus in Berlin-Mitte bears her name.

In 1998 the Berlin Senate donated the Louise Schroeder Medal .