Altona / Hamburg boundary stone from 1896 in Brigittenstrasse, which is now in the Hamburg-St. Pauli lies

Altona-Altstadt is a district of Hamburg in the Altona district . The district boundaries encompass the core area of ​​the Holstein city ​​of Altona (Elbe), which was independent until 1938 .

The district borders in the west and northwest with Kaistraße, Museumstraße, Max-Brauer-Allee and Holstenstraße on Ottensen and Altona-Nord , in the north with Stresemannstraße on the Sternschanze district , newly formed in 2006 , in the east with Bernstorffstraße, Kleine Freiheit, Holstenstraße, Pepermölenbek , Drum Street and Antonist Street on St. Pauli and in the south on the Elbe .

Until Altona was incorporated into Hamburg in 1938, the border ran further east: from the shoulder blade , along the Grüner Jäger, east of Bleicherstraße and Grosse Freiheit , then between Finkenstraße and Herrenweide to Bachstraße (today Pepermölenbek) and with this to the Elbe. It was then moved to the west in favor of St. Pauli to the Holstenstrasse – Kleine Freiheit – Bernstorffstrasse line; In the south, a small area between Hein-Köllisch-Platz and Pinnasberg Altona was allocated for this purpose. As a result of this demarcation, the Große Freiheit, which is only typical for Altona (and especially not for the Hamburg area), and the Nobistor with the Altona city coat of arms and the monogram of King Christian VIII of Denmark has been in Hamburg-St. Pauli, while the St. Pauli Church, which gives this district its name, is now also in Altona, as is St. Pauli Fischmarkt street .

Altona was founded around 1535 as a fishing settlement in the county of Holstein-Pinneberg . According to legend, the nucleus and the reason for the name should have been a red beer pub owned by the fisherman Joachim von Lohe , around which craftsmen and fishermen settled - but in the opinion of the Hamburg council all too close ("too close") to the city limits. The geest slope between the later Nobistor and the Altona fish market in the area of ​​today's Pepermölenbek street is assumed to be the exact location .

With the County of Holstein-Pinneberg, Altona became part of the Duchy of Holstein in 1647 and was given over to the present sovereign King Friedrich III. elevated to a town by Denmark on August 23, 1664. Gradually it grew to become the second largest city in the entire Danish state . 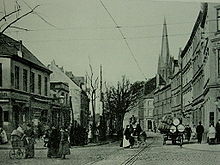 Before that, the city had to suffer cremation by Swedish troops in January 1713 during the Great Northern War . Starting in the east, house by house was set on fire by the Swedish soldiers of General Stenbock . This total destruction explains why, apart from the Palmaille roads, almost nothing is reminiscent of the Altona before the Swedish fire. However, Altona was built up and expanded again very quickly afterwards (see also Christian Detlev von Reventlow ).

In July 1943, Royal Air Force bombers destroyed large parts of the old town and, in particular, transformed the extremely densely populated border area to St. Pauli between Nobistor and Allee, Holstenstraße (in some areas with up to 800 people / ha) with workers, beneficiaries and socially declassed people and Grosse Elbstraße into a large field of ruins (→ Operation Gomorrah ). The quarter, which the authorities in the Weimar period called the “Abruzzo district” because of its politically and socially barely controllable population mix (workers, beneficiaries and socially declassified), became after the end of the war just like Altona's “more respectable” core around the old town hall and the Coin market not rebuilt.

Only the main church of St. Trinity was restored and could be preserved - like the Jewish cemetery opposite on Königstraße. Further to the west, in the direction of the town hall and the train station, the Palmaille streets in particular, with their upper-class buildings from the early 19th century, remained largely intact; next to the entrance to the Königstrasse S-Bahn station (corner of Behnstrasse and Struenseestrasse), the remains of the Heilig-Geist-Kirchhof have been integrated into a green area there.

Gravestones of long-established families on Struenseestrasse

In the destroyed part of the old town, due to the Neu-Altona planning, multi-storey apartment buildings were built in a relaxed construction, interspersed with individual high-rise buildings, north of the fish market, on the Hexenberg, again in high density. This "New Altona" stretches to the northwest with a green corridor along Holstenstrasse. This is to interconnected parks, a portion was in the 1980s by Walter Möller , one of the Bloody Sunday victims , Walter-Möller-Park called. Another part has been dedicated to the communist Emil Wendt since 2015 . Only between Thedestrasse and Max-Brauer-Allee, i.e. in the area of ​​Behn's urban expansion, were the old buildings still closed after 1945 , and active residents of the district succeeded in doing so from the beginning of the 1980s, whose preservation was still favored at the time Enforce concept of area rehabilitation .

Virchowstrasse with a typical cellar bar

The narrow streets with the repaired houses still show the same urban layout today as they did during the Weimar Republic - but without the problems at the time that the population density in the then densely populated German city brought with it: the inner block areas were mostly gutted, the apartments adapted to today's standards and, where possible, also added some green to the street space. On the other hand, this area is now also suffering from the effects of motorized individual traffic , despite traffic calming measures .

In this quarter north of the Große Bergstraße you can still find a lot of Altona city history:

Anyone who deals with the history of Altona repeatedly comes across street names that can no longer be found in the city map; This is mainly due to the fact that the streets were either not laid out again after 1945 or were renamed around 1950 (as a late consequence of the Altona incorporation), sometimes even later. Therefore, the old (left) and new (right) street names of the old town are compared here:

Main entrance of the old hospital on the avenue 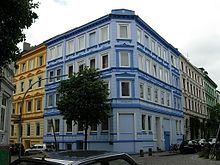 Names that only existed during the Nazi dictatorship (in brackets: name before 1933 or after 1945 )

Since the 1990s, there have been some long-term vacancies in shops in the Altona-Passage and in the former Frappant building on Goetheplatz, as well as the closure of “customer magnets” (such as Karstadt ). As of 2009, the area is a redevelopment area; IKEA has been interested in the Frappant complex, in which artists have settled since 2003, since the beginning of 2009 and opened its first inner-city full-range furniture store here in June 2014. In this context, two petitions for and against its settlement were initiated; the population voted for the construction with a three-quarters majority.

Altona-Altstadt belongs to the constituency of Altona for citizenship elections . The 2015 state election led to the following result: 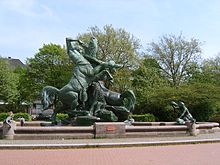 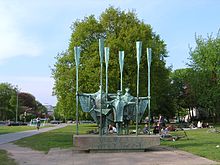 On the "Altona balcony"

After the Bruno Tesch Comprehensive School in Billrothstrasse was closed in 2004, there are still six schools in Altona-Altstadt: the Thadenstrasse elementary school, the Louise Schröder School (former Chemnitzstrasse elementary school) in Thedestrasse on a sub-area of ​​the former Bruno-Tesch -Gesamtschule, the Struensee-Gymnasium, the special school Carsten-Rehder-Straße, the Catholic School Altona and the all-day school Bernstorffstraße. In addition there is the technical school for social pedagogy II. The Gymnasium Allee is already in Altona-Nord .

A public book hall is located at Norderreihe 5.

The Federal Research Center for Fisheries is located on the Palmaille, and the Institute for Hydrobiology and Fisheries Science belonging to the University of Hamburg is just a stone's throw away in Olbersweg . Both research institutions cooperate with each other.