The Wedding is a Berliner locality in the district of Mitte . Wedding, mentioned in a document in the 13th century, was almost uninhabited for centuries until the 18th century. After the incorporation to Berlin in 1861, the population of Wedding increased. In 1920 it gave its name to the then Wedding district , which after the partition of Berlin belonged to the French sector of West Berlin . The district of Wedding in its current form emerged in 2001 from the western part of the dissolved district.

Wedding is already mentioned in two documents from the 13th century: In 1251 it was about "a mill in the area of ​​the village called Weddinge, built on the river named Pankow" and in 1289 about "the real fief and the one with the Homestead Wedding associated title of a fief ”.

Typical residential and commercial building in Wedding, around 1910

In the 13th century the village of Wedding was mentioned as a desert , i.e. as an abandoned settlement. The town's mill was sold to the Benedictine convent in Spandau , and the fiefdom on the outskirts of the village became the property of the city ​​of Berlin . In the 14th century, the area was still used by the citizens of Berlin for arable farming, after which it was completely overgrown with pines and oaks and was called "Berliner Stadtheide". In the 17th century a manor was laid out in the area of ​​today's Nettelbeckplatz , which was handed over to the Brandenburg elector in 1603 . He had a Vorwerk built from it. The estate was thus the electoral domain and legally no longer part of the city of Berlin.

In connection with the expansion of Berlin and the wood required for it, the Stadtheide was almost completely cleared, so that the land around Wedding became deserted. In the 18th century, the extensive settlement of the area north of Berlin and thus also of Wedding began. In 1778 the first colonist houses were built in the area of ​​today's Weddingplatz. In 1782 Frederick II founded a colony, which was named Wedding or Neu-Wedding because of the proximity of the estate.

In 1861 Wedding was incorporated into Berlin. He gave his name to the Wedding district, founded in 1920 and existing until 2000 , which encompassed the area of ​​today's districts of Wedding and Gesundbrunnen .

After the Second World War in 1945 until German reunification in 1990, the Wedding district belonged to the French sector of Berlin.

Since the 1970s, numerous - often Turkish - guest workers and other immigrants have settled in the traditional working-class district because there was inexpensive living space there, which gave the district a multicultural character.

After the Wedding district merged into the new, larger Mitte district in 2001, Wedding and Gesundbrunnen received the status of Berlin districts.

Residents and often also the Berlin media use the term “Wedding” to refer to the area of ​​the former Wedding district.

Wedding is one of the few place names that are used with an article in German ; Wedding is reminiscent of its origins as the estate and Vorwerk built by the nobleman Rudolf de Weddinghe , and consequently one said: “He lives on Wedding.” (In the city ​​dialect : “He lives uff'm Wedding” or “on Wedding”. ) Today, however, “in Wedding” is preferred. 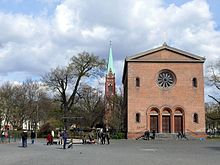 Wedding is largely characterized by old buildings with rear buildings from the Wilhelminian era and new housing estates from the 1920s to 1950s. While in the old district of Wedding the number of apartments in Wilhelminian style buildings, which mainly characterize the area south of Seestrasse, is slightly higher than that of apartments in residential areas, none of the other Berlin districts has a similarly high proportion of these settlements. The African Quarter between the Rehberge Park and the Schiller Park is characteristic here . The settlement buildings of the 1920s and 1930s, surrounded by typical green spaces, are decisive here. Worth mentioning are especially the the UNESCO World Heritage belonging settlement Schiller Park and the Friedrich Ebert settlement . In addition, there are multi-storey buildings for social housing from the 1970s and 1980s.

The Erika-Heß-Eisstadion is located near the Reinickendorfer Straße underground station and Wedding train station . In winter it is the home of the Berlin ice hockey club FASS Berlin . Because of the few ice rinks in Berlin, the ice rink was also the second home of ECC Preussen Berlin from 2009 to 2012 . 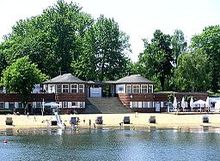 Wedding has several nationally known institutions that are among the largest employers in the city.

Entrance to the Rudolf Virchow Hospital on Augustenburger Platz

Universities and other schools

ATZE music theater in the Max-Beckmann-Saal on Luxemburger Strasse

Kurt Schumacher House of the SPD

The underground platform at Wedding station ( line U6 )

The following public transport routes exist in the Wedding district :

Portal: Wedding  - Overview of Wikipedia content on the subject of Wedding

Districts of Berlin in the Mitte district