The Wedding district essentially developed from three settlement centers. The agricultural settlements around the Vorwerk Wedding , the spa and park facilities at Friedrichs-Gesundbrunnen, the later Luisenbad and some smaller colonist settlements.

Wedding was mentioned as a village as early as 1251. A certificate from Margrave Otto III. and Johann I. stated that "our loyal Friedrich von Kare, soldier, had built a mill in the area of ​​the village, which was called Weddinge, on the river called Pankowe". But soon the village fell desolate . As early as 1289 the fiefdom passed to the city of Berlin, Otto V wanted to thank the city for services.

The city used the fiefdom for agriculture, or leased it. The first settlement core of the later district emerged at the beginning of the 17th century with the Vorwerk Wedding. After leasing it for a long time, she bought all rights back in 1817. Since the city of Berlin now owned most of the land in the later district, it was able to quickly parcel out the land and sell the individual plots on for later development.

At the end of the 19th century, Wedding and Gesundbrunnen developed into a densely built-up working-class district due to the ongoing rural exodus and new large companies such as AEG , Osram or Rotaprint . The workers lived densely packed in so-called tenement houses . The Meyers Hof tenement in Ackerstraße was considered a unique example of extremely compact and speculative development. The population of Wedding and Gesundbrunnen rose from 16,668 in 1867 to 240,662 in 1910.

In 1915, part of the Plötzensee manor district bordering Wedding was incorporated. On October 1, 1920, the Greater Berlin Act from Wedding, Gesundbrunnen and parts of the Oranienburger Vorstadt and Rosenthaler Vorstadt formed the 3rd administrative district of Greater Berlin with now 337,193 inhabitants. The district, which was not divided into official districts, was given the name Wedding .

Workers and the Early Labor Movement

The beginning of industrialization ensured that wage workers, craftsmen and small businesses in particular lived in Wedding. These formed the nucleus of the labor movement. Political and social life in the 19th century was dominated by the SPD and its predecessor and support organizations. In Wedding, trade unions and workers ', sports and singers' clubs spread. The Wedding belonged (along with Moabit and the Oranienburger suburb ) to the Berlin constituency VI, who in the general election in 1877 with Wilhelm Hasenclever first-ever Social Democrats in the Reichstag sent. Other important social democrats who entered the Reichstag via constituency VI were Wilhelm Pfannkuch and, in 1890, Wilhelm Liebknecht . After Liebknecht's death in 1900, Georg Ledebour , who later founded the USPD, followed .

As a counter-movement to the socialist workers, Christian workers' associations loyal to the emperor were also involved, trying to bind the workers to the empire through social work . Social institutions and later housing estates were built. In 1865 Wilhelm Boegehold , pastor of the St. Elisabeth parish, founded the Lazarus Hospital and Deaconess House , which was funded with large sums of money by industrialist Louis Schwartzkopff , among others . Pastor Carl Schlegel founded the Paul-Gerhardt-Stift on Müllerstrasse in 1876 . In addition to the pastor and Schwartzkopff, Adolf Stoecker , founder of the city ​​mission and politician, Constantin Liebich and the architects Heinrich Theising and Ernst Schwartzkopff .

Burning Kapernaum Church after a bomb attack in 1944.

The underground line C (today's line U6) went into operation in 1923, which led from Seestraße station to Halleschen Tor in Kreuzberg . 1930 The opening followed metro line D (today U8) leading from the station Gesundbrunnen to station Leinestraße in Neukölln led.

The industrialization shaped the Wedding. In no other district of Berlin at the time was the proportion of workers so high. 50 to 60 percent of the residents of the Wedding were workers at the time. The most important employer was AEG with 57,000 employees in Wedding alone, followed by Bergmann Elektrizitätsgesellschaft (10,000 workers), Dr. Paul Meyer AG (metal processing, 3,000 jobs), the chocolate manufacturer Theodor Hildebrand & Sohn (2,500 employees), the cake manufacturer Gebrüder Stollwerck (1,500 employees), Berliner Maschinenbau AG (700 employees), Berlin's largest bakery, Wittler (350 employees), as well of Schering AG .

During the Weimar Republic , Wedding was also a stronghold of the workers' parties and was known as " Red Wedding ". The SPD and KPD had electoral strongholds here. In the 1932 Reichstag election, the KPD achieved its best election result of its existence with 47.9% in Wedding. Even in the Reichstag election in March 1933 , the KPD had the best election result of all parties in the district. The level of organization of the SPD and KPD in Wedding was high. In addition to the KPD, the Communist Youth Association , the Revolutionary Trade Union Federation and the Red Front Fighters Association were also active in Wedding . Both parties and other left groups held marches, rallies and agitprop. The windows of numerous houses were decorated with the red (communist; KPD) or black-red-gold (republican; SPD) flag. From May 1, 1929, there were bloody clashes between police and demonstrators, which came to be known as Blutmai . In the clashes around Kösliner Strasse that lasted several days , 19 workers were killed and 250 injured. A memorial stone on the corner of Wiesen-Uferstraße commemorates this today.

In the election for the 8th German Reichstag on March 5, 1933, the fewest votes of all Berlin districts came together for the NSDAP (25.9%). The KPD, on the other hand, came in at 39.2%. The SPD came to 22.8% (Statistics Berlin). These results show, among other things, why the former workers' district was also called "Red Wedding".

In 1938, the district boundaries were reformed in Berlin . Parts of the neighboring districts of Charlottenburg and Pankow were newly added to the Wedding district. The population of the district grew by 11,047 inhabitants and the area increased by 238  hectares . The district suffered severe damage during World War II . After Schulstrasse, Seestrasse and Badstrasse formed the main battle line for days at the Battle of Berlin in 1945, around a third of the buildings in Weddingen had been destroyed or badly damaged by the end of the war.

The number of murdered Jews in Weddingen is not known. But according to the district administration from 1947, at least 358 men, 265 women and 49 children, or 672 people, fell victim to fascism for “racist” reasons. Furthermore, it can be proven that 98 Weddingers died because of their resistance to National Socialism . More than 1,367 people were arrested for resistance and were charged with preparing for high treason, treason, devastating military strength, insidiousness or insulting the leader. In addition to the demonstrable cases, there are many more. 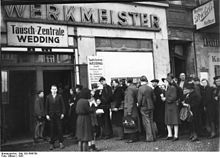 Rush to the exchange center in the Wedding district, 1947

Together with the Reinickendorf district , the Wedding district formed the French sector of Berlin from 1945 to 1990 . In 1955 the district received its coat of arms. It shows a winged arrow with a black border in a red shield, adorned by battlements with a Berlin coat of arms.

The 1950s and 1960s were marked by reconstruction. Associated with this was the construction of numerous new residential buildings, for example in the Ernst-Reuter-Siedlung , which followed the demolition of many tenements or their remains, including Meyer's Hof . In 1956, the extension of underground line C from Seestraße station to Kurt-Schumacher-Platz was put into operation. In 1961 the underground line G (today: line U9) was opened, which created a direct connection from Leopoldplatz to the western city . In 1976 this line was extended from Leopoldplatz to Osloer Straße station. In 1977 underground line 8 was also extended from Gesundbrunnen to Osloer Straße.

With the opening of the Jakob-Kaiser-Platz- Seestrasse section, the district was reached by the Berlin city motorway in 1973 . In the 1980s, a number of industrial production sites were given up (AEG and Osram) or went bankrupt (Rotaprint).

As part of the administrative reform, the Wedding district was merged with the Tiergarten and Mitte districts to form the new Mitte district on January 1, 2001 . This was accompanied by the division of the former Wedding district along a line Reinickendorfer Straße - Chausseestraße into the two official districts of Wedding west of this line and Gesundbrunnen east of the line.

The population structure of the former Wedding district was characterized by migrants and people with low incomes.

Elections to the district assembly

These partnerships continue to exist with the Mitte district, with the exception of the latter, which was followed by friendly relations with the Lahn-Dill district.