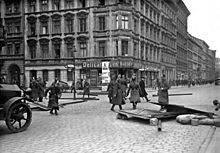 The Blutmai (also May riots at the time ) are the riots in Berlin from May 1 to 3, 1929 , in which the police cracked down on unauthorized demonstrations organized by the KPD , killing 33 civilians and injuring numerous demonstrators and bystanders.

The name Blutmai goes back to the KPD's call to strike on May 2, 1929, which said: “ Zörgiebel's Blutmai - that is part of the preparation for the imperialist war! The slaughter among the Berlin workers - that is the prelude to the imperialist mass slaughter! "

History of the conflict

As early as 1924, open-air demonstrations were banned on May 1 , without any significant incidents. In 1929, however, the domestic political situation in Germany was so heated that serious unrest broke out.

The ban on speaking against Adolf Hitler , the leader of the NSDAP , was lifted on September 28, 1928 by the Prussian Interior Minister Albert Grzesinski ( SPD ), and on November 16, Hitler gave his first public speech in the Berlin Sports Palace . This heated up the domestic political situation so that it came to violent clashes with many dead. The Berlin police president Karl Zörgiebel (SPD) then banned political gatherings in the open air on December 13, 1928. This ban was extended to all of Prussia on March 21, 1929 by Grzesinski .

In April 1929, the validity of the ban on demonstrations was confirmed for May 1st, while the KPD held on to the call for May rallies. This led to allegations that the KPD was planning a riot and was willing to accept numerous deaths: “200 dead on May 1st?” Was the headline of Vorwärts , the SPD's party newspaper. Zörgiebel, on the other hand, was accused of wanting to prevent the KPD demonstration as "administrator of the social democratic party executive" ( Carl von Ossietzky after the "Blutmai") ​​because it was feared that the KPD could mobilize more people than the SPD and trade unions.

The barracking of the Berlin police and the preparation for the expected street fighting are held responsible for the hard reaction of the police to the demonstrations.

The riots from May 1st to 3rd

On April 30, 1929, the KPD distributed leaflets on which it was untruthfully claimed that the ban on demonstrations had been lifted. On the morning of May 1st, around 8,000 people were traveling in trains of 50 to 500 people, mainly in the Berlin working-class districts of Wedding and Neukölln , significantly fewer than the KPD expected and the police feared. May 1st, 1929, fell on a Wednesday; in Prussia, unlike in some other countries in Germany, it was not a public holiday.

The police took action against the demonstrators in the morning using batons and water hoses connected to hydrants , and occasional warning shots were fired.

Street barricade in the Rollbergviertel (Neukölln)

The SPD and unions adhered to the ban on demonstrations and held their May rallies in the hall. After his return from the SPD rally in the Sportpalast, Max Gmeinhardt, a member of the SPD and the Reichsbanner Schwarz-Rot-Gold , was shot by a police officer when he did not immediately comply with the request to close his apartment window on Kösliner Strasse . The conflict escalated. In the afternoon, a small barricade was erected as an obstacle for police vehicles . The police escalated the conflict and used armored vehicles with machine guns towards evening. The use of these vehicles was actually only intended for resistance with firearms. The police shot at residential buildings with red flags hanging on them.

On May 2, the KPD called for mass strikes as a protest against police violence, which was followed by around 25,000 workers. Police violence in Berlin continued. The police combed the working-class neighborhoods on May 2nd and 3rd, searched homes and arrested numerous people. Armored vehicles with machine guns were used again and several people were shot. There were tumults in the Reichstag, Wilhelm Pieck described Zörgiebel as a “murderer”, while the SPD defended the police leadership. Zörgiebel himself called on the police for moderation on the one hand, but contributed to the escalation by issuing a "traffic and light ban" by actually putting large parts of Berlin under a state of emergency : there was a strict curfew, windows on the street had to be closed, the rooms were not allowed to be lit. The Red Flag , the central organ of the KPD, was banned for seven weeks.

Shortly before midnight on May 3, 1929, Charles Mackay, a New Zealand journalist, was shot by the police, presumably because he did not understand the instruction to leave the street. He was the last to die, the riots subsided so far by May 6th that the "traffic and light ban" was lifted again.

State agencies took action against the party and its organs under the charge that the KPD had provoked the unrest and attempted to rebel. The Red Front Fighters Association (RFB) was banned in Prussia on May 3, Reich Interior Minister Carl Severing (SPD) issued a nationwide ban on May 6, the ban was pronounced by the Conference of Interior Ministers of the Länder on May 10 and continued until May 14 in proclaimed to all countries. A ban on the KPD was considered, but abandoned as not promising.

A total of 33 civilians were killed in the riots, 198 were injured, and the police were injured 47 (figures from Buchner, Schirmann count 32 deaths, other sources up to 38). Contrary to the allegation of the police that the demonstrators had resisted with firearms, it could be proven that the only policeman with a gunshot wound had taught himself this in an accident a few days earlier. According to official information, the ammunition consumption of the police was around 11,000 rounds.

There was no official investigation into the police assault and no police officers were charged. The trial lawyer Hans Litten founded with Alfred Doblin , Heinrich Mann and Carl von Ossietzky a "committee to investigate the Berlin Maivorgänge" to support the accused workers. Of the 1,228 arrested, around one in ten was directly or indirectly connected to the KPD, 89 were members of the RFB. There were 43 convictions, the total of all sentences amounted to around ten years in prison, the highest individual sentence was nine months.

The KPD distanced itself from the accusations of having instigated an uprising, but tried to use the events for propaganda purposes. At the funeral of the victims of the Blutmai on May 8th, Ernst Thälmann declared : "The Communist Party shows its full solidarity with those who have stood on the barricades". The justification of police violence by leading representatives of the SPD served the KPD as confirmation that they were “ social fascists ”. For the agitprop culture of the KPD, the writers Klaus Neukrantz popularized this in 1931 in his reportage-like novel “Barricades am Wedding” and Erich Weinert , together with the composer Hanns Eisler , in the song “ Roter Wedding ”. The KPD's attitude towards the events deepened the rift in the workers' parties. Ultimately, this benefited the National Socialists, who were already able to gain in the election in Saxony on May 12th.

The events surrounding the Blutmai, in particular the fictitious gunshot wounded by a police officer, form a storyline in the television series Babylon Berlin .