The title of this article is ambiguous. Further meanings are listed under May Day (disambiguation) .

Line-up for the May demonstration in Hamburg (2007)

The May Day is a day of work , days of the labor movement , international day of struggle of the working class or as May Day called. It is a public holiday in Germany , Liechtenstein , Luxembourg , Austria , Belgium , parts of Switzerland and in many other countries . 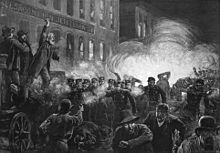 This cut from 1886 was the most popular illustration of the Haymarket affair. It incorrectly shows Samuel Fielden's speech, the subsequent bomb explosion and the subsequent shooting at the same time . 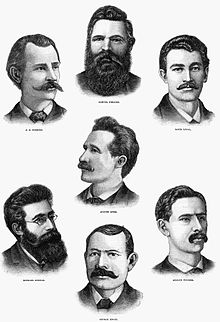 The seven anarchists sentenced to death. The eighth, not shown, was sentenced to 15 years in prison.
→ Main article : Haymarket Riot

At the beginning of 1886 the North American labor movement called for the implementation of the eight-hour day for a general strike on May 1 - based on the mass demonstration on May 1, 1856 in Australia, which also called for the eight-hour day. May 1st was traditionally also the moving day , on which changes in job or place of residence were often carried out. There were then mass strikes and demonstrations in the industrial regions.

At that time, the majority of workers in a Chicago agricultural equipment factory also expressed their solidarity with the management and threatened strikes because they were dissatisfied with the 12-hour day with an average daily wage of three US dollars. The management responded with mass lockouts and tried to fill the now 800 to 1000 vacancies with new immigrants . As a result of the campaigns of the socialist Arbeiter-Zeitung , however, only 300 new workers registered, while in other cases workers stood in line at the factory gates. That was and is still regarded as a great victory for the union .

On Saturday, May 1, 1886, thousands of workers who went on strike demonstrated and took part in rallies that took place across the United States. On the evening of May 3, 1886, August Spies , the editor-in-chief and publisher of the Arbeiter-Zeitung , gave a speech at a workers' meeting in Chicago's Haymarket. The Haymarket rally - the origin of working class consciousness in the USA - was followed by a strike that lasted several days in Chicago and initially led to a violent clash between demonstrators and the police on May 3, in which two demonstrators were killed. The violence escalated at a protest rally the following day. After the police stormed the peaceful gathering, a stranger dropped a bomb that instantly killed a police officer and injured numerous police officers and demonstrators. Six other police officers died as a result of the bomb attack. In the ensuing skirmish, which went down in US history as the Haymarket Affair , more than 200 workers were injured; the number of deaths is given as seven policemen and an estimated three times that number on the part of the assembled workers.

Eight anarchists who organized the rally were arrested and charged with conspiracy. Four of them, including the managing editor and editor of the Arbeiter-Zeitung , August Spies were executed by hanging, one committed in his cell suicide . The three who were still alive were pardoned six years later.

At the founding congress of the Second International between July 14th and 21st, 1889, May 1st was proclaimed "Day of Struggle of the Labor Movement" in memory of the victims of the Haymarket Riot. On May 1st, 1890, this "day of protest and remembrance" was celebrated for the first time with mass strikes and mass demonstrations all over the world.

Title page of the Frankfurter Volksstimme from May 1, 1901 with the May celebration slogan

Protesters on Augustusplatz to celebrate May Day, 1950.

Berlin: "Combat demonstration" on May 1, 1987 in Karl-Marx-Allee

The attempt by the Weimar National Assembly to make May 1st a public holiday on April 15, 1919, only had limited success in 1919. The SPD , DDP and parts of the center voted for the law, which was limited to May 1, 1919 . While the right-wing opposition ( DNVP , DVP ) and large parts of the center rejected the introduction of Labor Day as a public holiday, the USPD did not go far enough with the law; it also demanded the introduction of November 9th as a revolutionary holiday . The so-called Blutmai ( Berlin 1929) made the contradictions between KPD and SPD clear.

After the Second World War , May 1, 1946 was confirmed by the Allied Control Council . May rallies were only allowed to be held to a limited extent.

May 1st is a public holiday in the Federal Republic of Germany according to the public holiday laws of the federal states . The official designation in Germany is regulated by the laws of the individual countries. In North Rhine-Westphalia , May 1st is celebrated on the basis of the North Rhine-Westphalian Public Holidays Act as the day of commitment to freedom and peace, social justice, reconciliation between peoples and human dignity (abbreviated as the day of peace and reconciliation between peoples ).

In the GDR and other socialist countries, May 1st was celebrated as the “International Fight and Holiday of the Working People for Peace and Socialism” with elaborate May parades and reference was made to the traditions of the international labor movement. The symbol of May 1st is the red carnation .

Since the 1980s, alongside the organized political demonstrations, there have also been regular riots in the Federal Republic, especially in connection with the May 1st demonstration in Kreuzberg (Berlin).

In addition, there has been the international EuroMayDay since 2001 . Its central concern is to give expression to the most diverse forms of precarization in work and life which, in the opinion of the organizers, are not (no longer) organized by the classic institutions of the labor movement and the left.

In Austria, rallies have been taking place on the 1st of May since 1890. The Viennese workers organized z. For example, on May 1, 1890, in Vienna's Prater, with more than 100,000 participants, the largest rally ever to be seen in the city. The Arbeiter-Zeitung , founded in 1889 , referred to the fact that the May celebration took place in the Prater, a large green area, and wrote in May 1890:

“It is very beautiful, May 1st, and the thousands of bourgeois and petty bourgeoisie will certainly gladly allow the hundreds of thousands of proletarians to experience the famous awakening of nature, which all poets praise and of which the factory dweller noticed so little, in close by. "

Until 1918 the Social Democratic May rallies took place annually in the Prater; During the First Republic, they were moved to Vienna's Ringstrasse , where people marched in front of the town hall of Vienna , which had been under social democratic rule since 1919.

The Christian labor movement organized the first May rally in 1893 after Pope Leo XIII. had expressed in the encyclical Rerum Novarum on the workers question. Over the years, May 1st has increasingly been declared a day off. In 1907, for example, the day was linked to rest in 62% of the collective agreements.

In the First Republic , May 1st and November 12th - declared as the day of the proclamation of the republic as the first national holiday - on April 25, 1919, were set as "general rest and festive days". However, the May celebrations of the Social Democrats were banned by Chancellor Engelbert Dollfuss in 1933 at the time of the beginning of Austrofascism ; From 1934 onwards, the dictatorship government celebrated the introduction of the May constitution of the corporate state on May 1st, which is now a national holiday .

In the years of National Socialism , May 1st was the “ Day of German Labor ” (also: “Day of National Labor”) and again a public holiday. At that time, employers and employees were combined in the German Labor Front .

The great May rally of the socialists takes place in Vienna . After rallies had taken place in the districts up to then, they went for the first time in 1921 from various meeting points in the districts via Vienna's Ringstrasse to Rathausplatz , where the final rally took place. However, the current shape dates back to 1929. In 1926 there was a torchlight procession of the young workers for the first time the evening before. It could not take place between 1933 and 1945. In 1946, 200,000 people marched past the town hall and in 1947 there was another torchlight procession by the socialist youth . In 1981 the march was overshadowed by the terrorist attack on Heinz Nittel , who was on his way to the celebrations.

Decorated Viennese tram on May 1st, 1976

From 1913 to 1998, the city's own transport company did not begin to operate until around 1 p.m. on May 1, to give employees the opportunity to take part in the May march.

Participation in the May rally of the SPÖ in Vienna was indicated by the party for the first time in 2018 with 120,000 participants, which is said to have been an increase compared to previous years. When the SPÖ again spoke of 120,000 participants in 2019, police aerial photographs revealed a number of only 12,000 participants.

In Switzerland , only August 1st is regulated nationwide. Other holidays, as well as the 1 May, cantonal regulated (see also holidays in Switzerland ):

Due to the pandemic, rallies and public gatherings are only possible to a very limited extent in Switzerland in 2020 and 2021. In 2020, the Swiss Federation of Trade Unions (SGB) organized a “large-scale digital rally”. In 2021, the trade union federation throughout Switzerland is calling for a digital May Day under the motto “Time for social change”, supplemented by individual, smaller and decentralized campaigns in Switzerland.

In the city of Zurich , the Zurich May Day Committee, together with the Trade Union Confederation of the Canton of Zurich (GBKZ), are organizing the May Day celebrations - as a folk festival around the May Day rally. This festival lasts for several days and is attended by tens of thousands every year, according to the organizers. More recently, the rallies have been overshadowed by violent "post-demonstrations", in which representatives of the black bloc and other " chaos " engage in street fights with the police. On the other hand, most people like to take the day off as a day of relaxation.

May Day is not a public holiday in the Protestant churches. In the pericope order , however, there is also the topic of “work”. The keywords with which this topic is provided also includes the “Labor Day”, so that there is the possibility of a “supplication service for blessed work”, which can also be celebrated on the day of harvest or on the hail holiday. The liturgical color is purple.

In reaction to the labor movement of the 19th century, which was often oriented towards socialism , the 1st of May was declared by Pope Pius XII. (Term of office from 1939 to 1958) declared in 1955 to commemorate Joseph the Worker . According to the Bible, the husband of Mary and foster father of Jesus worked as τέκτων ( téktōn , building craftsman) and is traditionally considered the patron saint of workers.

The Bavarian Duke Maximilian I declared Maria “ Patrona Bavariae ” in 1616 and introduced May 14 as a feast day for his rule. In the course of the revision of the calendar of saints after the Second Vatican Council , the day of remembrance was brought forward to May 1st; it is still celebrated in the dioceses of the Freising Bishops' Conference (Bavarian and Franconian dioceses, plus the diocese of Speyer ).

In many English-speaking countries, Labor Day is equivalent to Labor Day on May 1st. The following section only lists this.

Celebrations for the first May Day of the Ottoman period in Skopje , 1909 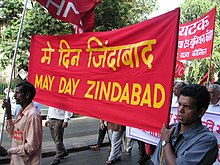 May 1st demonstration in Mumbai , India

Commons : May 1st  - collection of pictures, videos and audio files