The title of this article is ambiguous. For further meanings see Duchy of Bavaria (disambiguation)

Coat of arms of the Duchy of Bavaria 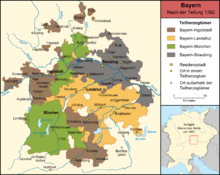 Bavaria at the division in 1392

The Duchy of Bavaria was a duchy within the Holy Roman Empire , which as a territorial duchy was essentially in the area of ​​today's Free State of Bavaria (region DE-BY , but also AT311, AT335). The capital and residence was Munich as well as Landshut , Ingolstadt and Straubing at the time of the partial duchies .

The forerunner was the Bavarian tribal duchy . From 1180, the Wittelsbach dynasty provided the rulers of Bavaria, and from the 12th to the 15th centuries there were several divisions that only came to an end with the Primogeniture Act of 1506. Bavaria took a leading position in the Counter Reformation and emerged from the Thirty Years' War with territorial gains. In 1623 Bavaria rose to become an electorate . Since the electoral dignity of the Dukes of Bavaria was obtained in 1623 until the Bavarian electoral dignity expired in 1806, the term electorate of Bavaria was used , even if the duchy de jure continued to exist.

The forerunner of the territorial duchy of Bavaria was the Bavarian tribal duchy , which can be traced back to the years 551/555. In 976 a newly created Duchy of Carinthia was separated from Baiern. In 1154 the duchy was reduced to the Marcha Orientalis and given to Heinrich the Lion of Guelph . In 1180 the "younger Bavarian tribal duchy" ended with the exile of Henry the Lion and the separation of Styria as a separate duchy.

Bavaria's beginnings as a territorial state

In 1180 Emperor Friedrich Barbarossa enfeoffed Count Palatine Otto von Wittelsbach with the Duchy of Bavaria. The carpet from around 1610 is in the Munich Residenz.

From 1180 to 1918 the Wittelsbach rulers were the rulers of Bavaria, first as dukes and later as electors and kings . As Count Palatine Otto VI in 1180 . von Wittelsbach when Otto I became Duke of Bavaria, the Wittelsbachers had little ownership. An attempt to re-acquire Styria , which had been detached from Bavaria in 1180 , ultimately failed due to the unsuccessfulness of the uprising of the Styrian nobility in the Landsberger Bund against Duke Albrecht I , which was supported by Bavaria significantly expanded. 1214 to Otto's son was Ludwig I of Wittelsbach with the Rhine Palatinate invested . Newly acquired land was no longer given as a fief , but administered by its own servants. Mighty families of counts, such as the Counts of Andechs and von Bogen, also died during this period. When the Counts of Andechs died out with Otto von Meranien in 1248 , the former south-western part of the country did not return to Bavaria, but fell to the Counts of Tyrol . The ducal suburb had shifted several times during this time, initially under the first two Wittelsbachers from Regensburg to Kelheim and then to Landshut until 1255 .

Since the Wittelsbach family, like many ruling houses of that time, did not prefer the first-born in succession, in 1255 there was a division into Upper Bavaria with the Palatinate, the Nordgau with its headquarters in Munich and Heidelberg and Lower Bavaria with its headquarters in Landshut and Burghausen . The distinction between Upper and Lower Bavaria (see government districts ) goes back to this today . Duke Ludwig the Strict of Upper Bavaria benefited from the death of his nephew Konradin in 1268 , and for the first time areas of the Duchy of Swabia fell to the Wittelsbach family. With the recognition of the borders to Salzburg (in today's Rupertiwinkel ) by Ludwig's brother Duke Heinrich XIII. the last phase of the replacement of the Archdiocese of Salzburg from Bavaria began. 1275 Salzburg western boundary was the Chiemgau by the Lower Bavarian Duke confirmed . When the Archbishop of Salzburg issued its own regional order in 1328, Salzburg became a largely independent state within the Holy Roman Empire.

With the Schnaitbacher deed and the Ottonische Handfeste , the Wittelsbachers granted the estates due to financial difficulties at the beginning of the 14th century.

In 1340 the Lower Bavarian dukes died out and were inherited by the Upper Bavarian duke. Before several new state divisions from 1349, Bavaria reached a new peak of power with the Upper Bavarian Duke Ludwig IV the Bavarian , when he became German king in 1314 and was the first Wittelsbacher to receive the dignity of emperor in 1328. The areas of Brandenburg (1323), Tyrol (1342), Holland , Zeeland and Friesland as well as Hainaut (1345) were lost again under his successors. Tyrol fell to the Habsburgs with the Treaty of Schärding in 1369 , the Luxembourgers followed in Brandenburg in 1373, and the Dutch counties fell to Burgundy in 1436 . In the house contract of Pavia of 1329, Emperor Ludwig divided the property into a Palatinate line with the Rhine Palatinate and the later so-called Upper Palatinate and an Old Baier line. With the Golden Bull of 1356, the electoral dignity for the old Bavarian line was also lost to the Palatinate until 1628. Bavaria and Palatinate were not reunited until 1777.

While the Roman-German Emperor Friedrich III. Since 1477 was involved in a catastrophic war with King Matthias Corvinus of Hungary , the Bavarian dukes from the House of Wittelsbach in southern Germany gained in power and prestige. Friedrich III. finally lost all of his lands to the King of Hungary, had to wander around the empire almost completely penniless and be endured by monasteries. His nephew, Duke Sigmund of Austria , pledged the County of Tyrol to the Bavarian dukes and sold them in 1487, with the exception of Vorarlberg .

In this situation, Emperor Friedrich III stepped. a, put Sigmund under guardianship and expelled all Wittelsbach-minded nobles from his countries. Among them were some gentlemen who were in castle law with the Confederation, z. B. Count Georg von Sargans and Count Gaudenz von Matsch, who then raised the mood against Habsburg in the Swiss Confederation. To counter the Wittelsbachs, united in 1488 to Habsburg initiative, the South German imperial cities, which in the nobility of the St. George shield united South German nobility, the Count of Württemberg and the country Sigmund, Further Austria and Tyrol , in the Swabian League . The confederates turned down the invitation to join. The Swabian Federation was now the strongest power in southern Germany, alongside the Confederation and the Duchy of Bavaria. In 1491, at the instigation of France, the Confederation concluded a friendship and neutrality treaty with the dukes of Bavaria.

While the Landshut Duke Georg had already withdrawn, the Bavarian-Munich army stood at Kaufering in mid-May 1492 against the numerically superior troops of the Swabian League; In 1492 Duke Albrecht returned the occupied imperial county Abensberg and the city of Regensburg in the Treaty of Augsburg. Emperor Friedrich III. had in the meantime had his son Maximilian elected German king in 1486 . Through his marriage to Mary of Burgundy , the daughter of Charles the Bold , he came into the possession of the Netherlands and the Duchy of Burgundy and gained significantly in power. In 1500 Duke Albrecht joined the Swabian Federation himself.

Chronology of the dukes

The end of the divisions

Duke Albrecht IV of Upper Bavaria-Munich reunited old Bavaria in 1506 after the devastating War of Landshut Succession in 1504/05 . He ended the divisions by a primogeniture law . However, in 1504 the originally Bavarian offices of Kufstein , Kitzbühel and Rattenberg were lost to Tyrol. In the three named judicial districts , however, the land law of Ludwig of Bavaria continued to apply until the 19th century, so that they had a special legal position within Tyrol. The area around the Mondsee was also lost to Habsburg at that time.

The Vitztumsämter were in 1507 as part of a major administrative reform after the Landshut War of Succession in Rent offices converted who were responsible in Bavaria in addition to the tax authorities and for legal, administrative and military tasks: 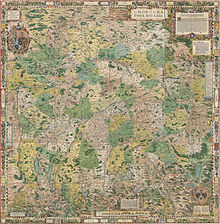 The duchy was in second place in the Reichsfürstenrat at the Reichstag , from 1623 it was represented in the electoral council. According to the register of the Reich (1521), it provided 60 soldiers on horseback and 277 on foot. It has belonged to the Bavarian Imperial Circle since it was founded in 1500 and usually provided the district bishop .

Bavaria in the age of the Counter Reformation

In old Bavaria , the Bavarian dukes prevented the Reformation from spreading . Wilhelm IV allowed himself to be won over to the cause of Catholicism by the Pope as early as 1524 by assigning sovereign rights over the Bavarian bishops and the income of the church institutes and was one of the most ardent opponents of the Reformation, which he did not allow to arise in his country. He took part on the part of Charles V Schmalkaldic war part.

However, individual territorial lords such as the Counts of Ortenburg , Neuburg and von Haag , the Duke of Palatinate-Neuburg and the Hohenwaldeck rule also introduced the Lutheran creed in Bavaria . In order to counteract the further spread in old Bavaria, the Bavarian Duke Albrecht V led a court case against the so-called Bavarian aristocratic conspiracy in 1564 . The Reformation spread rapidly in Franconia, and it found numerous supporters in eastern Swabia, especially in cities such as Augsburg, as well as in the Upper Palatinate, which was under the rule of the Protestant electors of the Palatinate . In 1571 Duke Albrecht V expelled all Lutherans from the country. From 1542 the Jesuits made the Ingolstadt State University, founded in 1472, a center of the Counter-Reformation . The Ingolstadt theologian Johannes Eck was a well-known opponent of Martin Luther .

Wilhelm V successfully participated in the war against the Archbishop of Cologne, who had become Protestant, and since then Bavarian princes have been the elector of Cologne for almost two hundred years . From 1577 the estates that were responsible for approving taxes for the duke were no longer convened regularly. This led Bavaria to the brink of financial ruin and the duke's abdication .

Wilhelm's son Maximilian I disempowered the estates by replacing them with civil servants who took over administration and finances. At the same time, he introduced a church police regiment as part of the Counter Reformation .

Bavaria's rise to the electorate in the Thirty Years' War

In 1607 the Bavarian Duke occupied the free imperial city of Donauwörth after Protestants disrupted the Catholic St. Mark's procession and incorporated it into his duchy. This was the reason for the Protestant princes and cities to unite to form a union under the leadership of the Calvinist elector and Wittelsbacher Friedrich von der Pfalz . Accordingly, the joined 1,609 Catholic forces led by Bavarian Duke Maximilian I to league together.

In 1619, the Bavarian Duke allied himself with Emperor Ferdinand II against the Protestant Bohemian estates and their chosen opposing king, the Palatinate Elector Friedrich V. In the Battle of the White Mountains near Prague , the troops of the League defeated Tilly under the leadership of the Bavarian general 1620 the Protestants. Then Tilly had the Palatinate occupied. As a thank you Maximilian I received the Palatinate electoral dignity in 1623 and the Upper Palatinate occupied by him in 1628 as war compensation. In the further course of the Thirty Years' War Bavaria was occupied and devastated by enemy troops in 1632/34 and 1648. East Swabia almost completely lost its previous political significance due to the destruction. Two thirds of the imperial county of Wiesensteig in Swabia fell through purchase to Bavaria in 1642 and one third to the princes of Fürstenberg , who also sold their share to Kurbayern in 1752.