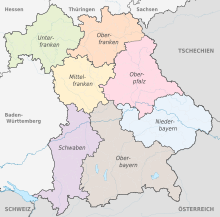 The 7 districts of Bavaria

A district is Bavaria a as the third local level above the communities furnished (first level) and circles (second level) municipal authority . The term is defined in Article 1 of the District Code for the Free State of Bavaria as follows:

"The districts are regional authorities with the right to regulate and administer supra-local matters within the framework of the law that go beyond the jurisdiction or the capabilities of the districts and independent municipalities and whose importance does not extend beyond the area of ​​the district."

In Germany, apart from Bavaria, this level also exists, for example, in the formerly Bavarian Palatinate in Rhineland-Palatinate (see under District Association Palatinate ) or in the Stuttgart region in Baden-Württemberg , in a broader sense ( Higher Municipal Association ) also in Lower Saxony and in North Rhine-Westphalia as well as in Hesse and Saxony .

District and administrative district are geographically identical in Bavaria, but legally different constructs. The terms district and district were also used historically differently in Bavaria. The precursors of today's (government) districts are the districts, the precursors of today's districts are the district offices. In 1819, after the Congress of Vienna and its follow-up treaties, the Kingdom of Bavaria consisted of eight districts, which were named after rivers based on the French model: the Isar District, the Lower Danube District, the Regen district, the Upper Main District, the Rezat District, the Lower Main District, the Upper Danube District and the Rhine District . These historical districts correspond today - largely identical in area - to the administrative districts of Upper Bavaria, Lower Bavaria, Upper Palatinate, Upper Franconia, Middle Franconia, Lower Franconia and Swabia. As a result of historical events, the Rhine District ("Rheinpfalz" or "Rheinbayern") was for the most part in today's state of Rhineland-Palatinate , and in its western parts ( Homburg ; Blieskastel ) in today's state of Saarland .

Article 7 of the district regulations for the Free State of Bavaria regulates the area of ​​a district. It consists of "[The] total area of ​​the districts and municipalities allocated to the district [...]"

According to Article 9 Paragraph 1 of the Constitution of the Free State of Bavaria , the Bavarian State is divided into districts , which are called administrative districts .

Relation to the administrative districts

The seven districts in Bavaria

The district days have been elected together with the Bavarian state parliament since 1954 . The number of district councils is currently between 16 (Upper Palatinate, Upper Franconia) and 82 (Upper Bavaria).

There is no explicit threshold clause .

See also : Results of the district elections in Bavaria

The district assembly can set up further committees.

The districts perform those tasks that go beyond the competence and capabilities of the independent cities and districts. They create public institutions that are necessary for the social, economic and cultural well-being of the population. For example, they are the carriers of psychiatric and neurological specialist hospitals, specialist clinics, technical and special schools and open-air museums. Furthermore, they are supra-local social assistance providers. In other federal states, for example, these tasks are partially carried out by the landscape associations or state welfare associations .

The Kingdom of Bavaria was divided into 15 districts in 1808, whose names were based on rivers. Their names and their territorial scope appear obsolete today: Mainkreis ( Bamberg ), Pegnitzkreis ( Nuremberg ), Rezatkreis ( Ansbach ), Nabkreis ( Amberg ), Regenkreis ( Regensburg and Straubing ), Altmühlkreis ( Eichstätt ), Oberdonaukreis ( Ulm ), Lechkreis ( Augsburg ) , Isarkreis ( Munich ), Salzachkreis ( Burghausen ), Unterdonaukreis ( Passau ), Illerkreis ( Kempten with Vorarlberg ), Innkreis ( Innsbruck ), Eisackkreis ( Brixen and Bozen ) and Etschkreis ( Trient ). In 1810 six districts (Pegnitz, Nab, Altmühl, Lech, Eisack, Etsch) were dissolved, and in 1814 another district ( Inn ). After the Congress of Vienna in 1816, the Rhine District , later Palatinate , was formed as a new district, as was the Lower Main District ( Würzburg ). By 1817, two more districts ( Iller and Salzach ) were dissolved due to the assignment of territories , so that when the administration was restructured in 1817, there were only eight districts. In 1838 these were named after the old duchies instead of the river names. The new names were later transferred to the Bavarian administrative districts that still exist today (minus the Palatinate) .

The forerunner of today's districts as a political level of representation was the General Council from 1816 to 1820, which only existed in the Rhine district . From 1820 the district administrator (not to be confused with today's political office) was created, which was also introduced in the Kingdom of Bavaria on the right bank of the Rhine from 1828 . From 1852 to 1919 there were district communities with the district administrator as the representative body. From 1919 to 1933 today's districts were referred to as districts ; the district council served as a representative body. From 1933 to 1945 the names were district association and district association day . The term used since 1946 for the third political level is the nowadays unreservedly naturalized term district or administrative district , although the constitution of the Free State of Bavaria - owing to the original tradition - still speaks of circles .