The Stuttgart region is the capital region and one of twelve spatial planning and planning regions in Baden-Württemberg . It includes the state capital Stuttgart ( city ​​district ) and the five districts Böblingen , Esslingen , Göppingen , Ludwigsburg and Rems-Murr-Kreis with a total of 179 cities and municipalities .

The Stuttgart region extends 90 kilometers from northwest to southeast and 80 kilometers from southwest to northeast over an area of ​​3,654 square kilometers. According to calculations by the Baden-Württemberg State Surveyor's Office, the geographic center of the region lies in the south of the Rems-Murr district a few hundred meters east of the Weinstadt-Strümpfelbach suburb in a vineyard. A large boulder - the so-called Vogelstein - that was set up after the vineyard reform happened to be almost exactly in the regional center.

According to data from the State Statistical Office , as of 2016.

The population figures are census results (¹) or official updates from the Baden-Württemberg State Statistical Office ( main residences only ).

Logo of the Stuttgart Region Association

Important duties of the Stuttgart Region Association include a .:

The Verband Region Stuttgart is responsible for regional spatial planning ( regional planning ). The most important instrument is the regional plan according to § 9 ROG . It shows the following central locations: 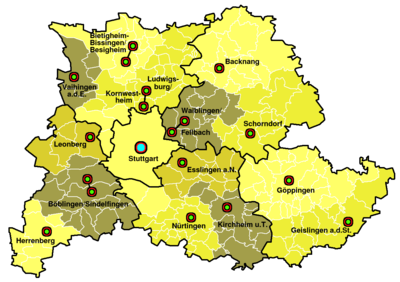 Map of the central areas in the Stuttgart region

The Verband Region Stuttgart is responsible for regional transport planning and the regionally important local public transport . In the regional traffic plan, he makes long-term forecasts of traffic development and names and evaluates urgent measures to cope with traffic. The association is the sponsor of the Stuttgart S-Bahn and a partner in the Stuttgart Transport and Tariff Association . He also participates in the financing of Stuttgart 21 .

Of around 323 million euros in the 2015 budget of the Stuttgart Region Association, 300.4 million euros are allocated to the transport budget. This includes 80.5 million euros for the operation of the S-Bahn, the Schusterbahn and the small Teckbahn.

According to a financing agreement, the VRS will receive at least 9.1% of the regionalization funds of the state for the Stuttgart S-Bahn from 2018 to 2031, i.e. 88 million euros in 2018. 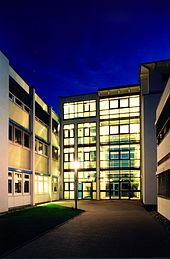 In addition to the classic economic development in the narrow sense (such as by marketing of commercial space, support of investors in site selection and location marketing ) a focus of the business development activities of the Stuttgart Region is the support of certain industries cluster . These include a .:

In order to show schoolchildren, students, graduates and young professionals the attractiveness of SMEs from the Stuttgart region as an employer, the Stuttgart Region Economic Development Corporation has set up the Stuttgart Region Employer Directory on the Internet. There companies have the opportunity to present themselves with a detailed employer profile and their current offers for junior staff.

To the knowledge transfer to improve and contacts between business and science, further 15 were in the region competence and innovation centers set up to help companies , universities and research institutions together and interdisciplinary work on industry-related projects. Examples of such competence and innovation centers are the Virtual Dimension Center (VDC, competence center for virtual reality in Fellbach ), the competence network mechatronics in Göppingen , the Packaging Excellence Center (PEC, competence center for packaging and automation technology ) in Waiblingen or the software center Böblingen / Sindelfingen .

Further activities are aimed at a. on the supply of skilled workers (e.g. by improving the compatibility of family and career and model projects for the qualification of workers ) as well as on the support of business start-ups (e.g. through the partner network for business start-ups from Stuttgart universities (PUSH) or the mediation between founders and private investors ; see also: Business Angels ). Two separate institutions have also been set up to support the region's music and film industries , which are particularly strong in the region : the Film Commission Region Stuttgart and the Region Stuttgart Pop Office .

The Stuttgart region is served by a dense network of motorways , federal and district roads. The four to six lane federal highways run in a star shape towards the state capital . There are few powerful tangential connections. The two motorways A 8 and A 81 meet in the region at the Leonberger Dreieck, one of the busiest motorway junctions in Germany. The Stuttgart Central is the hub for long-distance, regional and suburban railway traffic. Around 12 million people can be reached within a radius of 100 kilometers. The Stuttgart Airport has become a European hub for nearly 60 airlines have become. 10 million passengers use it annually, and 65,000 tons of air freight are loaded here. Flights are offered to over 120 destinations in over 40 countries. The region is connected to the domestic German and Western European waterway network through the port of Stuttgart . Freight ships with a dead weight of up to 2,800 t are loaded and unloaded here every day. In order to cope with the large number of commuters in the region and to relieve the roads, there is the offer of the Stuttgart Transport and Tariff Association (VVS). The S-Bahn network alone is 215 kilometers long and serves 83 stops .

Recreational traffic makes up the majority of the journeys made by the approximately 2.7 million inhabitants of the region. Around 800,000 people, around three quarters of the employees subject to social insurance contributions in the region, do not work in the place where they live.

In the Stuttgart region a gross domestic product of 92 billion € was generated in 2005, this corresponds to almost 30% of the added value of Baden-Württemberg , a share of 4.1% of the total German GDP, or the size of that in the EU countries Ireland or Finland. In 2009 the GDP was 101 billion euros - roughly the same as that of the EU country Hungary.

The GDP of the Stuttgart region corresponds to approx. € 35,000 per inhabitant and approx. € 64,000 per person in employment. The regional purchasing power is € 19,000 per capita. The trade tax revenue per inhabitant in 2005 was € 527. The average debt level of the municipalities per inhabitant was € 354.

In March 2005 there were 1,255,800 people in employment in the Stuttgart region, 1,029,310 of whom were employed subject to social security contributions as of June 2006. In December 2007 the number of unemployed in relation to the total civilian labor force was 58,510, which corresponds to an unemployment rate of 4.2%.

In 2004, 57.6% of employees subject to social security contributions were employed in the service sector, which accounted for € 50 billion of gross value added . The manufacturing sector accounted for € 32.7 billion, with 41.8% of the workforce employed.

Almost 24% of all employees subject to social insurance work, according to Eurostat , the statistical office of the European Union , in a high-tech industry, which is more than anywhere else in Europe . 7.1% of all employees are engineers. The regional export quota is 57.6%. Industrial companies earn far more than every second euro abroad, for comparison: the share of exports from companies in Baden-Württemberg is only 48.1% overall, and 40.1% in all of Germany. The vehicle , mechanical engineering and electrical industries are the main export sectors.

The Stuttgart region is home to over 140,000 companies, around 36,000 of which have their headquarters here. In 2006 there were 1,844 manufacturing companies with more than 20 employees. The most important industries are automotive , mechanical engineering and electrical engineering , but also financial services , IT , mass media and publishing . Not only global companies such as Daimler AG , Porsche Automobil Holding SE, Robert Bosch GmbH , IBM or Hewlett-Packard are based in the Stuttgart region, but also numerous innovative medium-sized companies, primarily from the mechanical engineering and electrical industries, but also from almost All other industries, such as the food industry , the construction industry or the engineering services sector, are represented. Many of the local medium-sized companies are world market leaders in their product area.

Also due to the large number and range of innovative medium-sized companies, as well as the high proportion of employees in the high-tech industry, nowhere in Germany are more patents registered than in the Stuttgart region.

Of the total R&D expenditure by German companies, more than one in ten euros is invested by companies in the Stuttgart region, which is one of the reasons for the long-term records in patent applications. In the Stuttgart region there are two institutes of the Max Planck Society , six of the Fraunhofer Society , four of the industrial joint research, one large research facility , eighty-eight transfer centers of the Steinbeis Foundation for Economic Development and countless research facilities at the universities and technical colleges in the region.

Every fifth place in Baden-Württemberg is provided by a university in the Stuttgart region. The Stuttgart Region is home to the technical University of Stuttgart and the University of Hohenheim with their focus on economics , agriculture and natural sciences . There is also the internationally oriented Stuttgart Institute of Management and Technology (SIMT), which offers English-language courses in the field of business . In addition, the cities of Stuttgart , Esslingen am Neckar , Göppingen , Ludwigsburg , Nürtingen and Geislingen an der Steige offer a university of education and eleven universities of applied sciences. The Stuttgart International School teaches the next generation of foreign specialists and managers. The Baden-Württemberg Cooperative State University Stuttgart emerged from the Stuttgart University of Cooperative Education , which was founded in 1974.

A selection of the regional sights:

Portal: Region Stuttgart  - Overview of Wikipedia content on the topic of Stuttgart region