This article covers the city. For the noble family of the same name, see Lords of Neuffen

Neuffen is a small town in the Esslingen district in Baden-Württemberg . It belongs to the Stuttgart region (until 1992 the Middle Neckar region ) and the peripheral zone of the European metropolitan region of Stuttgart . The city ​​has agreed an administrative partnership with the communities of Beuren and Kohlberg . The entire area of ​​the municipality is part of the Swabian Alb biosphere area and the UNESCO Swabian Alb Geopark .

Neuffen is located around 27 kilometers south of Stuttgart on the northern edge of the Swabian Alb , the so-called Albtrauf , at the foot of the Hohenneuffen . The old town of Neuffen is at 407 m, the Hohenneuffen castle ruins at 743  m above sea level. NN .

The city of Neuffen borders in the north on the municipality of Frickenhausen (Linsenhofen and Tischardt marks), in the northeast on Beuren , in the east on Erkenbrechtsweiler , in the south on Hülben and Dettingen an der Erms , in the west on the city of Metzingen and Kohlberg .

The parts of Kappishausen and Neuffen belong to Neuffen. Their area is identical to the districts of the formerly independent communities of the same name. The two parts of the city form residential districts within the meaning of the Baden-Württemberg municipal code . Kappishäuser forms a place within the meaning of the Baden-Württemberg municipal code with its own local council and mayor with the name Neuffen-Kappishäuser . The district of Kappishäuser only consists of the village of the same name. Neuffen includes the town of Neuffen, the Jushof, Wendenhof , Viehweide and Pfingstbuckel farms and the Hart and Im Hardt houses. The Hohenneuffen Castle has appeared as the living space. In the urban area are the abandoned villages Bodelsberg, Winden and Hofstetten, which, however, may be identical to the two farms of Bodelsberg and Winden.

The first Celtic settlement began around 100 BC. In the first millennium after the turn of the times, the Alemanni conquered the area. In the High Middle Ages, the area belonged to the Duchy of Swabia . Hohenneuffen Castle was built around 1100. The place that formed in the valley, like the castle, was subject to the Lords of Nifen . Due to the good contacts of the Nifens, Neuffen received city ​​rights as early as 1232 . In 1303 Liutgard von Nifen sold Neuffen to Württemberg .

From the 14th century to 1806 Neuffen was the seat of an office . With the division of Württemberg in 1442 due to the Nürtingen Treaty , Neuffen temporarily became the administrative seat of the eastern part of the country. From 1543, Hohenneuffen Castle was expanded into a state fortress. When the town fire in 1634, Neuffen was almost completely destroyed. From 1801 the castle was partially demolished. In the course of the implementation of the new administrative structure in the Kingdom of Württemberg , which was founded in 1806 , the Neuffen office was assigned to the Nürtingen Oberamt in 1807 . In 1900 a rail connection to the city was realized for the first time with the valley railway. In 1938 Neuffen came to the newly founded district of Nürtingen , with which the city was dissolved in the Esslingen district in 1973.

In August 1948, the Prime Ministers of Württemberg-Baden Reinhold Maier and South Baden Leo Wohleb as well as the Interior Minister of South Württemberg-Hohenzollern Viktor Renner held talks on the Hohenneuffen about the establishment of a new Southwest state, today's Baden-Württemberg .

The population figures are census results  (¹) or official updates from the Baden-Württemberg State Statistical Office ( main residences only ).

→ Main article of the Kappi houses

Kappishäuser was first mentioned in a document in 1396. At that time it belonged to the Counts of Achalm-Urach and then came to Württemberg, where it was incorporated into the Neuffen office. The place has the geographical location of a functional exclave . It can only be reached by road via the neighboring village of Kohlberg .

The blazon of the coat of arms reads: "In gold, three black hip horns with the mouthpiece turned to the left (heraldically) with gold fittings and black fetters."

The Protestant parish is subdivided into the Evangelical Parish Office East and West. She meets in the Gothic Martinskirche. There is also an evangelical free church. The Catholic Church is in Lichtensteinstrasse . There is also an Alevi cultural association in Neuffen.

At first the focus was on agriculture (arable farming, viticulture, fruit trees, small cattle), then the weavers, later the textile industry, today the metal industry dominates. One of the highest vineyards in Germany is located on the slopes below the Hohenneuffen ruins . The large Hohenneuffen site, which includes the Neuffen sites as well as those in Beuren , Linsenhofen , Kohlberg , Kappishäuser , Metzingen and Weilheim an der Teck , is part of the Remstal-Stuttgart area. Neuffen is the seat of the Hohenneuffen-Teck wine growers' cooperative.

The valley railway to Nürtingen connects with the national rail network. In the summer half of the year, a museum railway run by the Society for the Preservation of Rail Vehicles is carried out on the route . The state road L 1250 leads from Neuffen to Linsenhofen and Hülben .

The waste management company of the Esslingen district is responsible for waste disposal. There are separate collections for organic waste , household waste and paper.

The offer includes the sports area Spadelsberg, the outdoor swimming pool Neuffen, the municipal sports hall and the sports hall of the Gymnastics Association Neuffen. In addition, the Turnerbund operates a ski lift in winter when there is enough snow. Neuffen is located directly below the Swabian-Alb-Nordrand-Weg HW1 (long-distance hiking trail). 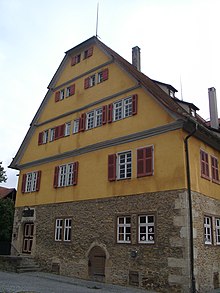 Neuffen is on the Württemberg Wine Route . From the townscape- defining Hohenneuffen , the second largest fortress ruin in Baden-Württemberg, one has a view of the small town of Neuffen, its valley head, the Albrand and the Voralb landscape. The Neuffener Heide nature reserve is known for its orchid blooms. One of the destinations of the hiking trails from Metzingen via Jusi , Sattelbogen, Hörnle and Barnberg to Hohenneuffen is the Barnberg Cave .

In addition to the city museum in the Great House, there is also a religious order museum.

The former mayor Kurt Schmid has been an honorary citizen of Neuffen since 1986.

Personalities who live, have lived or worked in Neuffen

Wikisource: Neuffen  - in the description of the Oberamt Nürtingen from 1848

Cities and municipalities in the Esslingen district