from Wikipedia, the free encyclopedia
This is the spotted version , flagged on June 6, 2020 . There are 3 pending changes that have yet to be viewed. 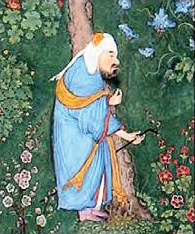 Representation of the Iblis in a Schahname edition 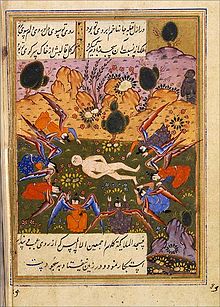 Iblis (above right) refuses to prostrate himself, illustration from a Persian manuscript from the 16th century

Iblis (Persian and Arabic إبليس, DMG Iblīs ; German: ' Enttäuscher ', 'der Enttäuschte ', 'Teufel'; as a form of contraction, presumably derived from the Greek  Διάβολος diábolos : '' chaos ', 'devil') - in Islamic tradition also Azazil ( Arabic عزازل, DMG ʿAzāzil ) - is a figure comparable to the devil in Islam and in Iranian mythology . In contrast to the Christian understanding of Satan, as an opponent (of the monotheistic) God , Iblis in Islam only takes on the role of the enemy of humans (and jinns ). In Iranian mythology, Iblis is considered the head of the Diw . The terms Satan and Iblis are mostly interchangeable in Islam. In a symbolic interpretation, Iblis stands for someone who worships God, but does not honor people as his creatures.

Iblis in the Koran

In the Qur'an Iblis is as a being made of fire who resided in heaven until it refused to prostrate itself to Adam, although God had commanded it. Iblis is named 11 times, almost exclusively in connection with the prostration to Adam , which he refuses. The other times in connection with the fact that the unbelievers follow him ( Sura 26 : 95) and that he confirms the arrogance of the unbelievers ( Sura 34 : 20). When God said he would create a successor on earth, spoke the angel : "? Do you want to you someone use that will make mischief therein and shed blood, when we but praise and your praise praise your glory" ( Sura 2 : 30 ). God told the angels that he knew something the angels did not and commanded those present to prostrate themselves before Adam. Seeing man as inferior, Iblis refused and asked God for a time limit to prove that people are unworthy by misleading them: “O my Lord, give me a time limit until the day on which they are to be raised. God said: So the time will be granted to you until the day of a predetermined time ” ( Sura 38 : 80). So he became Satan , who moves people to act badly and unjustly.

There are different views in Islam regarding who Iblis belongs to. Decisive criteria of his assignment are his stay in heaven, the command addressed to the angels, his creation from fire, and the mention of the word 'Jinn' in Sura 18:50. Even if many contemporary proponents, especially among proponents of Salafist interpretations, insist on the infallibility of angels, the idea of ​​a possible fallibility of angels was widespread in classical Islam. Depending on the type of reading, interpretation and tradition, different views have been established among Islamic scholars regarding his affiliation, which can be summarized roughly in the following interpretations: 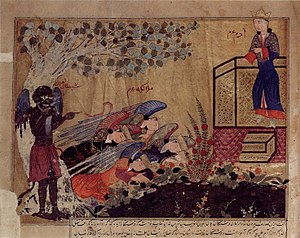 Depiction of Iblis from the annals of al-Tabari

Islamic legends tell of the rise of Iblis, which should ultimately lead to his fall. According to this, a multitude of demons lived on earth before the creation of humans. These were ruled by King Jann for thousands of years . The name comes from the Koran and is also considered the progenitor of the demon race in Islamic exegesis. The pyramids of Giza are also considered to be remains from the reign of the Jann. When Dschann angered the sky, Iblis overthrew it on behalf of God. He is supported in this by the Diw among the demons. From then on Iblis ruled over the earthly world and increased his arrogance, which caused his own fall when he refused the command to bow to the newly created Adam. The demons most loyal to him were thrown with him into hell , where he resides at the deepest point, bound in iron chains. From there he commanded his hosts. However, with God's permission, he could come to the surface himself.

Iblis' refusal to bow to Adam plays a special role in Sufism . According to some Islamic mystics such as Hallaj , Attar and Ghazali , Iblis is a strict monotheist who, defying threatening punishment, refuses the order to bow to anything other than God. Other mystics such as Rumi , on the other hand, describe Iblis less praiseworthy; as the only lost angel. A frequent motif in Sufism understands Iblis' fall symbolically as a way to the unity of God. Since Iblis was the only angel who refused to bow before Adam, Adam showed his highest loyalty. He willingly accepted his exile in hell and thus becomes an example of selfless devotion to God. The positive interpretation of the refusal to obey God's command, however, struck most Muslims with dismay. But according to that Sufi tradition, the unity of God can only be achieved when every dualistic thought is abolished and only God is recognized as absolute truth. Before his fall, Iblis had only worshiped himself for love, God. In his exile, however, his prayers are selfless and show the sincerity of his love. According to one story, Iblis even claims to be a better monotheist than Moses , since Moses turns to Mount Sinai when he hears from God, but Iblis can see God's presence as omnipresent through his love. When Moses replied that God had punished him by changing his figure from that of an angel to that of a Satan (al-mala ikiyati ila s-saytaniyati) , Iblis replied that his condition was only temporary. This would change again, but his love for God would now last forever.

Rumi's interpretation, on the other hand, is in line with the orthodox interpretation of Iblis and describes him as a one-eyed angel who can only see half the truth with a blind eye and also as the embodiment of the sins of envy and pride. He would have recognized true love for God, but he lacked love for his creatures, which is why he did not bow to Adam and God made him Satan. Thus, Iblis is also a symbol for the separations in the universe for love and unity of God. The task of the Iblis as the devil is therefore necessary in Sufi mysticism because an illusion of duality (not seen in Islam despite the splitting off of the Iblis) must first arise in order to strive for the unity of God.

Annemarie Schimmel writes in Mystical Dimensions of Islam : “In certain mystical circles one tried a kind of rehabilitation of Satan . Apparently this thought was first formulated by Hallādsch : Satan boasted that he had served God thousands of years before Adam was made, and his pride in being made of fire made him disobey the command to prostrate himself before the dust-made Adam. Hallaj recognized only two true monotheists, namely Muhammad and Satan; but while Muhammad is the treasurer of divine grace, Iblis becomes the treasurer of divine wrath "(p. 276 f.)

In Jesidentum is Melek Taus honored as vicegerent of God on earth who should, bow similar to Iblis, before the newly created humans. He refused because it was God's first commandment that one should only worship God. Because of his loyalty, God made him his representative on earth. Because of the parallels between an angel's refusal to bow to a person, Melek Taus was often associated with Iblis or the devil . The positive evaluation of the Yazidis by that angel earned them the attribution of devil worshipers among Muslims and Christians . Another parallel to Iblis can be found in a story within Yezidism in which Asazel wanted to separate from God and got hell as his own kingdom, but there regretted his decision and extinguished the flames of hell with his tears, whereupon he went to the Heaven returned. This was incorrectly identified in a translation of Yezidi works with Melek Taus and thus promoted the erroneous identification between the figure of Satan and Melek Taus.