The pyramids of Giza in Egypt are among the most famous and oldest preserved structures known to man. They stand on the western edge of the Nile Valley , about eight kilometers southwest of the city of Giza (Gîza). They are around 15 km from Cairo city ​​center and are the only preserved of the seven wonders of the ancient world . They have been part of the world cultural heritage since 1979 . 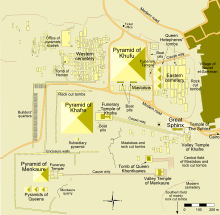 West view of the pyramids, in the background the Nile valley in the haze

The pyramid field of Giza has been an important cemetery since the 1st Dynasty . Great mastabas of the 1st, 2nd and 3rd dynasties were excavated here. It is unclear to what extent such ancient graves were destroyed by the later cemetery and pyramids of the fourth dynasty.

Construction of the pyramids

The pyramids of Giza were built between about 2620 and 2500 BC. In the 4th dynasty . They were erected on a 1000 by 2000 m limestone plateau , with the construction of the pyramids creating secondary pyramids, temples, burial grounds and workers' villages. It is noteworthy that no wheeled carts were used in the construction of the pyramids, although the Egyptians probably already knew the wheel at that time. Differences in height during construction were possibly overcome by pulling the loads on inclined planes.

The largest and probably best-known pyramid is that of Pharaoh Cheops . He ruled around 2620 to 2580 (according to another source around 2604 to 2581) BC. The Cheops pyramid was originally 146.6 m high (today: 138.75 m), the sides are on average 230.3 m long and the setback of the outer cladding is 22 fingers (in the vertical) to a cubit (in the horizontal); this corresponds to an inclination angle of 51 ° 50'40 ". It was built from around 3 million stone blocks, each weighing an average of 2.5 t, and was completely clad with limestone blocks. Inside is the Great Gallery , the 8, It is 5 m high and 47 m long. The construction of the pyramid was directed by the builder Hemiunu . At the end of the gallery is the royal burial chamber, which contains the remains of a granite sarcophagus. There is also the so-called queen chamber and the first underground burial chamber East side of the pyramid are the remains of the mortuary temple and the access road. The valley temple is buried under the modern city. To the southeast of the mortuary temple are the pyramids for the queens Hetepheres I , Meritites I and Henutsen . In the solar barque museum on the south side of the Cheops Pyramid is one of the solar barges that were excavated and reassembled in 1954. There are three smaller queen peaks in the pyramid complex yramids and a cult pyramid . 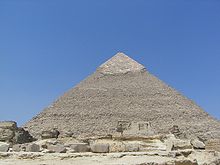 The middle of the three pyramids is that of Pharaoh Chephren . He ruled from around 2558 to 2532 BC. The Chephren pyramid was originally 143.5 m high (today: 136.4 m), the side length was 215.25 m and its setback is 21 fingers to a cubit; the angle of inclination is thus 53 ° 00'10 ". Like the Cheops pyramid, it was completely clad with limestone slabs. Due to its location about 10 m higher, it appears even larger than the Cheops pyramid because of its only slightly smaller size and height. and its tip protrudes beyond the top, which is why laypeople often mistake it for the Great Pyramid. A 400 m long, relief-decorated path leads from the valley temple past the Sphinx temple and the great Sphinx of Giza to the mortuary temple and the pyramid itself The valley temple is 45 mx 45 m in size and 18 m high. The recesses in the alabaster floor indicate the location of 23 larger-than-life figures of the pharaoh. South of the pyramid are the remains of a small cult pyramid.

The 73 m long sculpture of the Sphinx north of the valley temple and the path of Chephren was carved out of the rock. The head of the Sphinx is covered by a Nemes headscarf with a Uraeus snake on the forehead. The dream stele of Thutmose IV stands between the front paws .

The smallest of the three pyramids is that of Pharaoh Mykerinos . He ruled from around 2532 to 2503 BC. The Mykerinos pyramid was originally 65 m high, which makes it not even half as high as the other two pyramids. The sides are 102.2 m × 104.6 m long (mean base length 103.4 m), and their setback is 22 fingers to a cubit, which corresponds to an angle of inclination of 51 ° 50 ', with that of the Great Pyramid of Cheops is almost identical. The upper part of the pyramid was - like the Cheops pyramid and the Chephren pyramid - clad with limestone slabs. The lower 16 layers, however, consist of rose granite edging . The associated valley and mortuary temples are no longer completely preserved. In the Cairo Museum , the groups of statues of Mykerinos found in the valley temple are exhibited today. On the south side there are three queen pyramids, two of which were designed as step pyramids .

→ Main article : Tomb of the Chentkaus I.

Panorama of the pyramid plateau

Southeast of the Chephren pyramid standing next to the great Sphinx which is also referred to as the "fourth pyramid of Giza" grave of the ruling at the end of the 4th Dynasty queen Chentkaus I. This first in 1932 explored grave has the character of a two-step pyramid and was originally built for a unfinished pyramid held. The 45.8 mx 45.5 m measuring first step consists of a rock block that was left in the local quarries, on which the masonry, mastaba-like second step rises . Like the great pyramids, the structure was clad with limestone and reached a height of 17 m. At this grave building there was a settlement for the priesthood and a ship grave, with which it was equipped with the attributes of a full ruler's grave.

After the 4th dynasty

Giza was an important cemetery in the Old Kingdom and was probably only given up at the beginning of the First Intermediate Period . Few remains from the Middle Kingdom have survived, and it is striking that there was hardly any evidence of a cult of the dead on the pyramids from this period. Only from the time of the New Kingdom and the late period , on the other hand, are there important tombs again in Giza. There is evidence of restoration work on the temples and pyramids.

Scientific research into the pyramids began with Napoleon's Egyptian campaign from 1798 to 1799. It influenced the European style of the Empire .

Excavations took place in 1860 under the direction of Auguste Mariette .

In 1979 the pyramids and the Sphinx of Giza were added to the UNESCO World Heritage List as cultural monuments .

2007, built in 2002 Wall was around the pyramids areal temporarily closed. The revenue generated by the tour admission will go to the Egyptian government. Locals who have been able to earn a living there for generations are severely restricted in their work.

In early June 2012, the Giza supervisory authority had a state-of-the-art pumping system installed to pump out groundwater under the Sphinx. For some time now, the Sphinx and the valley temples in particular have been endangered by a rising water table. The reason for this is a newly installed sewage system in the neighboring town of Nazlet Al-Seman and a new irrigation system in the area of ​​Hadae Al-Ahram. Ecologists and hydrologists warn that the large amount of pumped water lowers the surface and increases the risk of erosion . This could collapse the Sphinx and the Pyramids of Giza. Ali El-Asfar, director of the Giza Plateau, contradicts this. The pumps would be turned off at a groundwater height of 4.5 meters below the surface. At this height, the monuments would be absolutely safe, as this condition was already to be found in ancient times.