The slope of a linear function corresponds to the quotient

In mathematics , especially in analysis , the slope (also known as slope ) is a measure of the steepness of a straight line or a curve .

Slope of a straight line

Slope of a straight line

The slope of a straight line is often denoted by the letter . If Cartesian coordinates are used , the straight line defined by two points and has the slope

For example, the slope through the points and results:

It does not matter from which points of the straight line the coordinates are used in the formula. For example , if you take and , you get:

If the straight line has the slope and it intersects the y-axis at the point , then it has the equation

Note: The straight lines parallel to the y-axis are not function graphs and therefore do not have a slope value . You can assign them the slope “infinite” (∞). 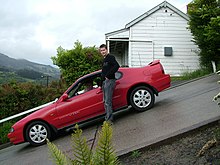 The steepest street in the world with around 35% (19.3 °) is Baldwin Street in New Zealand.

The gradient of a straight line also plays a role in road traffic . The traffic sign for the uphill or downhill gradient of a street is based on the same term for the gradient, but it is usually expressed as a percentage. A specification of 12% gradient means, for example, that the height increases by 12 m for every 100 m in the horizontal direction. According to the definition given above, one has to divide 12 m by 100 m, which leads to the result 0.12 (in percent notation 12%).

A connection from trigonometry says that in a right-angled triangle the tangent of one of the two acute angles is equal to the quotient of the respective opposite and adjacent cathetus, which makes it clear that the slope is also the tangent of the slope angle (in degrees) compared to the positive one -Axis is:

For larger angles of inclination, on the other hand, or if their size is to be determined exactly, the inverse function of the tangent is required, i.e. the arctangent function :

In the example above one calculates:

In the case of negative gradients, it should be noted that - due to the point symmetry of the arctangent function - the gradient angles then also become negative.

The term slope also provides a convenient method to determine the intersection angle of two straight lines with given slopes and :

In the case of metric threads , the pitch characterizes the pitch , i.e. the distance between two thread steps along the thread axis, in other words the axial path that is covered by one revolution of the thread.

In the case of imperial threads, on the other hand, the number of thread turns over the distance of one inch is specified as the value. The abbreviation TPI ("threads per inch") is often used as a pseudo unit .

Gradients in waters, in potential-driven processes and currents

In particular at hydropower plants , the local water level difference between the upstream and downstream water is referred to as the gradient (or working height). This applies to mills, run-of-river power stations, but also to constructions with tunnels, water locks and pressure pipes. The decrease in the water level between 2 distant points along a river is also referred to as a gradient.

In thermal power processes , for example on heat engines or refrigeration units, we speak of pressure and temperature gradients when there are discrete differences between the corresponding measured variables between 2 areas that lead to self-running flows of fluids (gas, liquid) or thermal energy.

Static pressure gradients can also exist between different points of supply systems for compressed air or tap water , as well as in ventilation systems (important for hygiene, clean rooms, odor nuisance). (A pressure drop occurs dynamically along a flow path.)

In a figurative sense, similarly in economics and sociology, differences in wage levels , price levels or education , e.g. regionally between town and country, socially between men and women, are referred to as wage gaps, price gaps, educational gaps.

Generalization: slope of a curve

One of the fundamental problems of analysis is to find the slope of a curve at a given point on the curve. The formula discussed above can no longer be used since only one point is given. If you choose the second point arbitrarily, you will not get a clear result or, if both points are chosen identically, the result is not defined because it is divided by 0.

The slope of the graph of a function at a point on the graph is therefore defined as the slope of the curve tangent at this point. The differential calculation provides the concept of derivation as an aid to be able to calculate such slope values.

Example: For the graph of the function , the slope at the curve point and the associated angle of inclination are to be calculated.

First, one finds the equation of the derivative function :

Now the x-coordinate of the given point is inserted:

The angle of inclination results from the value of the slope: