Annual rates of change in prices in Germany since 1965 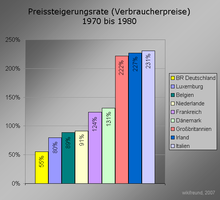 The price level ( ) is an economic key figure that indicates how many monetary units have to be paid for in an economy for the prices of certain goods and services in a shopping basket .

The economics focuses on comparison and analysis purposes with various statistical data , in the form of curves are combined for a certain period at a fixed data series. This level set includes, among other things, the price level, with which, in particular, price level stability is measured, the domestic production level , the exchange rate level or the interest rate level , which can be visualized using interest curves .

The changes caused by prices are the reason why a distinction is made in economics and tax law between nominal value and real value . The money retains its printed face value, but with inflation its real value decreases.

It shows the efficiency of an economy , whereby a lower relative price level means higher efficiency, since in this case less work has to be done for the same goods and services.

In economic theory, the expected price level is one of the influencing variables on the level of the nominal wage (w). This is justified by the fact that future prices are viewed by the collective bargaining parties as an important factor influencing the purchasing power of future wages and are therefore taken into account in collective bargaining . The wage setting function is:

Now if workers expect prices to rise, they will demand a wage increase. For example, if employers expect their payable prices to double, they will be willing to double their nominal wages. In this case, the real wage (w / p) would remain constant, as both factors change in the same way. This means a positive connection between the expected price level and the nominal wage.

Consideration of the expected price level in the AS-AD model

The expected price level is an important component in the AS-AD model .

The aggregated supply shows the extent to which changes in production affect the price level. The aggregate supply curve describes a mechanism by which prices and wages adjust over time; H. rise or fall. 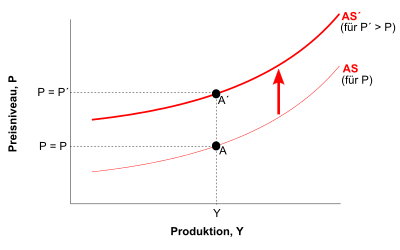 The aggregated supply curve (AS curve)

Basically one can say that in the short term the price level usually corresponds to the price expectation. In the medium term, however, p e will adjust to p.

The AS function says that p is positively dependent on p e and the production level (Y) (assuming short and medium-term constancy of the other variables). So if a higher price level is expected, the actual one adjusts in the same proportion. If a price increase is expected, then the wages adjust positively. If a nominal wage increase takes place in order to achieve the desired real wage, then this increases the costs for the company. The companies will then pass on the increased costs to the prices, which in turn leads to an increase in the price level.

The AS-AD equilibrium is dependent on p e , it determines the position of the aggregated supply curve - if the expected price level increases, the AS curve shifts upwards and vice versa. The equilibrium point A, where Y = Y n and p = p e , shifts analogously.

As long as production is above its natural level, the price level exceeds what is expected. Over time, however, this process will adjust again. Then if Y> Y n , the price expectation will increase and the people involved in the wage setting will adjust the nominal wage accordingly positively. With the increased costs for companies, they will also increase their prices for their goods and services. The real money supply is falling. Now interest rates will rise and production will have to be reduced until production levels return to their natural level. Now Y = Y n then p = p e .

In connection with inflation , expected inflation and unemployment, the price-wage setting equation is used and exchanged for a term. From the wage setting formula we replace F (u, z) and assume the following relationship:

That means, for example: the wage will be higher, the lower the unemployment rate u is.

The result is the equation:

It is also conceivable that the expected price level p e adapts to p, the actual price level, as described in the following equation.

The consequence of this would be that the AS curve would run horizontally in the short term and not increase slightly as in the previous approach. However, this is not a substantial difference.

The general price level is the simple or weighted arithmetic mean of all prices in an economy, so that the resulting amount of data makes its measurement seem insoluble. A measured variable that is as representative as possible must therefore be used. The price level is therefore measured using a shopping basket using a price index . The decisive criterion for the choice of a certain price index is its suitability as a measure of the general price level, whereby no price index is regarded as indisputable as an indicator of the price level. The price index for the cost of living ( Laspeyres index ) and the price index for the national product ( Paasche index ) have emerged, which differ both in terms of the economic sectors covered and in terms of their method of calculation.