Under money supply is defined as the entire money was an economy that is in hands of non-banks located. The money supply through monetary creation in the context of lending by commercial banks increased and by the repayment reduced from loans. A certain amount of money is therefore always offset by corresponding liabilities in the same amount.

The money supply of the non-banks is used to measure the money supply, i.e. that is in the hands of private households , companies (without credit institutions ), the state and abroad (without foreign banks ) . Economics and central banks measure the amount of money by means of monetary aggregates , which are denoted by (for English money ) and a number. The monetary aggregate is a subset of and the latter a subset of . A lower number means that the money supply under consideration is closer to immediate real economic transactions , i.e. H. the smaller the number, the more important is the function of money as a means of payment .

The delimitation of the individual aggregates is conventional and not uniform internationally. The monetary base (also monetary base ) occupies a special position. It is equal to the sum of the currency in circulation and the central bank money holdings of the credit institutions ( excess reserves plus minimum reserves ). except for the cash portion of non-banks, is not a subset of or higher, since central bank reserves are only used as means of payment between commercial banks. The monetary base is also in no fixed relation to the amounts up to . 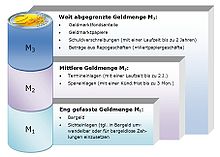 Definitions of the Swiss National Bank :

Definitions of the Deutsche Bundesbank : 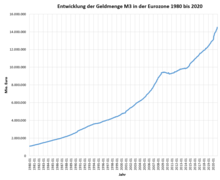 The money supply is also essential for determining the growth opportunities and inflation risks of the economy. If too little money is in circulation (“ money gap ”), this has a dampening effect on economic growth and inflation and vice versa.

In contrast, the amount of central bank money in the market (also called liquidity), which u. a. used for the processing of transactions between central banks and commercial banks as well as commercial banks among themselves, although it has an impact on the general level of interest rates, it only has an indirect impact on money supply growth and real economic variables.