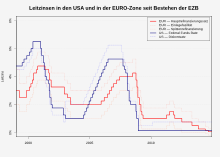 Key interest rates of the Federal Reserve System (in blue) and the European Central Bank (in red) from 1999 to 2015: low interest rate policy from 2008

Low interest rate policy , also colloquially known as “cheap money policy”, is the entirety of the monetary policy measures of a central bank , which are intended to lower the general level of interest rates (market rates) in a currency area to a low level or to keep them there. The most important financial instrument for this is the key interest rate , the lowering of which enables the central bank to enable commercial banks to agree lower interest rates on their loans to companies and households. This type of lowering of the cost of capital is intended to stimulate investments and thus the economy of an economy.

The purchase of government bonds or private securities ( quantitative easing ) provides a central bank with another instrument for lowering interest rates ; Helicopter money has been discussed as an additional instrument since 2015 . Since the interest rates on government bonds fall, the public sector can finance its budget deficits more cheaply . At the expense of the central bank balance sheet , national debt is becoming “more bearable”, as a result of which measures in the area of restrictive fiscal policy are abandoned or an expansionary fiscal policy is facilitated.

A particularly extreme example of such a course is shown by Japan's monetary policy since the early 1990s or since 2013 ( Abenomics ). Since the financial crisis in 2007 , the European Central Bank has also been on this course of expansionary monetary policy via securities purchase programs , as is the US Federal Reserve System at the moment. In 2016, the low interest rate policy with interest rates little over, at or even below zero was still considered “unconventional”.

A sustained low interest rate policy also entails risks for a financial system : With the lowering of the general interest rate level, investors only achieve a low return on their saved capital ( savings deposits , time deposits ), often with an interest gain below the inflation rate . In extreme cases, there is even a burden in the form of a so-called negative interest rate . Due to the low interest rate policy, the value storage function of money is reduced . In this context, other asset classes take on this function of storing value, i.e. assets such as real estate (“ concrete gold ”), stocks and precious metals , especially gold . In conjunction with inflation, negative, zero and low interest rates result in a “ financial repression ” of savings and time deposits that are traditionally held by members of lower income groups with little financial knowledge, especially for the purposes of retirement provision . Investors therefore increasingly prefer an asset allocation to assets such as real estate, stocks and precious metals such as gold as an investment . As a result, the market value of the assets can significantly exceed the intrinsic value . Speculative bubbles , such as real estate bubbles , can occur or become stronger. Decline due to the reduction in the general level of interest rates, the returns from savings deposits, time deposits and life insurance , can business models appropriate financial companies are themselves at risk, may these companies. In addition, there is a risk that states and other regional authorities, institutions and corporations under public law, companies and private households will become over - indebted in a low-interest environment . Loan- financed statism is promoted. Another danger of a low interest rate environment is that riskier investment strategies will be pursued as a result of the easier lending process (“search for yield”). Money flows into risky and more often unprofitable projects and companies (“ zombie companies ”). In this way, non-performing loans and the requirement for provisions are increasing , as is the tendency to securitize the loans in toxic financial products . In other words: the credit risk increases , capital is misallocated , the subprime market grows, “ zombie banks ” arise , a contagion effect occurs. These risks can lead to banking and financial crises as well as currency and sovereign debt crises up to national bankruptcy .

Within the Eurosystem , monetary policy that uses the means of purchasing government and corporate bonds ( Eurosystem securities purchase programs ) leads to increased TARGET2 balances, which would have to be settled in the event of a country leaving the Eurosystem. Insofar, default risks arise that can also have an indirect impact on the budgets of other member states.

According to John Maynard Keynes , an expansionary monetary policy loses its investment-stimulating and stimulating effect if individuals prefer to keep the money in their coffers. According to his liquidity preference theory, such a situation occurs when individuals do not consider investing their money to be worthwhile due to low market interest rates and returns and they prefer to wait for better investment opportunities in the future ( liquidity trap ).

According to the monetary overinvestment theory, lowering the interest rate through monetary policy measures leads to artificial boom phases, which in turn lead to sharp economic downturns.

Supporters of the piggy bank theory such as Carl Christian von Weizsäcker , Ben Bernanke and Philip R. Lane assume, in accordance with the loanable funds theory , that the main cause of low interest rates is the savings glut , i.e. an oversupply of saved capital. Critics of this real economic approach point in particular to the empirical finding, incompatible with the piggy bank theory, of the decline in gross and net savings rates since the 1980s with a simultaneous decline in real interest rates.

Economist Ulrich van Suntum considers the creation of money (“money glut”) practiced in a low interest rate environment to be a system in which low interest rates and ultimately unsustainable national debt build up each other until the entire system collapses. The higher the national debt, the more difficult it becomes to return to "normal" market rates. Other experts, including those responsible at the Bank for International Settlements , fear that persistently low key interest rates would make it more difficult to reverse the expansionary monetary policy or that the low interest rate policy will become more and more a one-way street.

Reception of the low interest rate policy in the euro zone

In a legal opinion, which was presented in Berlin on October 1, 2019, the Hamburg legal scholar Kai-Oliver Knops comes to the opinion that the negative interest rates charged by the European Central Bank since June 11, 2014 are unlawful. Under European law, the European Central Bank is neither formally nor materially authorized to collect them. Sufficient justification and parliamentary participation are lacking for such far-reaching measures. Knops assesses the negative interest as charges that violate the subsidiarity principle (Art. 5 Para. 3 TEU) and, in accordance with the case law of the European Court of Justice, also do not respect the proportionality principle (Art. 5 para. 4 TEU).