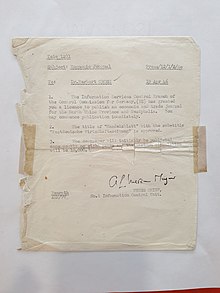 Photo of the original license for the publication of a business newspaper, which the journalist Herbert Gross applied for from the British military authorities in the spring of 1946.

In the spring of 1946, the journalist Herbert Gross applied to the British military authorities for a license to publish a business newspaper. He received this with the condition that the newspaper remains free of National Socialist ideas and advocates democracy and a peaceful interplay of work and capital. Since there was a lack of paper, only 10,000 copies with no more than eight pages were allowed to be printed per week. The publication of advertisements was not allowed.

The first edition of the Handelsblatt appeared on May 16, 1946. After the paper allotments improved in 1947, advertisements could be published and the circulation increased.

The Gross era ended after a few months. Gross remained connected to the paper as a freelance author. The new licensee was the founding editor-in-chief of Handelsblatt, Friedrich Vogel . The second licensee was the auditor Erich Potthoff. Potthoff regularly wrote a column in the newspaper, and he was also instrumental in founding the magazine Der Betrieb , the first issue of which appeared in January 1948. In 1949 Potthoff left the publishing house. Since in 1949 the license requirement, censorship and other requirements were no longer applicable, Vogel was now the sole owner of the newspaper.

In 1969 Friedrich Vogel, now 67 years old and without descendants, initially accepted Georg von Holtzbrinck as a minority shareholder. A new era began with von Holtzbrinck as a partner. The first step: in 1970 the competitor Industriekurier was taken over. Klaus Bernhardt advanced to long-time editor-in-chief.

1983 brought considerable changes for the publisher: A new publishing house in the Düsseldorfer Kasernenstrasse was moved. At the same time, the newspaper changed its face, its format and the place of printing. After the first big increase in circulation within five years from 44,000 to 78,000, which was followed by the merger with the "Industriekurier", the circulation has now grown - also within five years - from almost 85,000 to over 120,000 copies.

The first "Handelsblatt" appeared on May 16, 1946 with the headline "Regulation of the consumer goods cycle".

In 1994 and 1997 the design of the Handelsblatt was thoroughly revised, the financial newspaper was expanded considerably and new topics were dealt with on special pages (for example, "Company Sport"). After the competitor Financial Times Deutschland was announced for 1999, the editorial team and correspondent network were strengthened. In addition, the content of the newspaper was further expanded, with an outwardly more colorful and modern look.

For many years the editor-in-chief of the Handelsblatt was the tax and labor lawyer Hans Mundorf. This was followed by Thomas Knipp (2002–2004) and Bernd Ziesemer (2002–2010). Ziesemer left the newspaper in the second half of 2010; Gabor Steingart , previously editor of the news magazine Der Spiegel , most recently as a correspondent in Washington, DC , became the new editor-in-chief on April 1, 2010. Steingart was appointed to the three-person management of the Handelsblatt Media Group in October 2012 (starting January 1, 2013). He was followed by Hans-Jürgen Jakobs as editor -in- chief on January 1, 2013. Since the beginning of 2015, Jakobs has shared the post with Sven Afhüppe , who has been the newspaper's sole editor-in-chief since January 1, 2016.

In 2018, the former editor-in-chief and then publisher of Handelsblatt Gabor Steingart was suddenly dismissed. His departure sparked a public discussion. In an article from February 7, 2018, Steingart called the power struggle at the top of the SPD a “perfect murder” by party chairman Martin Schulz against Foreign Minister Sigmar Gabriel . The publisher von Holtzbrinck stated that he and Steingart had “differences in key corporate law issues” and “in individual cases - different assessments of journalistic standards”. According to Spiegel , the dismissal involved different strategic plans for the Handelsblatt Media Group. Steingart demanded huge investments and is said to have encouraged the sale of specialist magazines. He also criticized the supervisory board for being incorrectly put together and not digitally savvy. The manager magazin wrote that Steingart's failed projects like the Handelsblatt Global Edition led to losses of a good 15 million euros - especially Holtzbrinck's supervisory board chairman Grabner no longer wanted to accept that. In addition, Steingart tore down the usual boundaries between the editorial team and the publisher with its extremely extensive advertising business.

In September 2014, the Handelsblatt Global Edition was launched, a paid English-language digital edition of the newspaper. At the end of 2018 it was converted into the free Handelsblatt Today, which was discontinued at the end of February 2019.

In October 2014, the Handelsblatt came with the Handelsblatt Magazin as a supplement for the first time. The magazine appears several times a year and highlights "the beautiful and personal sides of business". Editor-in-chief is Thomas Tuma .

The Handelsblatt Media Group is divided into three journalistic business areas: print, digital and live events. The Media Group also awards numerous prizes, including the German Business Book Prize, which has been awarded since 2007, for the best business book of the year. Other prizes include the “Hall of Fame for Family Businesses”.

From the mid-1990s, starting with Handelsblatt and Wirtschaftswoche , numerous objects belonging to the Handelsblatt Media Group and their information offer went online. The digital activities have been expanded over the years and formed the second important business area alongside print.

From 2011 to 2015 Oliver Stock was editor-in-chief of the online presence Handelsblatt Online (www.handelsblatt.com), replacing Sven Scheffler.

As part of the editorial reform, Handelsblatt Online was merged with the print editorial team in 2015. The newly created editorial team is organized in four departments (company, business & politics, finance and agenda) and works for all technical platforms. Oliver Stock was appointed to the chief editor. In 2017 he left the Handelsblatt Media Group.

Handelsblatt Online initially relied on a freemium model, in which the website content was available free of charge or partially behind the paywall. In May 2018, the Handelsblatt introduced a new paid content strategy. All texts, videos, research tools and infographics were chargeable.

The Handelsblatt , like most German newspapers in recent years to rest lost. After the launch of the rival paper Financial Times Deutschland , which was discontinued at the end of 2012, in 2000, the sold circulation fell by around 15 percent, but was able to maintain this level until 2012. It is currently 120,005 copies. The circulation sold has fallen by an average of 0.3% per year over the past 10 years. In contrast, it rose by 4.7% last year. The share of subscriptions in the circulation sold is 71.3 percent.