This article covers the general meaning of the term; for the national newspaper taz see Die Tageszeitung .

Some developments u. are presented without reference to credible statistics, possibly a few generalities. - Chricho ¹ 15:53, Feb. 27, 2011 (CET)

As a forerunner of the daily newspaper, in ancient Rome the consul Gaius Julius Caesar 59 BC. Chr. Introduced until at least 235 n. Chr. Probably not always appeared daily news bulletins Acta diurna apply.

The first modern newspaper appeared on July 1, 1650 in Leipzig : Two years after the end of the Thirty Years' War, the Leipzig printer and bookseller Timotheus Ritzsch converted his weekly newspaper, which had been published four times a week since 1643, into a daily newspaper. The new Incoming Newspapers appeared six times a week from 1650 onwards. Each issue consisted of four pages measuring approximately 13.5 by 17 centimeters. The edition was about 200 copies. The incoming newspapers were set in metal letters and printed by hand on a wooden printing press .

Tasks and characteristics of a daily newspaper

Four features characterize a newspaper: 1. Publicity, that is, the general accessibility of the publication . 2. The topicality , the publication of the message should be as close as possible to the associated event. 3. The newspaper must appear regularly ( periodicity ). 4. the universality, the editorial and thus the content diversity of the newspaper. A daily newspaper must appear at least four times a week, otherwise it is referred to as a weekly newspaper .

A daily newspaper has the task of informing the population, commenting on the events and analyzing them. It is therefore very important for the daily dissemination of information and thus also for the formation of opinion in society.

The five most important and classic sections of a daily newspaper are politics, economy, culture, local affairs and sports; In addition, today there are often science, travel, entertainment and more. A newspaper consists of individual folded layers of paper that are not stapled together. These layers are also called books. In the case of daily newspapers, politics is always in the first book, and economics is usually in the second; then culture and sport follow. A daily newspaper consists of two parts, the editorial part and the advertising part. Both must be clearly different from one another in terms of design.

In the past there were almost exclusively full editorial teams who wrote and created all the articles for their publications themselves. Today, especially with local and regional newspapers, there is a trend towards general editorial offices, mainly for cost reasons .

Readers can express their opinion with letters to the editor , now often also in the form of an e-mail or blog comment. For the newspaper, a letter to the editor means feedback and strengthens the bond between readers and newspapers. Today newspaper publishers also provide other services for their readers, for example they organize events or trips, and they often sponsor cultural events.

An Allensbach survey from 2002 on the subject of “Trust in the media” showed that 32% of those surveyed in Germany enjoy television more credibility than newspapers, in which 19% have greater trust.

In 2004, 299 of a total of 443 German districts (districts and cities) were so-called single - newspaper districts that were only supplied by a daily local or regional newspaper. Many of these titles cooperate closely with others and are partly identical to them. All newspapers that appear with a common cover are also referred to as a " journalistic unit ". In 2006 there were 137 such units in Germany, which, in view of the wide range of collaborations, are seen as the best statistical approximation for newspaper head offices and thus as a measure of journalistic diversity.

The number of economically independent, competing units is much lower, since the few large newspaper publishers in particular own many newspapers and journalistic units.

In 2009 there were 351 daily newspaper titles in Germany with a total daily circulation of 25.31 million, of which 334 were local or regional daily newspapers (circulation: 14.85 million). According to the eighth date collection of German daily newspapers that Walter Schütz on behalf of the Academy of Music and Drama in Hannover conducted, there were 2,012 333 company legally independent newspaper publishers in Germany. These 333 newspapers were looked after by 130 full editorial teams and publish 1,527 different local editions.

The Kölnische Zeitung was considered to be the first supraregional and undisputed leading German-language daily throughout the 19th century .

The most sensible differentiation from purely regional newspapers is achieved through the criterion of nationwide availability in retail sales in kiosks and supermarkets as well as through the nationwide perception and opinion-forming function of the main editorial offices. The newspapers recognized in this way contain - with the exception of the tabloid Bild - a quantitatively and qualitatively clearly above-average political, features and economic section. Since the weight in the formation of public opinion depends on the size, equipment and competence of the editorial team, it differs between the newspapers. In addition, it changes over time, so a list cannot be considered permanent.

The national daily newspapers in Germany with a circulation of 20,000 or more are:

* Boulevard ** with an economic focus

The supraregional newspapers are often classified in the political spectrum of Germany: The Süddeutsche Zeitung is considered to be left-wing liberal, the Frankfurter Allgemeine Zeitung (FAZ) as conservative-liberal, the world as conservative. The left-wing alternative, the daily newspaper (taz), has significantly lower circulation figures .

The Berliner Tagesspiegel , which describes itself as the "Newspaper for Berlin and Germany", stands on the border between a national daily newspaper and a regional newspaper with national standards . The Börsen-Zeitung is also published throughout Germany in Frankfurt am Main with an economic focus.

In 2013, the crisis in which almost all daily newspapers in Germany find themselves became unmistakable due to the bankruptcy of the Frankfurter Rundschau and the discontinuation of the Financial Times Deutschland . Daily newspapers in other countries have similar problems. The reasons given include: 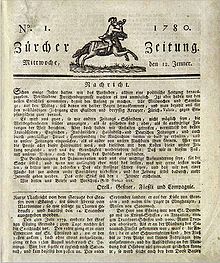 Due to the language conditions in Switzerland, one can differentiate between French, Italian and German-language newspapers. The Neue Zürcher Zeitung is considered a liberal-conservative newspaper, the Tages-Anzeiger as a left-wing liberal. In French-speaking Switzerland , Le Temps is a national newspaper. The most widely read daily newspapers in western Switzerland are the tabloid Le Matin , followed by 24 heures (with the headline Tribune de Genève ).

The daily newspapers with the highest circulation are the tabloids. The commuter newspaper 20 Minuten is the newspaper with the highest circulation, closely followed by the tabloids Blick in German and Le Matin in French-speaking Switzerland. In addition to the appearing in the morning free newspaper 20 minutes (respectively 20 minutes in western Switzerland) of Tamedia in the evening in public places and railway stations evening view of Ringier distributed.

The national, large-format daily newspapers in Austria are Der Standard , Die Presse , der Kurier , Salzburger Nachrichten and Wiener Zeitung . The latter - founded in 1703 - is the oldest daily newspaper that is still published worldwide.

The paper with the highest circulation by far is the small-format Kronen Zeitung ("Neue Kronen Zeitung" up to 2000), followed by the Kleine Zeitung .

On September 1, 2006, the 17th Austrian daily called Österreich came onto the market with an initial circulation of 250,000 (up to 600,000 on weekends). The publisher is the Austrian journalist and media maker Wolfgang Fellner .

The national high-quality daily newspapers in Denmark are Berlingske Tidende , Politiken and Morgenavisen Jyllands-Posten . Børsen , Dagbladet Information and Kristeligt Dagblad are of lesser circulation and importance . There are also the boulevard- oriented Ekstra Bladet and BT

The largest French daily newspapers differ significantly in their basic political stance. The sheets with the highest circulation are Le Figaro (2014: 325,459 copies) and Le Monde (2014: 298,529 copies, of which 21,526 abroad). Le Monde is the most widely read French daily newspaper abroad . Traditionally conservative, Le Figaro is part of Groupe Dassault , an industrial, defense and media company that owns over 70 newspapers. Le Monde is left-wing liberal and until June 2010 was mostly owned by the editors. It now belongs to Pierre Bergé , who is close to the French left . It is the only French daily newspaper that appears in the late afternoon.

The largest daily newspapers in Luxembourg are the Luxemburger Wort , the Tageblatt. Newspaper fir Lëtzebuerg and the Lëtzebuerger Journal . The newspapers vum Lëtzebuerger Vollek and Le Quotidien are of lower circulation and importance .

Daily newspapers in the Netherlands

The high-circulation paid daily newspapers in the Netherlands are De Telegraaf , AD , de Volkskrant and NRC Handelsblad . In West Germany these Dutch newspapers can usually be found in newsagents and updated daily. Since 1999, nationwide free newspapers with editorial content have also appeared, which quickly developed into serious competition to the paid newspapers.

The press landscape in the United Kingdom is divided into the more serious “Quality Press” on the one hand, and the Popular Press , which mainly deals with celebrities and human destinies, on the other. The four big reputable daily newspapers are the Daily Telegraph (conservative), The Times (conservative-right), The Guardian (left and social-liberal) and (since 2016 only digital) The Independent (left-liberal). All four also maintain Sunday newspapers . The Financial Times is also a newspaper with an economic focus. In general, British newspapers position themselves politically to a much greater extent than is the case in Germany and regularly make election recommendations.

The Sun , the Daily Mail , the Daily Mirror and the Daily Star are examples of the multitude of products in the tabloid press . They all have a (sometimes significantly) higher circulation than the daily newspaper with the highest circulation of the "Quality Press", the Daily Telegraph . In principle, the circulation of all British newspapers has fallen sharply in recent years, especially the newspapers of the "Quality Press", but they are losing immensely in readers and subscribers. The Independent discontinued its print edition on March 26, 2016 and has only appeared in digital form since then.

Specialized antiquarian newspapers offer older newspapers for museums , archives , film and television recordings and as a gift (newspaper from the day of birth, wedding or anniversary ) .