Politiken ( Eng. " Die Politik") is a Danish daily newspaper and, along with Berlingske and Jyllands-Posten, one of the three largest newspapers in Denmark . Your editorial office is located in the Politikens Hus on Rådhuspladsen in Copenhagen .

The newspaper was founded by the three liberal writers Viggo Hørup , Edvard Brandes and Hermann Meyer Bing on October 1, 1884 in Copenhagen to publish an organ for the European wing of the liberal Danish party Venstre . At that time, Politiken had a print run of 2,000 copies and cost five Øre .

Politiken Weekly was later added, a weekly edition for Danes and Danish speakers abroad. Because of the competition from free newspapers and news portals on the Internet, the circulation has continuously decreased since the end of the 1990s , which happened at the same time as other Danish daily newspapers. In July 2011, a circulation of just 92,660 copies was achieved, making Politiken third among the largest daily newspapers in Denmark.

The newspaper is now part of the left-liberal spectrum. Politiken has been associated with Jyllands-Posten in JP / Politikens Hus A / S since 2003 . However, both newspapers have retained their different profiles. The tabloid Ekstra Bladet also belongs to the group .

From 1993 until his death in 2011, Tøger Seidenfaden , who is considered one of the most influential journalists in Denmark in recent decades, was editor-in-chief of the paper. His successor from 2011 to 2016 was Bo Lidegaard , who in turn was succeeded by Christian Jensen .

On the occasion of the dramatic findings from the UN Climate Change Conference in Katowice in 2018 , the editor-in-chief Christian Jensen announced that the paper was increasingly committed to climate protection : “We understand the seriousness of the situation. [...] From now on we will act and no longer just talk. ”As a result, politics increased reporting on the climate crisis , ended the possibility for his employees to travel by air on official domestic routes and severely restricted reporting on long-term destinations in the travel section.

Politiken is a member of the European Investigative Collaboration (EIC). 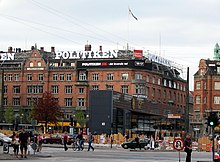