The Heinkel HE 57 “Heron” was Ernst Heinkel's first attempt to gain a foothold in metal aircraft construction. The first version of the amphibious aircraft was too heavy and could not take off from the water during the "taxiing tests" in April 1930.

In December 1930, the completely redesigned model went into flight testing again and was approved in May 1931. However, the machine was not a commercial success, Heinkel was only able to sell one copy (to the German Aviation School on Sylt ). After a crash landing on July 30, 1937, the "Heron" was scrapped. 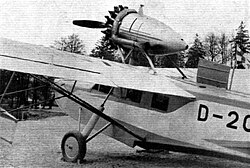 Commons : Heinkel HE 57  - Collection of images, videos and audio files