Seaplane is the collective term for aircraft that are constructed so that they can take off and land on bodies of water. A general distinction is made between float planes and flying boats. If a flying boat can also operate on airfields on land thanks to an additional, retractable wheel landing gear, it is called an amphibious aircraft . The general flight rules also apply to seaplanes .

Land plane equipped with floats ( Noorduyn C-64 ), the “step” can be seen on the underside of the float

Instead of a wheeled work has a float plane over - usually two - boat-shaped, sleek swimmers (ger .: floats ), which are closed on all sides and are connected mostly over strained struts to the fuselage. At standstill, they act by their displacement as floats , floats so the aircraft. The swimmers are designed in such a way that when accelerating during the take-off run they will soon start gliding with little resistance . The aircraft can then soon reach its take-off speed and take off from the surface of the water. The so-called step (engl .: float step ) on the bottom as just before the half float length facilitates the transition to slide through a targeted separation of the water flow from the rear underwater part of the float. Often the swimmers at the stern are equipped with small, foldable water oars to be able to steer more safely when maneuvering on the water (e.g. when mooring or driving to the start). Some types, especially light aircraft, can be converted from swimmers to wheeled undercarriages and vice versa with relatively little effort.

Similar - only built relatively higher - are seaplanes with a center-mounted under the fuselage central float . They are very stable when sailing on rough seas. However, this type became rare because mooring on the jetty is more difficult with three swimmers than with two swimmers of the classic float plane. In the beginning there were also 3-swimmer types with a tail swimmer at the stern or a bow swimmer. These had disadvantages due to their higher air resistance .

In flying boats, the lower part of the hull is designed like a boat hull with a strong chin . To increase stability on the water, flying boats often have lateral, sometimes retractable, support floats or fin stubs on the hull at the wing ends. In terms of aerodynamic resistance and seaworthiness, flying boats are superior to float planes.

Three-sided view of the Blackburn B.20, which combined elements of flying boats and float planes

There were also mixed types that combined elements of a flying boat and a float plane. This included, for example, the Blackburn B.20 , which had a retractable lower hull that acted like a swimmer during take-off and landing, but when in flight had the aerodynamic advantages of a flying boat. With its oversized central float attached just below the fuselage, the Short Scion Senior FB also combined elements of float planes and flying boats. Seaplanes with special design features were z. B. the Piaggio P.7 with hydrofoil and the Convair Sea Dart with ski runners . However, these designs could not prevail. 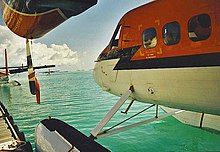 Floatplane at the harbor ( Maldives )

Floatplane ( DHC-2 Beaver ) in the port of Hamburg 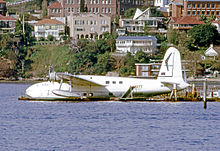 Short Sandringham flying boat in Sydney in 1970 at Ansett Australia

The first short "water flight" ending in a breakwater was that of Wilhelm Kress on October 3, 1901 at the Wienerwaldsee . On March 28, 1910, the Frenchman Henri Fabre managed the first successful flight with his Hydravion seaplane on the Étang de Berre . Almost at the same time, August von Parseval undertook flight tests on the Plauer See , which showed that the flying machine was not capable of water start. The first successful flight and landing of the machine took place on October 7, 1910, but with take-off from land. Glenn Curtiss was the first American to take off a seaplane from the water on January 26, 1911.

The first seaplane in regular service flew with the KuK Marine (Austrian monarchy) from the Pula location in spring 1915 with an aircraft from Lohner-Werke "Type E".

Germany's first sea airline opened on August 10, 1925. The water of the airports along the Elbe leading water airline Altona-Dresden lay in the district Neumühlen the then independent city of Altona and the Dresden district Johannstadt . In use were machines of the Junkers F 13 type , which ran daily in both directions and carried up to four passengers as well as consignments of the Deutsche Reichspost ; the scheduled flight time was about four hours, including a stopover in Magdeburg . After it became clear in the winter of 1925/26 that the route could not be operated profitably (also because of the ice drifts on the Elbe), the newly founded Deutsche Lufthansa AG took over the route in January 1926 and replaced it in the summer of the same year in favor of a regular one Land airline Dresden - Hamburg still. The seaplanes were converted to landing gear.

In 1926, the Cologne-Duisburg-Rotterdam regular service with Junkers F 13 from the “Kunibertsrampe” pier was started. From 1927 it was taken over by Deutsche Luft Hansa; In 1928 he was hired. In 1935 Lufthansa used the Junkers W 33 from this pier for the Cologne-Frankfurt route. For 1927 and 1928, landings of catapult aircraft as part of the postal service of overseas steamers in the port of Cologne-Niehl are also documented. The last seaplane is also said to have been stationed there by the Royal Navy after the Second World War.

The competitions of the Schneider Trophy , an air race for seaplanes that took place from 1913 to 1931, were legendary .

When crossing the Atlantic , the seaplanes retained their importance even longer. Numerous airlines connected America and Europe with them in the 1930s. To cover the long distance, the safe port of Horta in the Azores was a suitable stopover for refueling. Horta's history as a water airport began with the reconnaissance flight of the American Albert C. Read , who landed there in 1919. In 1937 a French seaplane ( Hydravion ), the Atlantique I , crashed off the port of Antibes , drowning five crew members.

The first jet -powered seaplane was the Saunders-Roe SR.A / 1 fighter . It was developed in Great Britain in 1947 and had a maximum speed of 824 km / h. Because of its construction with the buoyant hull, it is one of the flying boats.

Today seaplanes are often used between islands or in impassable countries ("bush flying", as is common in remote regions of Alaska or Canada ) and also for search and rescue flights. The only water airports with connections to an international airport are the Malé Water Aerodrome ( Maldives ) and the Vancouver International Water Aerodrome (Canada). The largest water carriers Trans Maldivian Airways and Harbor Air also operate there . In Germany, the operation of pure seaplanes is only possible to a limited extent due to the airport requirement. There are few areas for seaplanes and flying boats . Commercial flight operations in Germany are mainly limited to training and sightseeing flights. In Scotland all waters are open, in the province of Salzburg none. The Scalaria Air Challenge approved flying boat and seaplane meeting takes place every year on the approximately 3000 m × 300 m small northeastern part of Lake Wolfgangsee in Upper Austria.