The DHC-2 Beaver is a STOL -enabled light transport, liaison and observation aircraft from the former Canadian aircraft manufacturer de Havilland of Canada Ltd. From 1947 to 1967 over 1600 copies were built. Since 2008 Viking Air , also in Canada, has been producing a turboprop version from conversions of used copies.

As a classic bush plane, the Beaver was widely used in over 50 countries, as a robust, reliable means of transport for up to 7 passengers or around 900 kg of cargo. Thanks to the possibility of being equipped with wheels, floats or ski runners, and the excellent short take-off and landing properties, the Beaver is extremely flexible. There are currently around 500 beavers in use worldwide.

Construction of the Beaver began in late 1946 following a tender by the Ontario Department of Agriculture and Forestry for a universal work aircraft. It should specifically meet the requirements of bush aviation. After a year, the first prototype with the registration number CF-FHB-X was completed, which took off for the first flight on August 16, 1947. The excellent flight characteristics and the ability to operate from unpaved runways were already evident in the initial phase of testing.

After the Province of Ontario placed an initial order for four Beaver, series production of the DHC-2 Mk.1 began. On March 12, 1948, the Beaver received its Canadian type certification. The US Search and Rescue Command in Alaska wanted to procure 22 machines in 1949, but this could not be implemented due to consideration for its own US aviation industry. The break-in in the US American market only succeeded in 1951. As part of a joint competition between the US Air Force and the US Army, the DHC-2, along with six other models, was tested for its use as a light multi-purpose aircraft. The YL-20 won the competition, but an order from the US armed forces for the L-20A could not be awarded until 1952 after a special approval process by the American Congress. By the end of 1960, De Havilland of Canada had delivered 968 L-20s to the US Air Force and US Army. There they were used as a liaison aircraft as well as for search and rescue , artillery observation and the transport of wounded, including in the Korean War and the Vietnam War .

In order to achieve a general improvement in performance, the DHC-2 Mk.2 variant was developed in 1953, which differed from the basic version with the 570 hp Alvis Leonides 502/4 nine-cylinder radial engine, a slightly larger wingspan and a larger vertical tail surface. There was no series production because the improvement in flight performance was too small. In June 1963, the work on the version DHC-2 began Mk.3, also known as Turbo Beaver referred to a turboprop -Triebwerk United Aircraft of Canada PT6 A-6 used. The Beaver cell No. 1525 was used for the conversion . On December 30, 1963, the machine (CF-ROM-X) took off for its first flight. By February 1972, de Havilland Canada was able to complete 60 Turbo Beaver.

On February 24, 2006, the Canadian company Viking Air bought the rights to the DHC-2 and other DHC aircraft from Bombardier Aerospace . Since then, Viking Air has been marketing the DHC-2T Turbo Beaver , which is also powered by a PT6A-34 propeller turbine with 680 hp.

3-sided crack of the beaver

A Beaver (N130WA) stationed in Germany, which was transferred across the Atlantic several times (Pilot W. Röschlau)

Auxiliary fins on the horizontal stabilizer of a Beaver with floats

The Beaver is a single-engine, braced shoulder- wing aircraft in all-metal construction. The wing is two-spar and has a rectangular floor plan with a continuous surface depth of 1.59 m. The landing flaps and ailerons are designed as slotted flaps . The landing flaps are retracted and extended hydraulically. Together with the landing flaps, the ailerons are also lowered up to 15 °. A NACA 64A416 / 4416 is used throughout as a wing profile inside and outside , the V-position is 2 ° upwards. The horizontal stabilizer is dampened and the elevators have a horn compensation and Flettner trim. The fuselage is constructed in three different sections as follows: At the front in the engine area as a tubular steel framework with dural planking, in the cabin area as a planked aluminum frame structure, the tail unit is also made in half-shell construction with dural planking. The seats in the cabin can be removed quickly for freight transports, and relatively bulky goods can also be loaded through two 1.2 m × 0.99 m side doors. The glazing in the side doors is vaulted outwards in the shape of a bubble to enable a better field of vision for observation tasks. The controls are amazingly easy and enable fatigue-free flying. By adding floats, it is sometimes necessary to attach vertical stabilization surfaces to restore directional stability. For this purpose, a single keel surface was sometimes installed instead of the tail wheel (see head picture) or thin sheet metal fins in the columns of the elevator compensation horns.

The standard engine is the Pratt & Whitney R-985 SB3, an air-cooled nine-cylinder radial engine with a displacement of 16.14 l (985 cubic inches ). The engine is equipped with a mechanical supercharger and has a starting power of 335 kW (450 hp). The engine can be started either with a direct-acting electric starter or an electric flywheel starter with the option of using a hand crank. The engine drives a two-bladed constant-speed variable-pitch propeller in all-metal design of the Hamilton Standard 2D30 237 type with a diameter of 2.59 m.

The three fuel tanks with 35, 35 and 25 US.liq.gal content (approx. 133 l, 133 l and 95 l), which can be switched over individually with a tank selector switch, are located one behind the other under the cabin floor. In addition, the Beaver can be equipped for long-haul operations with 2 × 21.5 US.liq.gal (approx. 2 × 81 l) wing tip tanks , the contents of which can be transferred to the foremost fuselage tank by gravity if necessary. This results in a total fuel capacity of 95 or 138 US.liq.gal without or with additional flat top tanks (approx. 360 or 522 l).

The following chassis variants are possible:

The various features have a limiting effect on the flight performance due to increased air resistance or increased curb weight - compared to the land version (see table of technical data).

In addition to the US Air Force and the US Army, 15 nations procured the L-20A for a wide variety of purposes, mostly for use under extreme conditions such as in the Antarctic or the tropics. The L-20 was mainly used in the Korean War and Vietnam War to transport seriously wounded people from inaccessible areas. But also the transport of freight and personnel from base to base, troop observation, artillery observation and search and rescue was part of the routine of the L-20A.

In 1962 the designation system was changed and the L-20 was renamed the U-6A. Many copies remained in military service until after 1970. To date, many Beavers are used as DHC-2 in over 50 countries.

As part of the Mutual Defense Aid Program (MDAP), the DeHavilland L-20 was also delivered to allied countries. 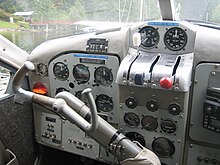