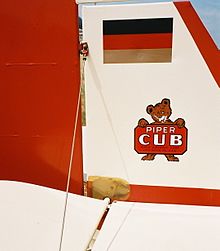 The little bear found on all civilian J-3 Cubes

The Piper J-3 Cub is a single-engine, two-seat light aircraft produced by the US aircraft manufacturer Piper Aircraft Corporation , of which 20,057 copies were produced from 1938 to 1947. These included around 5600 military liaison aircraft with the designations L-4, O-59 and UC-83. Of the total number, 150 copies were built in Canada. Successors to the J-3 were the PA-11 and finally the PA-18 .

The Piper J-3 is based on the last version of the Taylor J-2 Cub and differed from this only by a slightly reinforced airframe and a few other small modifications. The J-2, built from 1936 to 1938, was the result of a design revision of the original Taylor E-2 Cub by Walter Jamouneau , who made the E-2 suitable for mass production. Piper was a shareholder in the Taylor Aircraft Company until 1935 , but then took over the entire company and continued to build the Taylor J-2 after the company was renamed Piper Aircraft Corporation in November 1937 or January 1938 as the Piper J-2 Cub . The transition of production from the J-2 to the J-3 ran seamlessly in 1938; an exact first flight date is not known for the J-3. In the first year of production in 1938, Piper was able to deliver around 650 J-3s. The production of the J-2 was only 23 machines in the same year.

J3C-65 of the Civil Air Patrol

To replace the 40 HP variant, Piper brought the Continental engines J3C-50 and J3C-65 (common ATC # 691 from July 14, 1938), equipped with 50 HP and 65 HP respectively, onto the market. The J3C-50 was available in the Trainer and Cub Sport versions . Shortly after Continental, Franklin and Lycoming also introduced corresponding 50 hp engines. Piper felt obliged to build this into the J-3 as well. After Taylorcraft and Aeronca had increased the engine power in their machines to 65 hp, Piper followed in 1940 with a higher-revving variant of the Continental A50, which made 65 hp and was accordingly referred to as the Continental A65 . The variant sold so well that at times a copy was completed every 70 minutes. By the end of production for civil use in 1942 alone, 300 units had been delivered for use in flight schools.

The J-3 is a light, shoulder- wing, cabin aircraft for two people on tandem seats . It has a fixed tail wheel chassis . The fuselage structure was made of slightly bent tubes made of chrome-molybdenum steel of American quality 4130 and 1025. The fuselage was then covered with fabric. Entry is from the right-hand side via a door that can be folded down. The interior of the J-3 is about 18 cm longer than the J-2. The windshield and windows are made of Pyralin a pyroxylin plastic. The two-part wings are equipped with spruce solid wood spars and metal ribs made of NiCrAl. The leading edge is dural-planked and the entire wing is covered with fabric. The grinding spur with a leaf spring could also be equipped with a tail wheel. There were ski runners for the main landing gear. It was also possible to exchange it for D-1070 Edo floats. The rudder of the fabric-covered tail unit was larger than that of the J-2.

As with the J-2, a Continental A-40 engine with an output of 29 kW (40 hp) initially served as the drive. This was later increased to up to 65 hp. The aircraft reaches a cruising speed of approximately 75 mph (approximately 125 km / h).

The flight characteristics can be described as "good-natured" as long as the flight is not too slow. Like most tailwheel aircraft, this type of aircraft tends to break away when landing under the influence of crosswinds . The surface profile of the Piper J-3 is designed for low speeds. Therefore, in contrast to the PA-18, the J-3 has no landing flaps .

The Piper L-4 or Piper O-59 Grasshopper is a variant of the Piper J-3 modified for military purposes and is considered to be the most widespread type of "L" aircraft. The prefix "L" (abbreviation for "Liaison") was the USAAF designation for light liaison and reconnaissance machines. A total of around 5,800 pieces of the L-4 were produced.

The L-4 was used as a courier, reconnaissance and observation aircraft in World War II ; it was also used to drop smoke bombs and lay telecommunication cables. For this purpose, this model received larger windows on the sides and above the seats compared to the Piper J-3, in order to improve the view, especially to the rear. With the help of the Brodie system , the L-4 could also be used as a reconnaissance aircraft on board smaller ships.

Acceptance of the Piper Cub by the USAAF / US Navy:

The Piper J-3 and L-4 served as a model for numerous other aircraft. The company Maule Air consistently developed the construction today. With the aircraft from Cubcrafters, American Legend Cub and AVIAT Aircraft Aviat Husky , modern derivatives can still be purchased today. The RANS S-7 Courier and the Zlin Aviation Savage are current interpretations in the form of microlight aircraft, which continue WT Piper's original idea of ​​offering an aircraft for everyone. From this point of view, the J-3 is one of the most important aircraft in aviation history because it played a similar role in aviation as the Ford Model T played in the spread of the automobile. 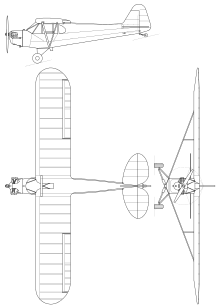