Space axes and rudders of an airplane

Animated representation of the aircraft controls

Ailerons are generally movable flaps on the wing trailing edges that move simultaneously and in opposite directions when the roll controls are operated. The aileron, which is moved down, increases the lift on its side , which raises this wing. The other aileron moves up, reducing lift and lowering the wing. This creates a rolling movement around the longitudinal axis, which in turn brings about , for example, the required lean angle as the starting point for a coordinated turn .

If several aerodynamically effective surfaces share the trailing edge of a wing, the ailerons are usually the outermost control surfaces in order to achieve good leverage when generating the roll moment, while landing flaps are usually found in the inner area of ​​the wings. Jet airliners often have several aileron flaps on each wing side, which differ in length, depth and position and which are designed for different speed ranges ( low, high speed ).

The control flaps are operated electro-hydraulically or electrically by means of cables, push rods, hydraulic actuators ; in larger aircraft, there are usually several options for redundant protection. The ailerons are trimmed using so-called trim rudders .

Special forms in connection with other control surfaces

In modern aircraft construction, the original functions of individual control surfaces are often mixed and superimposed with other control functions in order to improve controllability, increase flight safety and improve the performance of the aircraft. The introduction of flight control computers and fly-by-wire - flight controls support these new opportunities.

In commercial aircraft, some of the spoiler segments - usually those furthest out of the wing - are usually used to support the ailerons . With a control input, in addition to the upward moving aileron of the wing on the inside of the curve, the spoiler is actuated a little (extended), while the spoiler flaps on the opposite wing remain in their retracted rest position. This counteracts the negative turning moment generated by the ailerons in addition to supporting the taxiing by reducing lift on the wing to be lowered , as the resistance on the wing inside the curve is increased, which in turn results in a meaningful supporting yaw moment in the curve direction. On the Airbus A380 , for example, six of the eight spoiler segments on each side are used to support the ailerons in the outer wing. For the first time, roll spoilers were used on the Northrop P-61 night fighter , the actual ailerons were tiny.

In the later models of the B-52 (G&H), ailerons were completely dispensed with in favor of the roll spoiler. The artificial word for this was Spoilerons from Spoiler and Aileron.

In many modern fighter planes with the usual carrying surface / tail unit design, the elevators , which are usually designed as pendulum rudders without a damping surface, support the ailerons by moving them in opposite directions - superimposed on the rudder deflections required for the elevator control - like ailerons. In the tornado , these counter-rotating elevators completely replaced conventional ailerons. This type of construction is also called Taileron ( combined tailplane and aileron ) in the technical term . The advantage of the extremely large landing flaps that are possible over almost the entire length of the wing (and thus high payload or high lift generation for tight turns in air combat ) is bought at the cost of a slightly reduced roll rate . And therefore very effective - - to this important characteristic of a fighter plane to bring the required high values, the wings of the tornado relatively far outside were carried out with a spoiler ( Roll spoiler equipped) per wing.

With flying wing and delta configurations , control surfaces are often used on the trailing edge of the wings, which simultaneously execute superimposed control deflections for altitude and roll control. These are designated with the made-up word elevon (from the English terms elevator for elevator and aileron for aileron).

If the aileron flap takes on another function as a flap flap to increase lift (landing aid) or to optimize profile due to its adjustability in the same direction , it is called a flaperon (from the English terms flap for flap and aileron for aileron). An example of this is the LS3 glider .

Drawing for the Boulton patent, 1868

In the 19th century, Clément Ader , Charles Renard , Edson Gallaudet , Alphonse Pénaud and John Joseph Montgomery were already theoretically concerned with the possibility and construction of an aileron. The Briton Matthew Piers Watt Boulton patented himself in 1868 with the patent specification Aerial Locomotion ailerons to improve movement in the air. 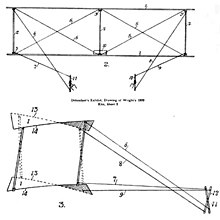 Roll control by twisting - without ailerons - by the Wright brothers

In the early days of aviation , roll control was often achieved without actual ailerons, but by twisting the wing. The entire wings were twisted slightly in opposite directions by means of cables , which also resulted in a difference in lift between the two wings due to the different angles of attack and thus a roll of the aircraft.

In addition to the Wright Flyer, wing twisting was also used by other early powered aircraft, such as the Blériot XI (1908), the Etrich Taube and its replicas (1909), the Morane-Saulnier N (1915) and the numerous variants of the Fokker monoplane (1915), as well as some gliders like the Harth-Messerschmitt S7 (1918).

The Wright brothers , whose aircraft were controlled by twisting their wings, were of the opinion that their broad patent also covered the aileron roll control method used by Glenn Hammond Curtiss and therefore litigated Curtiss.

A Farman III seen in flight from below in January 1910. The ailerons integrated into the wings are easy to see.

For the first time in practice ailerons were to control the roll control by Robert Esnault-Pelterie on a non-powered biplane - glider used in the 1904th At first they were realized additional areas. Ailerons, which are integrated as movable elements in the main wing, were first used by Henri Farman on the Farman III in 1909 .

Compared to the use of ailerons, the wing twist has the advantage that there are no gaps in the wing caused by the rudder flaps and that the profile is maintained. Thus, the aerodynamic drag can be easily reduced. However, the twist is structurally difficult to reconcile with the necessary torsional strength of more modern, usually swept wings: When flying at high speeds, i. H. At a small angle of attack , strong torsional forces arise (lift is almost only produced at the trailing edge, so the wing is twisted forwards), which is counteracted with the torsion nose ("D-Box") , which is designed to be very rigid .

A disadvantageous secondary effect of the aileron use (also called aileron yaw moment) arises from the fact that, due to the different pressure conditions on the top and bottom of the wing, the upward turning aileron on the inside of the curve reduces the flow resistance of the wing to be lowered, and the downward turning aileron upward the opposite side by increasing the lift generation and the associated increase in drag not only lifts the wing, but also slows it down: consequently, in addition to the intended roll movement, the aircraft yaws to the opposite side (= negative). For this reason, the operation of the aileron leads to a negative turning moment (i.e. moving the aircraft nose against the intended steering direction), which is why clean turns in the aircraft are initiated and flown through in coordination with aileron and rudder (in the direction of the curve to compensate for the negative turning moment) have to.

This is due to the leverage ratios (large span in relation to the total length for a great lever for the attacking adverse yaw and a relatively short Leitwerkshebelarm) especially in the gliding of great importance to low-resistance curve flights without pushing to achieve or slopes (lubrication); The thread on every glider serves as an aid for coordinating the rudder .

The negative turning moment can be weakened or largely neutralized by constructive measures. A mechanically easy to implement possibility of attenuation is a differentiated control with different deflections, in which the aileron flaps deflect less downwards than upwards. In this way, the deflection is adapted to the different pressure conditions on the top and bottom of the wing and the moments of resistance become more even. Another possibility is the design of the rudder itself as a Friese aileron , in which the hinge pivot point of the rudder flap is placed in such a way that when the flap is deflected upwards, the resistance on the underside of the flap gap is greatly increased in order to create a compensating moment of resistance . Furthermore, the use of spoilers as roll spoilers in larger aircraft (see above) helps to neutralize the turning moment; Such aircraft often also have a so-called yaw damper , which automatically adjusts the rudder deflection for different flight conditions; In this case, the pilot does not need to consciously steer the rudder. Likewise, a certain, meaningful rudder deflection can be automatically added to the aileron control input mechanically or via the flight control computer.

If the aileron is operated, the angle of attack on the wing on which the aileron deflects down increases due to the stronger geometric curvature of the profile skeleton line . In addition, the ailerons swinging downwards into the area of ​​higher pressure also causes an increase in drag.

In extreme slow flight this can be one-sided stall perform on that wing, which he, rather than to move up, down "falls". Since the increased resistance also causes a turning movement around the vertical axis, this can cause the aircraft to spin . This effect is, technically somewhat imprecise, called "aileron reversal".

Most modern aircraft have hardly any aileron reversal due to suitable design measures.