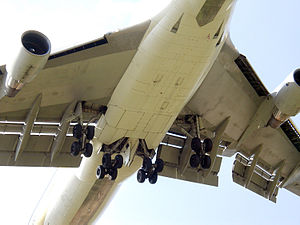 In the Krueger flap (engl .: leading edge flaps , rare: Kruger flap , it being understood that " droop leading edge flaps " a Kippnase hereinafter) If it is an aerodynamic aids on a wing of an aircraft , which improves the speed flight characteristics. It belongs to the buoyancy aids .

The Kruger flap was developed in 1943 by the German aeronautical engineer Werner Krüger and a patent was applied for on January 12, 1944 by the Aerodynamic Research Institute in Göttingen (AVA). The first use of a nasal valve took place in 1952 on the sickle wing of the Handley Page HP80 Victor . However, it was a tilted nose developed by Ludwig Bölkow ( DRP 496 916 of August 3, 1939). The first aircraft with a Kruger flap was the P-16 from the Swiss Flug- und Fahrzeugwerke Altenrhein with its first flight in 1955.

It is located on the front underside of the wing and its effect is comparable to a slat , but its design is simpler. The two buoyancy aids are also combined. Another form of the Kruger flap is used, for example, on Airbus A300 and A310 aircraft. In addition to slats, these machines also have small Kruger flaps near the fuselage. This serves to create a clean aerodynamic transition between the actual leading edge slat and the fuselage.

The Nichtausfahren the Krueger flaps to lift aid led on 20 November 1974 crash of Lufthansa - Boeing 747-130 D-ABYB "Hessen" shortly after taking off from Nairobi (see Lufthansa Flight 540 ).