Emblem on the outer wall of the German Patent Office

The German Patent and Trademark Office ( DPMA ), until 1998 the German Patent Office , is a higher federal authority in the business area of the Federal Ministry of Justice and for consumer protection with headquarters in Munich and branches in Jena , Berlin and Hauzenberg . In 2010 it employed 2,735 people, including 827  patent examiners .

The patent office is the central authority in the field of industrial property protection in Germany and is responsible, among other things, for the granting of patents , for the registration of utility models , trademarks and designs as well as for informing the public about existing industrial property rights. Recognized cooperation partners of the DPMA in the federal states are the patent information centers , united in the Arbeitsgemeinschaft Deutscher Patentinformationszentren e. V.

The legal basis is Section 26 of the German Patent Act . Originally, complaints against decisions by the German Patent Office were decided by the latter itself; The Federal Patent Court has been responsible for this since 1961 .

On May 25, 1877, the first uniform German patent law was enacted, which also provided for the establishment of an authority that should grant patents. On this basis, the Imperial Patent Office was founded in Berlin on July 1, 1877, as the first German patent authority . On July 2, 1877, the first German patent for a “process for the production of a red ultramarine color ” was granted by the inventor Johannes Zeltner . The first brand Perkeo was registered on October 16, 1894 for a Berlin lamp manufacturer.

Initially, the office was housed in a building owned by the Reich in Wilhelmstrasse . In April 1879 it was moved to tenement houses on Königgrätzer Straße (today Stresemannstraße ), and in March 1882 to other buildings on the same street. In 1891 the office moved into a new building at Luisenstrasse 34 in Berlin-Mitte , and around 1895 an extension was added to property no. In 1905, the patent office building designed by architects Solf and Wichards was moved to the corner of Gitschiner Strasse and Lindenstrasse in Berlin-Kreuzberg , with a characteristic 243-meter-long front on the elevated railway line .

In 1919 the authority was renamed the Reich Patent Office.

After the end of the Second World War in 1945, the patent office ceased operations after the Allies had confiscated patents, trademarks and trademarks that were part of the foreign assets of German owners due to Articles II and X of Control Council Act No. 5 of October 30, 1945 found. Article II of this law was repealed on August 31, 1951, but the entire Control Council Act was not repealed until March 15, 1991 when the Treaty on the final regulation with regard to Germany came into force . Until 1951 the confiscated patents were used technologically and economically by the Allies.

On October 1, 1949, the German Patent Office opened its premises in the Deutsches Museum in Munich . Since then, patents in Germany have been called " German Federal Patent " followed by the patent number. The corresponding abbreviation DBP (initially also DBP ) is occasionally found on patented products for the purpose of association with a higher quality. In 1951 a branch office was opened in the old Reich Patent Office in West Berlin. In 1959 the patent office moved to its own building in Munich, which was designed by Franz Hart and Georg Hellmuth Winkler . 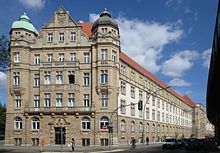 View of the Berlin Kreuzberg Patent Office, which moved into in 1905, at the corner of Gitschiner Strasse and Lindenstrasse, where the European Patent Office is also located

1990 Merger with the GDR patent office

In 1990 the German Patent Office merged with the Office for Inventions and Patents of the GDR in East Berlin . Against this background, an office was set up in Jena in 1998 , and most of the former GDR office in Berlin was relocated there. The office now has three locations (Munich, Jena and Berlin). In the same year the authority was renamed from the German Patent Office to the German Patent and Trademark Office , which is intended to take account of the increased importance of trademarks as the office's area of ​​activity.

The first president of the Imperial Patent Office was Karl Rudolf Jacobi until 1879 .

The last president of the Reich Patent Office was Georg Klauer , who died of suicide in 1947.

Office building of the German Patent and Trademark Office in Zweibrückenstrasse, Munich

Today's service building was built by the Munich agricultural office and the architects Franz Hart and Helmuth Winkler as a new building between 1954 and 1959 on the site of a barracks destroyed in the war. The first phase consisted of the five-story atrium, the second phase of the twelve-story high-rise parallel to the Isar. This urban dominant feature is visible from afar. The building is assigned to the context-conscious and artistically ambitious modernism.

30 years after the foundation stone was laid, there was a fundamental need for renovation. As part of this “major measure”, which was completed in 2001, a competition for art in architecture was also held. Dietmar Tanterl developed a media light sculpture for the canteen on the 10th floor . In the house, 28 photo works by Beate Passow were installed across the ten floors opposite the paternoster . The photo work "The Invention of Red Ultramarine" refers to the first patent specification of the Imperial Patent Office from 1877.

In 1984 the DPMA opened an inventor gallery. It should be "an incentive for all innovative forces to develop further and a signal to those responsible to promote them sustainably." It was expanded in 1987 and 1999 and since then has comprised 17 German inventors: Béla Barényi , Gerd Binnig , Ludwig Bölkow , Walter Bruch , Jürgen Dethloff , Artur Fischer , Rudolf Hell , Heinz Lindenmeier , Hermann Oberth , Hans Joachim Pabst von Ohain , Oskar-Erich Peter , Hans-Jürgen Quadbeck-Seeger , Ernst Ruska , Hans Sauer , Felix Wankel , Ernst- Ludwig Winnacker and Konrad Zuse .

The following important information is missing from this article or section:
Office buildings in Munich , Jena and Berlin
Help Wikipedia by researching and pasting it .