The peculiarity of the legal process in the financial jurisdiction is that there are only two instances here. After the complaint before the tax court has been rejected, the BFH can be appealed directly to the appeal. However, the prerequisite is that the tax court has approved the appeal to the Federal Finance Court in its judgment. If this is not the case, a complaint can be submitted to the Federal Fiscal Court, the so-called non-admission complaint , with the application to allow the appeal. If the Federal Fiscal Court allows the appeal to be revised, the procedure is immediately continued as an appeal procedure.

The legal remedy of the hearing complaint was created, with which only the violation of the right to be heard can be asserted (Section 133a Financial Court Regulations). In addition, the so-called counter-presentation is recognized, which can be raised informally. However, since the Federal Constitutional Court has strict requirements for the so-called clarity of legal remedies in the area of ​​legal remedies, the admissibility of the counter-presentation in specialist literature is questioned. The BFH has recently decided that the counter-submission is only permissible against amendable decisions, i. H. Decisions that do not have material legal force and only if serious legal violations are reprimanded. The so-called extraordinary complaint was previously recognized. With regard to the newly created complaint, the BFH no longer recognizes the extraordinary complaint.

The Bundesfinanzhof was established in 1950 in the tradition of the Reichsfinanzhof . However, this tradition is only of a formal nature, not a substantive one. Several presidents of the Federal Fiscal Court have repeatedly distanced themselves from decisions by the Reich Fiscal Court. A plaque inside the building is a reminder of the rulings of the Reich Finance Court, which uncritically understood the political guidelines of the National Socialist leadership. Particular mention should be made of the rulings on the so-called Reich Flight Tax, which was even levied on politically displaced persons.

Since December 2004, the BFH has been participating in the electronic court and administrative mailbox project together with the Federal Administrative Court . Briefs and other documents can be legally transmitted in electronic form to all participating courts and authorities quickly and securely. Participation in negotiations by the Federal Fiscal Court via video conference is not yet possible. 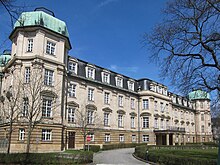 The Bundesfinanzhof, like the Reichsfinanzhof before , is housed in a historically interesting, listed building in the middle of an idyllic park on Ismaninger Strasse in the Bogenhausen district of Munich . In the previous building, the Montgelasschlössl , the Bogenhausen contract was signed in 1805 .

The so-called Fleischerschlösschen was built by Ernst Philipp Fleischer , a paint manufacturer and panorama painter, as a gallery and exhibition building. It was the largest example of an artist's residence in Munich, increased to the size of a castle. The building was also intended to serve as a community house with an attached picture gallery. Heilmann & Littmann designed the building from 1909 as a neo-baroque palace with house fronts, central projections and corner towers. Originally, a studio was planned in the north of the building, but this soon fell victim to the need to save. The construction had to be stopped completely in 1911 due to lack of money. After the First World War , the German Reich acquired the ruins and had them remodeled and expanded into the Reichsfinanzhof.

Significant works of contemporary and modern art are exhibited inside the building. The well-kept park is not open to the public.

The cases brought before the Federal Fiscal Court are decided by senates. The cases are divided among the individual senates according to subject areas and sometimes also according to letter criteria. There are currently eleven senates in place.

Judge of the Federal Fiscal Court

The judges of the Federal Fiscal Court are elected for life by the Judges' Election Committee of the German Bundestag and appointed by the Federal President. Currently (as of 2019) 59 judges work at the BFH, of which 16, i.e. 27 percent, are women.

See also : List of judges at the Federal Fiscal Court

In general terms, the Senates of the Federal Fiscal Court (as of 2018) have the following responsibilities:

Of particular importance are the III. and the VI. Senate, because their judgments affect practically every tax citizen and the broad impact is enormous. With the collective bargaining law, z. B. the rising progression curve and the spouse splitting, and the child benefit are affected by this almost every tax citizen and every family. In addition, the investment allowance, for which the III. Senate is responsible for the economic development of the entire accession area of ​​the former GDR of the utmost importance. The VI. Senate decides in all wage tax disputes, e.g. B. the deduction for income-related expenses. This affects all employees. The other senates of the Federal Fiscal Court often only affect the individual indirectly, as they essentially only decide disputes between companies or about certain types of income.

If there are different views on legal issues between the Senates, the Grand Senate is called upon. The Grand Senate consists of the President of the Federal Fiscal Court and one judge from each of the Senates in which the President does not preside. Its decisions set the course for future legal developments and often form the basis for future action by the legislature.

Tax jurisdiction in the Federal Republic of Germany