The Federal Patent Court ( BPatG ) is the second largest German federal court and is based in Munich . It was founded on July 1, 1961. The task of this court is to rule on certain legal disputes regarding industrial property rights (including patents and trademarks ).

Since the establishment of the German Patent Office in 1877, its decisions have been examined in an appeal procedure by special offices of the Patent Office itself. This division of tasks was initially retained after 1949 under the application of the Basic Law (GG). This gave rise to the problem that Article 19 (4) of the Basic Law opened legal recourse to independent courts for every violation of rights by public authorities. In 1959 , the Federal Administrative Court decided in the dispute as to whether the patent office's appeal committees were such independent courts that all decisions of the patent office were subject to the control of the administrative judiciary. As a result, the Basic Law was supplemented in 1961 by adding Art. 96 GG, according to which the Federation can set up a federal court for matters of industrial property protection, and the Federal Patent Court was brought into being in the same year using the authorization now created in the Basic Law.

The Federal Patent Court formally belongs to the ordinary jurisdiction as the only special court determined by federal law , because it according to Art. 96 para. 3 GG in the instance under the Federal Court is filed. In substance, the Federal Patent Court performs administrative tasks of legal control of the decisions of the German Patent and Trademark Office and the Federal Plant Variety Office . In addition, it is responsible for nullity actions with which third parties attack the validity of a national patent or a European patent for the area of ​​the Federal Republic of Germany or a supplementary protection certificate (for drugs and plant protection products) issued for this purpose. It is also responsible for the (very rare) issuing of compulsory licenses to these patents.

For legal disputes in which the violation of registered property rights is asserted, the Federal Patent Court is not responsible, but the ordinary jurisdiction of the states, mostly special chambers of certain regional courts .

Meeting room with IT equipment

Judge's bench in the meeting room with IT equipment

Meeting room with IT equipment

The Federal Patent Court decides the individual disputes through senates, the composition of which depends on the legal matter of the individual case (cf., for example, § 67 PatG and § 67 MarkenG ).

Both legally qualified members, who must be qualified to hold judicial office , and technical members, who must be competent in a branch of technology (mostly former examiners of the German Patent and Trademark Office ), act as judges . The composition of the senates is regulated in § 67 PatG, § 67 Abs. 1 MarkenG, § 18 Abs. 3 GebrMG and § 34 Abs. 5 SortSchG. Accordingly, the technical appeals senate and the utility model senate are staffed with three technical judges and one lawyer, the nullity senate with three technical judges and two lawyers, and the trademark senate and the legal appeal panel with only three lawyers. In 2017, 108 judges were employed at the BPatG, of which 29 were female and 79 female judges. The senates were composed of 59 technical judges, i. H. with technical and scientific training and 49 judges with legal training.

In May 2011, Beate Schmidt was introduced to her office as President. Vice-President has been Klaus Strößner since July 2010 .

The procedure before the Federal Patent Court is regulated by the individual laws on industrial property protection, in particular by the Patent Act and the Trademark Act , as well as, subordinately, by the civil procedure code. 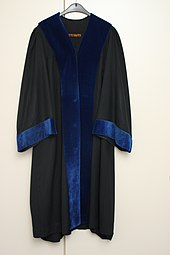 Robe at the Federal Patent Court

The official costume consists of an official robe and a beret . A wide white collar with drooping ends is worn with the black official robe, with the exception of clerks who wear a simple white collar. The trimmings on the official robe and beret depend on the function. For judges, the trim is made of steel-blue velvet and for the notary staff, the trim is made of steel-blue wool. The President of the Federal Patent Court wears two gold strings on his beret. The Vice President and Senate Presidents wear a string of gold.

Notwithstanding the order, the beret is not used in everyday court life. In addition, instead of the white neck tie with drooping ends, a white tie is often worn.