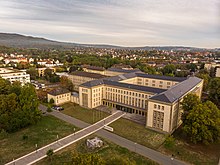 New main entrance from the south

Postage stamp on the occasion of the 50th anniversary 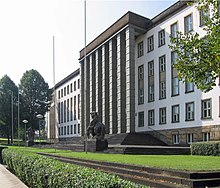 The Federal Social Court (BSG) in Kassel is the highest court of social justice in Germany and thus, alongside the Federal Labor Court , Federal Fiscal Court , Federal Court of Justice and Federal Administrative Court, one of the five highest federal courts . It opened on September 11, 1954. The first public meeting took place on March 23, 1955.

As an authority , the Federal Social Court - like the Federal Labor Court - is subordinate to the Federal Ministry of Labor and Social Affairs and is subject to its general supervision . However , it is independent in its work as a court .

As a court of appeal, the BSG decides on appeals against judgments of the regional social courts or - if the appeal was not admitted - on non-admission complaints . If the only instanzlich competent Social Court , the leap-frog approved and the parties agree, the BSG checked in rarer cases, judgments of the social courts. In addition, it is first and last instance responsible for disputes of a non-constitutional nature between the federal government and the states or between different states in matters of social insurance and other legal disputes assigned to social justice.

The following parts of this section seem since 2017 is out of date to be : Judge not active
Please help with to the missing information research and insert .

The panels of the BSG are called Senates . They are each staffed with three professional judges and two honorary judges . 14 Senates have existed since July 2007. The Grand Senate also exists as a special panel . The proportion of women among professional judges is currently (as of 2015) with 11 out of 42 people 26 percent.

4th Senate: Basic security for job seekers (together with the 14th Senate)

5th Senate: Statutory pension insurance (together with the 13th Senate)

11. Senate: Unemployment insurance and other tasks of the Federal Employment Agency

13th Senate: Statutory pension insurance (together with the 5th Senate)

14th Senate: Basic security for job seekers (together with the 4th Senate)

1 Until January 31, 1976 there was no Vice-President, only a "permanent representative of the President".
2 as Vice President from February 1, 1976

The neoclassical building on Graf-Bernadotte-Platz was constructed from 1936 according to plans by Ernst Wendel as a service building for the military district command IX and inaugurated on May 11, 1938. The building with the representative portico has a monumental design and, with the courtyard of honor and the flag hall, contains typical elements of public architecture under National Socialism . In front of the house there are two sculptures by Joseph Wackerle who tamper with horses . In 1943 Christine Brückner was drafted into military district command IX.

When Kassel came into consideration as the federal capital of the Federal Republic, the parliament and the chancellery were to be set up in the building . This did not happen, but the former royal seat of Kassel received two federal courts, which were housed in this building.

After German reunification , the Federal Labor Court was relocated to Erfurt, so that since 1999 only the Federal Social Court has been housed in the building. In 2008–2009 the building was renovated under the direction of the Junk & Reich architects' office. The entrance area was moved south to Wilhelmshöher Allee and a new conference room was built in the inner courtyard in order to break the power architecture of National Socialism and make the conference room transparent.

The building is still popularly referred to as the “General Command”. Today it is a cultural monument of the state of Hesse.

On the occasion of the renovation of the courthouse in 2008–2009, a two-stage art-in-building competition was held across the EU. The work of the Munich artist Gabriele Obermaier was selected, realized and installed from among 249 participants. Under the title “Soft House” it depicts the courthouse, scaled down and alienated. It is a cast aluminum measuring 660 × 530 × 280 centimeters and is about 40 meters away on the meadow in front of the new south main entrance. The defiance and severity of the building erected by the fascists are shaken. The pillars lose their rigidity and symbolism. After relocating the main entrance during the renovation from the monumental east side to the plain south side, Martin Seidel calls the Weiche Haus the "renewed, this time artistic 'denazification' of the building".

Social justice in the Federal Republic of Germany