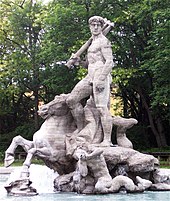 Neptune Fountain (1937) in the Old Botanical Garden in Munich

Rossebändiger fountain in front of the Kunsthalle Schweinfurt (1934)

Rosseführer (1936) at the Olympiastadion Berlin 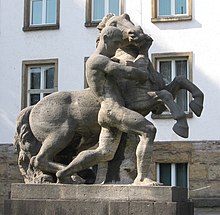 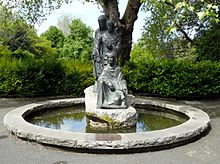 Wackerle's grandfather was a wood carver while his father was a builder. At the age of 13, Wackerle attended the wood carving school in Partenkirchen. This was followed by training at the arts and crafts school and at the academy in Munich . At the age of 26, Wackerle became the artistic director of the Nymphenburg porcelain factory in Munich. In 1909 he received a small gold medal at the Great Berlin Art Exhibition . From 1913 to 1917 he worked as a teacher at the teaching institute of the Kunstgewerbemuseum Berlin . In 1917 he succeeded Josef Flossmann at the Munich School of Applied Arts, and in 1924 followed a teaching position at the Munich Academy , where he taught until 1950.

On his 60th birthday in 1940, Wackerle received the Goethe Medal for Art and Science at the suggestion of Adolf Hitler . As early as 1937, Goebbels had proposed the Reich Senator for Culture, Wackerle, for the German National Prize for Art and Science. He was highly valued as an artist by the National Socialist rulers, so that in August 1944 Hitler added him to the list of the most important German sculptors who had been gifted by God , which freed him from war missions.

Wackerle made a name for himself as a masterful fountain sculptor. His works were also in demand among the political prominence of the Nazi state. In 1938, for example, he made a fountain for the garden of the Bormann property in Munich- Pullach . Oval stucco reliefs with a nymph and a Pan as a youth (exhibited in the “ House of German Art ” in 1939 ) adorned Hitler's tea house on Obersalzberg . A nude study by Wackerle was in Hitler's Berlin apartment. He also made two files for the Reich Chancellery . The Zeiss high-rise in Jena received a male nude with a torch and a kneeling female nude Wackerles as plastic jewelry.

After the end of the Second World War, Wackerle seamlessly continued his career in the 1930s. Since he had not joined the NSDAP or any other party organization and his public works had hardly any substantive references to National Socialist ideology, he was still highly valued in the Munich area. This unbroken appreciation came among others. a. in the award of the fine arts award by the state capital Munich in 1953. On the other hand, many contemporaries saw Wackerle's works after 1945 as backward, which was certainly also related to their respective function. According to his own statement, Wackerle saw himself primarily as an architectural sculptor and less as a creator of free sculpture purely for the purpose of exhibition in museums or other places.

His grave is in the Partenkirchen cemetery .