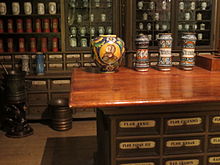 Majolica (sometimes also Maiolica ; after the old Italian name for Mallorca ) refers in the narrower (art-scientific) linguistic usage above all the colored painted tin-glazed Italian ceramics of the 15th and 16th centuries, in a broader sense also other types of colored glazed earthenware.

The name is derived from the Mediterranean island of Mallorca, from which the faience produced in Moorish Spain , in the early days mainly chandelier goods, was exported to Italy. The name of the export goods was later transferred to the independently developed Italian products. Art history, the ceramics industry and the household goods trade do not use the term in the same way. In addition, it has experienced a historical change in meaning. The art-scientific terminology and, following it, also the art trade limit the designation as far as possible to the Italian and Spanish (at best to the preceding Islamic) tin-glazed earthenware, which are decorated with the four sharp fire colors copper green, antimony yellow, cobalt blue and manganese violet (brown). Technically, there was initially no great difference to the corresponding ceramics, which have been produced in other European countries since the 17th century and which are exclusively referred to as faience . But they have also been using onglaze painting since the 18th century, for which a second, less hot fire is necessary.

In ceramic technology and colloquial language, majolica has been used for various types of glazed pottery since the end of the 19th century in the course of historicism, when the production of tin-glazed goods, which had largely disappeared, was taken up again and whose manufacturers were called majolica manufactories . Ceramicists sometimes understand majolica to be a product with a colored tin glaze.

Majolica (and faience) has a white, yellow-gray or light-red-brown, porous (not sintered ) body . The fully formed vessel is exposed to a first fire ("biscuit fire") at a moderate temperature. Then it is covered with an opaque white tin glaze, which, when not fired, is highly absorbent and provides an ideal base for the hot colors mentioned above. During the second firing, the glaze and the now bright colors merge to form a shiny, waterproof and permanent outer skin.

Imports from Spain, which is dominated by Islam, are an important prerequisite for the beginnings of majolica in Italy. Luster ceramics have been produced there since the 13th century at the latest , which in turn were based on Egyptian and Persian traditions. Until the expulsion of the Moors from Spain around 1610, they still delivered to Christian clients (often according to their motifs), when Italy had long since developed its own majolica culture. This began around 1400, initially using gray-white engobe instead of the white tin glaze. This first Italian majolica, the "mezzo-majolica" (half majolica), tried to achieve the same shimmering metallic sheen in the glaze as the work of Arabic pottery.

Around 1480–1490, workshops in the city of Faenza were the first to coat their pottery with tin glaze. Around 1500 grotesques and arabesques were incorporated into the ornamentation. From 1508 Casteldurante flourished and around 1520 the beginnings of the Istoriati style were developed, which then reached its richest expression in Urbino . Scenic images of biblical, mythological and historical "histories" (hence the name), often based on models by important artists, spread over the entire surface of the plates or other crockery in strong colors. Supported by the dukes residing there, Urbino was the leading city among the majolica-producing competitors around 1535. Strict grotesque patterns on a blue background are characteristic of the majolica from Siena (around 1500–1530). Deruta (around 1500–1550) largely follows the Faenza style, but also Spanish models (chandeliers, geometric ornaments). The early Dutch faience was inspired from Venice .

Serving tray with nickel-plated frame and majolica plate, around 1900

In the second half of the 16th century this luxury industry was sidelined, was increasingly dependent on larger sales and faster production and was completely abandoned in the Duchy of Urbino in the course of the 17th century. In 1718 there was still a pottery factory in Pesaro that produced ordinary vessels. In some places their own traditions have been given up entirely and the fashionable blue and white tableware is imitated in Delft style . Only in Abruzzo and Naples were attempts to renew the majolica manufacture around 1700. This frequent Neapolitan majolica did not reach the rank of the earlier products.

Towards the end of the 19th century, majolica production revived in many places in Europe. The first to attempt this on an extensive basis was Ginori in his factory in Doccia near Florence. Above all, he took the urban majolica as a model, the opalescent metallic sheen of the majolica at Gubbio was imitated. Replicas of the colored and glazed reliefs by Luca della Robbia and his successors were sold as originals to art dealers and tourists. A new way of doing things arose when the colors and glaze of majolica were transferred to statuettes and groups of a very popular type and with a drastic, lively effect.

In 1901 the Grand Ducal Majolica Manufactory was founded in Baden , which still exists as the State Majolica Manufactory Karlsruhe . The German Emperor Wilhelm II. Founded in 1904 at his summer residence in Kadinen a majolica workshop whose products as Kadiner tiles, for example, in Berlin at subway stations, representative buildings ( Wertheim on Leipziger Platz , Weinhaus Kempinski) and the wedding hall of the synagogue Fasanenstraße found using .

The Majolikahaus , an important Art Nouveau building in Vienna, is also known .

In the last third of the 19th and first half of the 20th centuries there were a number of ceramic factories that produced colored glazed ceramics. The term "majolica" has also become established for them, but only those with white lead-tin oxide glazes can correctly be called majolica.