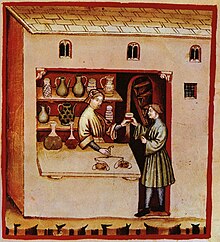 Pharmacy in the 14th century

Pharmacy (from the Greek. Φάρμακον pharmakon " remedies , poison , magic potion") or pharmaceuticals , German and pharmacology , is an interdisciplinary science that deals with the nature, effect, development, testing, manufacturing and distribution of drugs is concerned. Pharmacy combines aspects from various natural sciences, especially chemistry , biology and physics, with medical topics.

Pharmacists are people who have passed the second state examination in pharmacy . After a subsequent pharmacy internship (practical year) and the license to practice medicine , they are allowed to practice the profession of pharmacist .

Pharmaceutical research takes place in both pharmaceutical companies and universities. Before new drugs find their way into pharmacies and hospital pharmacies , they have to be approved by the drug authorities ( drug approval ).

People have always been concerned with areas of pharmacy. Criticism of the pharmacy stand (for example with regard to counterfeit medicines ) was already made in the Middle Ages. The subject of the subject is one of the oldest academic subjects ( materia medica ), but as an independent discipline (for which the work Circa instans in the 12th century created a basis), today's pharmacy is a relatively young science, which only began in the 17th century. / 18th Century.

It was not until the 18th century that private pharmaceutical schools emerged in the wake of the Enlightenment, which - in addition to traditional craftsmanship - took over the scientific training of pharmacists. In the 19th century, pharmacy studies were gradually made mandatory for pharmacists in the German states (since 1875 uniformly across the country). For example, the University of Würzburg received an independent pharmaceutical institute in 1888 . Since the 1920s, university pharmacy broke away from the chemical institutes and independent institutes were established.

The timetable for the pharmacy course is set out in the license to practice medicine for pharmacists (AAppO). The focus is on chemistry (approx. 40%), the remaining subjects are weighted roughly equally.

The staff of Aesculapius , symbol of the pharmaceutical industry

Modern pharmacy is divided into the following areas:

In some countries outside the German-speaking area, social pharmacy is also anchored. Social pharmacy deals with how patients, consumers, doctors, pharmacists, other health professions, politicians, organizations and associations as well as society as a whole deal with drugs, what mutual relationships they enter into and how this fits into social, cultural and economic contexts leaves.