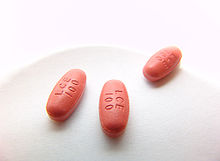 Medicinal forms of the Middle Ages and early modern times

A medicinal form frequently used from antiquity and into the Middle Ages into the early modern period is the Latwerge (Latin electuarium ). This form of pharmaceutical preservation is a concentrated juice and honey preparation. The "Kaiser Karls Latwerge", a remedy mainly used against hoarseness, which emerged from an earlier electuarium Karoli and whose ingredients can later also be found in another drug form, namely "Kaiser Karl's stomach powder", was particularly well known.

A typical early modern medicinal form is Morselle . Morsellen are oblong, square tablets made of evaporated sugar solution and chopped up spices, which are poured out and cut up. In the late 16th and 17th centuries, these were considered to be typical pharmacy confectionery, which was mainly used to promote digestion. To this day, they are offered as a treat in pharmacies.

A drug form closely related to the Morsellen is the rotula, which has a round shape and was applied internally. Rotulae were mainly made from sugar and were used as a carrier for bad-tasting drugs. Such rotula formulations can be found, for example, in the "Pharmacopoea Wirtenbergica" (1741).

The medicinal forms frequently used in the Middle Ages also include medicinal water ( aqua medicinalis ), which was produced by distillation processes (see also the little book about the burnt-out waters ). In the Gotha Pharmacopoeia, which was created at the end of the 14th century, 57 aquae medicinales are listed that can be prepared with simple or compound mineral or herbal medicinal drugs.

In the late Middle Ages and in the early modern period , pills were formulated with prescriptions for their composition and manufacture. Most of the pills contained bitter drugs, gums or resins . Malvasia wine , rose water or vegetable juices were used as the initial liquid for the powdered drugs . Syrup or honey were often used as liquids for kneading . The mass of pills that was pushed was stored as so-called Magdaleons, rounded structures of semi-solid drug masses in the form of sticks. For preserving these were in leather or waxed paper wrapped. At the beginning of the 18th century, so-called “pills” made of iron or brass were used to evenly break up the rolled-out strand of pills. With the pill machine, first mentioned in 1777, a certain number of pills could be divided and rolled out at the same time. Industrial production of pills began in the second half of the 19th century. The pill mass was prepared in a kneading machine, shaped into strands by means of an extruder and shaped into pills of the desired size on a pill cutting machine.

In the Middle Ages, powder (see also Powder (Pharmacy) ) held a special position among the medicinal forms to be applied externally , as it could also be used internally. However, powder preparations decreased steadily in the course of the 19th century, so that DAB 5 only mentions one powder monograph.

In contrast to other medicinal forms, the preparation of the ointment hardly changed in the Middle Ages . In the 16th century, ointments were used both for surface treatment of the skin, for inflammation of the mucous membranes and with deep-penetrating effects for headaches and general painful conditions. The mortar and pestle , which can already be proven in the ancient civilizations, were used to produce the ointment . Ointment preparations are still today as monographs in the pharmacopoeia .

In addition to fats and wax , the plaster medicinal form , which was also popular in the Middle Ages , mainly contained resin , which made it sticky. The plasters were produced by melting and mixing and then stirring the plaster. The plaster was then poured into bars or panels and shaped with the plaster press. The adhesive plasters on rubber base was since 1891 by the company Beiersdorf produced industrially.