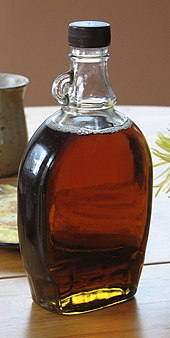 A bottle of maple syrup

Syrup (from Arabic شراب Sarab drink on the medieval Latin siropus , sirupus , sugar juice; sugary, viscous medicinal potion) is a viscous, concentrated solution ( concentrate ) that is obtainedfrom sugary liquids such as sugar water, sugar beet juice, fruit juices or plant extractsby cooking and other techniques. Due to its high sugar content, it can be kept for a long time in the absence of air, even without cooling. Syrup is used for drinks, desserts and as a medicinal form, also - especially sugar beet syrup - as a spread and dough additive for sweetening and coloring when cooking or baking (see: Sauce , brown cakes , rye bread / whole-grain bread ).

To make fruit syrup, the fruit is boiled with a little water and thus juiced. The sieved liquid is mixed with sugar, boiled again and then poured into bottles that have been rinsed with hot water (see Preserving ). In Germany, commercially produced fruit syrups for mixing with water or soda water were popular until the 1970s , but then went largely out of use. The most famous brand was Tri Top . In the course of the spread of drinking water soda makers, the range of syrup also grew again.

Commercially available raspberry or woodruff syrup (especially known as an additive for Berliner Weisse ) is made in most cases from concentrated sugar solution, flavorings and colorings - so it is not fruit syrup.

Syrup-like substances also occur naturally, such as. B. honey .

In the food industry, syrups play an important role as cold-produced juice concentrates ( thick juice ). The durability is less important than the reduced weight during transport. Orange juice , for example, is almost exclusively traded internationally as a syrup (orange juice concentrate) and is only diluted to the original concentration before filling with water. Further, glucose syrup , an enzymatically or chemically derived from carbohydrate-rich plants such as corn, potatoes or wheat, concentrated sugar solution, often as a substitute for the more expensive beet or cane sugar used.

Especially in the Middle Ages and in the early modern period, a wide variety of syrups were used, for example as laxative or diarrhea-promoting, digestive, changing the balance of the body's juices or stimulating.

Various syrup as sugar syrup and grenadine be as lemonade raw material and for mixing cocktails used. Lime Juice Cordial , which is often used in cocktails, differs from lime syrup in that it has a lower sugar content.