Bottling , canning or Eindünsten is a physical method, by heating food and hermetically to seal preserve .

The goods to be preserved are heated or boiled and bottled hot, or ready-filled bottles or glasses are placed in water, heated or boiled. The lids work like valves and close the glass airtight when it cools down due to negative pressure. As a result, bacteria or fungal spores can no longer enter if their maximum survival temperature is not reached.

Canning as a preservation method is not as safe as preserving the contents of cans in an autoclave , for example, due to the lower maximum achievable temperature (100 ° C, there is almost atmospheric pressure) during the preservation process, but it can also be done under the conditions of a private household practically carried out.

The synonym Einwecken is derived from the use of the previously patented glasses by the entrepreneur Johann Carl Weck ; The common especially in Austria and southern Germany synonym Einrexen of the Ordinance on canning using Einkochzubehör the former company Rex glass jar Society (1907-1925 in Bad Homburg ), whose brand name and patents in 1926 to the company Weck in Öflingen sold who used the name with subsidiaries until 1984. In 2015, an Austrian company revived the brand name.

Fruits, vegetables, mushrooms or meat or dishes made from them are suitable for preserving, provided they are not particularly sensitive to heat. Even cakes can be baked in preserving jars (which are also called preserving, Rex, preserving, jam or weck jars) and at the same time preserved ( glass cake ).

The food to be cooked is pre-cooked or raw, possibly filled with additional water into preserving jars and sealed with a rubber ring and a glass lid or cap. The lid is pressed on with a bracket or a clip made of spring steel during the cooking process. Wire brackets / clips and the cover sealed with a rubber ring work like a pressure relief valve . For preserving, the jars are usually in a water bath (in preserving pot heated) to reach the different levels depending on the Preserve Einkochtemperatur. The temperature must be held until the contents are thoroughly heated and sterilized . For this purpose, advisory literature offered tables for important foods. Protein-rich foods tend to require higher boiling temperatures, and in some cases they were heated twice at a certain time interval if resistant developmental stages survived.

The preserving jars can also be heated in the oven instead of in a water bath, but this method is less recommended because of the rubber rings that are sensitive to dry heat. In addition, the sufficient and even heating of the glasses in the oven can only be recognized by the fact that bubbles rise in the glass. However, this only happens at 100 degrees, a temperature that is already too high for sensitive fruit. It is also possible to boil it down in a pressure cooker , but it cannot be guaranteed that the food has been heated through.

After the glasses have completely cooled down, the brackets or clips can be removed. During the heating, the remaining air in the glass has expanded and partially escaped; When it cools down, this creates a strong negative pressure, so that the lid is pressed firmly onto the glass by the air pressure, if the glass edge and rubber ring are clean. If stored in a cool and dark place, cooked foods can be kept for several months or years. A lid that is only loosely on after the storage period can be a sign that the canned food has perished, as either a leaky seal led to the penetration of germs or fermentation gases are responsible for the loss of the negative pressure in the jar. 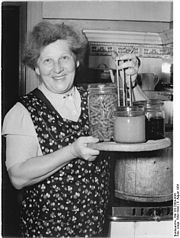 Preserving was originally invented by Denis Papin , who was already experimenting around 1700 with the preservation of jellies and cooked meat in copper pots sealed with putty. Apparently Papin had not recognized the importance of his discovery - it remained with laboratory tests.

The renewed invention of the boiling goes back to an initiative of Napoleon Bonaparte , who offered a price of 12,000 gold francs for the invention of a process for the preservation of food, in order to be able to supply his troops better on military expeditions. The prize was won in 1810 by the French chef Nicolas Appert , who discovered in 1790 that food can be kept in closed containers by heating it to 100 ° C. In the 1880s, the Gelsenkirchen chemist Rudolf Rempel developed glasses whose edges were sanded smooth and which were closed with rubber rings and sheet metal lids. He also designed devices to keep them closed during the boiling process. He had this invention patented in 1892. One of his first customers was Johann Carl Weck , who after Rempel's death in 1893 acquired the patent and the exclusive right to sell his glasses and appliances. With the merchant Georg van Eyck, he founded 1900 in Öflingen the company J. Weck u. Co. The thereupon rapidly throughout the German-speaking world spreading neologism canning is thus in the name Weck due. As early as 1907, the new word was included in the Duden . The process appeared revolutionary at the time, as it was much safer than previous preservation processes and the nature of the food was not significantly changed (e.g. when drying fruit). It was also suitable for almost all common foods, so that z. B. leftover food could also be boiled down.

In addition to the glasses and lids, the Weck company also developed and produced other accessories: In addition to the rubber rings to be inserted between the lid and the glass, a boiling pot in which the glasses were heated in a water bath, as well as an insert on which the glasses were placed so that several were conveniently placed to be placed in the pot. Initially, this insert also served to hold the glass lids in place, which were pressed onto the glasses by suspended spring clips. However, since the jars had to remain on this insert until they had completely cooled down and only then could it be used again, it was soon decided to close each jar with its own clamp. With the help of a thermometer that was put through the lid of the pot, one could check the temperature. In addition to glasses for fruit, vegetables and meat, juice bottles were (and are) also offered, and the Weck company sold one of the first steam juicers for extracting juice from fruit and vegetables . In addition, recipe books and a magazine ("Die Frischhaltung", appears to this day under the title "Ratgeber Frau und Familie") were published to make the new process known.

In addition to the Weck company, other manufacturers of preserving jars soon appeared on the market, well-known brand names are Gerrix, Rex, Frauenlob, Ruhrglas, Heye, Victoria, Kieffer and others, because almost every glass factory also offered preserving jars.

Over the decades, different types of glass have been developed that differ in the shape of the lid and edge (flat edge glass, solid edge glass, grooved glass and round edge glass). Further developments in preserving were the introduction of cell glass (cellophane), especially for jams, or the screw cap as an alternative to the mason jar lids sealed with rubber rings. In combination with multi-groove lids, rubber rings for single use were known (Inko / GDR brand), which vulcanized when they were boiled down. Furthermore, aluminum lids for single use are known which, like screw lids, contain a seal and are crimped around the edge of the glass with an inner cone .

The heyday of canning was from the beginning of the First World War until the 1960s. At the beginning of the Second World War, around 90 percent of all German households were cooking fruit, vegetables, meat and other foods. Since deep freezers and freezers have become widespread in households, freezing has largely replaced preservation. The availability of almost all foods throughout the year has also contributed to the fact that preserving is practiced to a lesser extent. However, in the last few years there has been an increasing trend towards preserving food, which was caused, among other things, by the desire for organic food and the new interest in “DIY”. Unlike in the past, however, cooked foods are no longer an indispensable part of the diet.

The term boiling originally indicates the weight loss and the resulting thickening of food through cooking, for example when boiling a broth as a result of the loss of water through evaporation.

The phrase “go to the nitty-gritty” means as much as it is now about the essentials, getting down to the substance; attack the reserves and can be traced back to the fact that in the past, food was specially cooked and preserved for winter or for times of need and was considered an important reserve.

The expression "I have to boil it down" or "she boiled it down" used in Austrian colloquial language means to bring about a partnership with someone with the help of special (female) seductive skills or cooking skills . However, this term could not only be derived from preserving in the sense of preserving , but also be an analogy to trapping .

The saying that occurs in the Vienna area “you can rex it” means something like “put something out of the game” or “you can forget that (like something cooked in the cellar)”.

Preserving is one of numerous methods of preserving products, i.e. protecting them against spoilage by microorganisms.

Further methods, some of which are also used in combination, are:

Particularly in lactic acid fermentation, boiling is chosen as a supplementary measure.