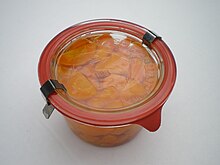 A preserving jar (especially in eastern Germany also mason jar , mason jar as well as southern German, Austrian also Einsiedeglas as well as Austrian Rexglas ) is a hollow jar that is used for the sterilizing preservation and storage of food; partly also for baking and cooking food. Mason jars are a form of canning jars . According to statistical data from the German sugar industry , one billion jars were boiled down in Germany in 2012 : 300 million of them were filled with jam , 600 million with compote , peas or beans and 100 million with meat. According to the sugar industry, these are considerably larger quantities than were awakened in the 1990s.

A distinction must be made between jars with a screw cap (twist-off) or those in which the lid is made of glass and has a rubber ring for sealing, but is permanently connected to the jar by a hinge and a lever lock. The classic preserving jar is mainly used for private preservation. For the long-term storage of food, jars with screw caps or cans are mostly used commercially or industrially .

The jars have a contact surface on the upper outer edge for a sealing rubber ( Weckgummi ), on this a glass lid is placed and fixed with one or two lateral spring clips. The Einsieden (medium high German insieden "boil, einsieden, thick") takes place in a water bath of Einkochtopfes : by heating (and the associated volume expansion of the contents) is produced in glass printing, this can escape between the rubber ring seal and the cover. There should be some air between the food and the top edge so that no food is squeezed out. When it cools down, the volume of the contents is slightly reduced and a negative pressure is created (see also vacuum ), as the lid, which is sucked onto the rubber seal, prevents pressure equalization. In the GDR , the so-called INKO jars were widespread, in which a non-vulcanized rubber ring was used, which glued the glass and lid together through the heat of the boiling process.

The clamps attached to fix the lid during the boil-down process should be removed after it has cooled down; the vacuum in the glass ensures that it is sufficiently closed. Should the contents of the jar spoil, this can easily be recognized by the loosely resting lid, which would not be possible if the clips were left on the lid. The cooled indoor air and the other contents are (with proper, clean processing and corresponding original products) practically germ-free due to the heating, the processed food can often be kept for many years.

Depending on the shape of the edge of the glass and the lid, a distinction is made between flat-edge, solid-edge, grooved and round-edge glasses for which different ring formats are sometimes required. Preserving jars were and are offered in many different sizes and shapes, while in the past mostly jars with a liter (or more) capacity were common, today the trend is towards smaller jars due to smaller households. The shape of the glasses is different: Tapered glasses allow the contents to be "overturned" and are used for sausage, meat or glass cakes , glasses with a drawn-in rim are intended for fruit and vegetables. In addition, there are special forms of jewelry that should be particularly decorative and are primarily intended to be given as gifts, and bottles are also offered for boiling juices. Some food manufacturers also sell their products (e.g. sausages ) in traditional preserving jars.

To open the glass, pull the tab of the rubber ring so that it is pulled out from under the glass lid and air can flow into the glass. If the rubber ring does not have a tab or has become brittle, a painter's spatula or a special device that drives a wedge between the glass and the lid can be used.

The process was invented after 1880 by the Gelsenkirchen chemist Rudolf Rempel and patented on April 24, 1892. After his younger brother, a manufacturer in Plettenberg , sent the first glasses, Johann Carl Weck took an interest and bought the patent in 1895. Together with Georg van Eyck , he founded the company J. Weck u. Co. (today J. Weck GmbH and Co. KG). The term awakening was included in the Duden dictionary in 1934.

Compared to the previously common way of placing vegetables and fruits in stoneware pots or glasses tied with pig bladders, the new process was much safer and allowed almost unlimited shelf life, and no addition of salt, sugar, acid, alcohol or other preservatives was necessary. In contrast to food cans, the contents remained visible and no special devices were required to close them, and the jars could also be reused. It was also emphasized that the glasses were particularly hygienic as they were easy to clean. The contents did not undergo any chemical reaction with the glass, as was usual with the metals of the tin cans. In addition to glasses and accessories, the Weck company also offered cookbooks and courses on how to properly use glasses and published a magazine.

In Austria in particular, Rex canning jars were also used. Derived from this, the term einrexen was created as a German-language synonym for preserving.

The Swiss preserving jar, which became known nationwide under the name Bülach from 1920 , was suggested by the federal government due to the shortage of preserving jars during the First World War; it was produced until 1972.

Particularly in the time of need after the two world wars, food kept in one's own garden was an essential part of the diet. Since then and up until the 1960s, fruit and vegetables were offered much more seasonally in the markets than they are today, it was also common among the urban population to canning the agricultural products that were cheap and in large quantities during the ripening period. In the GDR this played a major role until 1989, while in the West, from the 1960s onwards, a year-round range of inexpensive fruit and vegetables was increasingly available.

In addition to the Weck and Rex companies, numerous glass factories produced preserving jars up until the 1960s. Due to declining demand, the classic jar with a loose lid is now only manufactured by the Weck company. The Rex brand, which now belongs to the Weck company, was discontinued in 1984, but revived in 2015.

In recent times, in connection with the turn to regionally produced products, there has been a renewed interest in the use and production of preserved foods, also in top gastronomy. 120 years of mason jar

The type of glass is very often embossed on the glass itself or on the associated lid. Since this is not always the case, here is a brief description of the different types of glass. In general, it can be said that glasses and lids from different manufacturers can be mixed with grinding or solid rim glasses and also with grooved glasses, but glasses and lids of different types of glass do not match. The dimensions of the rubber rings vary depending on the type of glass, their size is usually indicated by the inside and outside diameter in millimeters, the most common ring format is 94 × 108 mm.

Flat-rim jars were the first canning jars to be mass-produced. With them, the support edge for the rubber seal was completely ground flat. The sealing surfaces of the lids were also ground flat, but the lids have an elevation on the inside which prevents the rubber seals from slipping and the lid from sliding off the glass. For these glasses, particularly wide rubber rings are required, which are traditionally provided with two flaps for opening, for flat-rim glasses with a wide opening, rings in the format 96 × 118 are used, for those with a small opening 64 × 87 mm.

In the case of the grinding edge glass (also known as solid edge glass), the contact surface for the rubber seals is also ground flat. In contrast to the flat rim glasses, however, the grinding rim glasses have a raised edge around the filling opening around which the rubber seal is placed. This edge can also be grooved on the outside in order to give the sealing rubber even more support. The corresponding lids are often similar to Petri dishes, but some manufacturers can also be very similar to the grooved glass lids. In any case, the lids are characterized by the fact that the contact surface on the rubber seal, which is only about 2 mm here, is also ground flat. The standard ring size 94 × 108 is usually used here, glasses with a wide opening are less common for rings in the 112 × 128 format.

The grooved glass has a groove as a support surface for the rubber seal, which is already created when the glasses are manufactured and therefore does not require any further processing step (flat grinding, e.g. with flat-edge and grinding-edge glasses). The edge is drawn higher towards the filling opening so that the seal can be neatly applied. The corresponding lids are also unground and can be recognized by the fact that the sealing surface protrudes approximately half-round and fits exactly into the groove of the glass. For grooved glasses, rings in the standard size 94 × 108 mm are used, there is a special design with a small notch in the inner edge, which should make it easier to open the grooved glasses. These special rings are traditionally colored blue.

These types of mason jars are still produced today. The sealing surfaces of the glasses are semicircular towards the top. The matching lids have a smooth, not sanded contact surface for the rubber seal. The rubber seal is inserted into the lid, the lid is specially recessed in the middle. Compared to the old shapes, round rim glasses have the advantage that they can be stacked easily thanks to the recess in the lid. The standard rings with 94 × 108 mm are also used for round rim glasses, there are also round rim glasses with smaller openings, for which rings in the size 74 × 86 or 54 × 67 mm are required.