This article deals with food preservation, for the joining process see assembling , for the laying of incense grains on a glowing charcoal in the censer in the liturgy, see navicular . 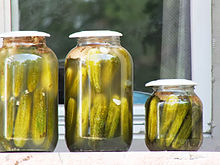 Pickling cucumbers , here in a Hungarian type of preparation with pieces of sourdough bread to promote lactic acid fermentation

Insert is a way to food to preserve and spice. Pickling is a form of pickling food.

The food is completely covered with a spicy vinegar or salted water. In Italy and other Mediterranean countries, foods are also preserved in olive oil . Pickled be as pickles , mustard pickles , pumpkin , baby corn, onions , beetroot , Bismarck herring , sherry Sild, pickled eggs and other foods.

In the case of vegetables, the brew should be poured hot over the food so that a possible fermentation process is prevented for as long as possible. Cellophane or canning skin, which is tied off, is used to seal off the air . Today, preserving jars are more likely to be used because they exclude germs better and airtightness is better guaranteed. Large glasses, so-called ports or ceramic jars can also be used.

A special feature is the sour pickling of pickled cucumbers and other pickled vegetables , in which lactic acid fermentation is desired as a type of natural fermentation and can be deliberately promoted by adding bacterial cultures. The lactic acid bacteria suppress the development of undesirable bacteria and yeasts and enable a very long shelf life. It is believed that foods fermented in this way are beneficial to health. In addition to lactic acid , small amounts of alcohol and vinegar can be produced. Since carbon dioxide is also regularly formed, the vessels cannot be sealed airtight. Traditionally, the vegetables were kept under the surface of the water by weighing them down with stones to avoid contact with the air. A fermentation lock is often used today. On the surface forming Kahmhefe can be easily skimmed off.

It should be stored in a dark and cool place and as little dust as possible should get into the brew. Pickled food can be stored and consumed for about a year, but it is always possible to spoil it prematurely and occasional checks are therefore recommended. Many common molds are toxic and can cause chronic illness and even cancer . This also applies to some types of bacteria, which may be more difficult to notice. This may be indicated by a strong cloudiness or a noticeable odor.

The consumption of sterile pickled foods that have not been fermented with lactic acid should take place within a few days, as microorganisms enter the brew when they are first removed. Only clean cutlery should be used for removal, which limits the introduction of harmful microorganisms. Subsequent cooling can also greatly delay spoilage.