Pumpkin is a redirect to this article. Further meanings are listed under Pumpkin (disambiguation) . 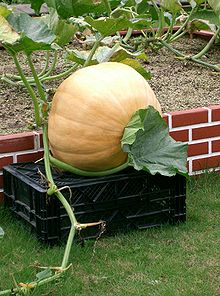 The different species were largely domesticated independently for the same use . The time was long around 5000 BC. BC assumed what would be after Phaseolus and Capsicum . However, recent finds of domesticated pumpkin seeds are dated 8000 to 10,000 BC. To date. Pumpkins were grown in the Moxos Plain over 10,000 years ago. The garden gourd was domesticated in Mexico and the southern United States, the musk gourd in Central America, and the giant gourd in South America. It is believed that the nutritious seeds were originally used as they are free from bitter substances , while all wild forms have bitter fruits. The selection of non-bitter forms also made it possible to use it as a vegetable. Already in pre-Columbian times there was a great variety of varieties. Seeds came to Europe early on, where pumpkins were popularly grown.

The pumpkins are annual , rarely perennial , herbaceous plants . Most species, including all cultivated ones, are more mesophytic and have a thread-like root system ; only a few species are xerophytic and have an enlarged root system. The stems are usually prostrate or climbing. The tendrils are three to seven times branched.

They are monoecious ( monoecious ). The flowers stand individually on long stalks in the leaf axils. The chalice is bell-shaped and has five lobes. The crown is of 6 to 10 cm length in both sexes almost the same size, campanulate, fünfzipfelig by the maximum divided to half. The flower color is golden yellow, Cucurbita okeechobeensis has cream colored flowers. The male flowers appear to have three stamens , but 2 + 2 + 1 are fused. The stamens are free, the anthers have grown together to form a column. The female flowers have small staminodes and a three to five-fold ovary below . One pen is short and carries three to five bilobed scars . In a discus and at the base of hypanthium is nectar produced.

The fruits are three- to five-fold, very large and multi-seeded carrot berries . Shape, size and color vary greatly depending on the cultivated variety. In the wild forms, the pericarp is hard and lignified and remains intact for a long time. After a long period of storage, essentially dry pericarp, stem and seeds remain. Dry fruits are also buoyant. The seeds are flat, ovate to elliptical in outline and have a thickened edge.

The number of chromosomes in the genus is 2n = 40. It is believed that this is an ancient polyploidy . 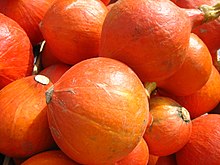 The genus is originally native to America only. The domesticated species are cultivated today in warm areas around the world.

The locations range from hot dry areas to cool cloud forests. All species are sensitive to frost. Most species grow in hot, lowland areas with pronounced rainy and dry seasons. They need high levels of sun exposure. Germination or budding from the storage organs takes place at the beginning of the rainy season. The more mesophytic species usually grow in deciduous thorn bush forests. Furthermore, they often grow in naturally disturbed locations such as on river banks and in the floodplains of rivers. The sand of coastal dunes, waterlogged lowland soil or gravel soil at high sea levels can serve as the substrate. 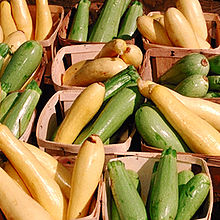 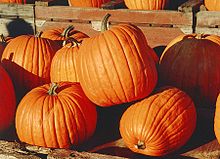 The genus is placed within the family in the subfamily Cucurbitoideae, Tribe Cucurbiteae. Her sister taxon is Peponopsis . Together with Peponopsis and Polyclathra it forms a group separate from the other genera of the tribe.

There are around 15 species in the genus Cucurbita :

Five species of the genus Cucurbita are cultivated by humans . Garden pumpkin , giant pumpkin and musk pumpkin are the more important ones; Cucurbita argyrosperma and the fig leaf pumpkin are only of regional importance. The five species can be distinguished by their fruit and leaf characteristics, which are indicated in the respective articles.
Representatives of other genera of the Cucurbitaceae family are also often referred to as "pumpkins" and are treated under use in the family article .

While the range of pumpkins was limited to America in pre-Columbian times , they have been cultivated in warm regions around the world since the 16th century. There is only a very limited difference in cultivation between the garden pumpkin and the giant pumpkin ; The forms of use are more important here:

The ten largest pumpkin producers in 2016 were:

The pumpkin in common German names

The pumpkin in English

In the English language in particular, there is a confusing multitude of common names for the pumpkin that only partially correspond to the botanical taxa . The best known examples are:

When squash pumpkins are referred originally used raw.
A distinction is still made - especially in the USA - between summer squash ('summer pumpkin') and winter squash ('winter pumpkin'):

Outside of the United States, different names exist for summer and winter squashes.

As a Pumpkin in the United States varieties are indicated by large, round fruits to cakes, pumpkin lanterns ( jack-o'-lantern are processed) and cattle feed. They are also used as table vegetables.
The varieties of musk and giant squash known in the United States as winter squashes are z. B. in India also referred to as pumpkins .

Cushaw are called winter squashes with a curved fruit set. They are used for baking or as animal feed.

As gourds pumpkins are usually referred to, which does not serve food purposes; but also species of other pumpkin genera , such as. B. the bottle gourd , the bottle gourd ( Lagenaria siceraria ), are called in English Gourd .

Pumpkins consist of over 90% water , which is why their nutritional value is low at 122 kJ per 100 grams. The content of vitamins and minerals in the pulp is also low. In the cores, however, this is higher. Pumpkin seed oil is made from pumpkin seeds and has a long shelf life due to its high tocopherol content.

The color of pumpkins is mainly determined by carotenoids (e.g. α- and β-carotene), with both the concentration and the distribution of these (in the pulp and skin) being different. The flavor depends on the various pumpkin types of different materials, often alcohols , aldehydes and esters are crucial. For example, pumpkins of the Rouge variety contain mainly flavorings that consist of nine carbon atoms . In other varieties, flavorings that consist of six carbon atoms dominate (e.g. Sunny ). Jonones can also represent main aromatic components (e.g. nutmeg ). Some - especially wild pumpkins - have a bitter taste, which can be attributed to cucurbitacine .

Bitter-tasting pumpkin (dishes) should not be eaten. The bitter taste is caused by the poisonous bitter substances cucurbitacins, which are not changed by the cooking process and which can attack the stomach and intestinal mucosa. Especially by back-crossing (home-grown seeds) or crossing with other squash plants (zucchini), an increased content of Cucurbitacin result.