The title of this article is ambiguous. Further meanings are listed under aroma (disambiguation) .

The following important information is missing from this article or section:
Information on production / extraction
Help Wikipedia by researching and pasting it . 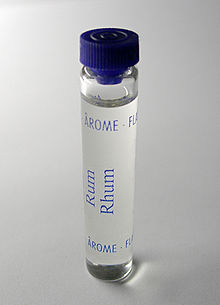 Rum baking flavor in an ampoule

As a flavor ( Greek ἄρωμα aroma , German , Spice ' , fragrance', ' Perfume '), a specific smell and / or taste designated by chemical substances or mixtures of substances is caused, in products such as food , stimulants or drugs containing could be.

If the aroma of a food differs from the typical aroma, it is called an off- aroma .

Industrial products are often mixed with concentrated solutions of odorous substances in order to avoid the use of natural products for reasons of cost or to achieve a product ideal with a constant aroma despite natural fluctuations. If the flavor of the product is insufficient, natural or nature-identical flavorings are used as food additives . Some flavors can be reproduced very well with aromas, for some others this is not (yet) true.

Due to meteorological and political influences, there may be strong fluctuations in the quality and quantities of natural flavors (see vanilla ). The production of flavorings is becoming increasingly important economically, which is due in particular to their use in industrially processed and packaged foods. In 2011, around 10.6 billion US dollars were sold worldwide with flavorings, both naturally obtained and synthetically produced. The prices for the respective aroma vary greatly between these subgroups.

The coupling of capillary gas chromatography with mass spectrometry is used for the qualitative and quantitative characterization of the aromatic substances .

Aromas are mainly perceived through the sense of smell , as volatile aromas reach the sensory cells of the olfactory mucous membrane in the nasal cavity via the pharynx-nose connection when eating . The olfactory mucous membrane in humans contains around 10 million olfactory cells , which can be differentiated according to their olfactory receptor into around 350 types of receptors, each of which is excited by a specific molecular structure of an odorous substance . By stimulating different types of receptor cells at the same time , a far higher number of different olfactory sensations is possible, and humans can learn to distinguish several thousand from them.

The sense of taste localized on the tongue , on the other hand, can only recognize five flavors (sweet, sour, salty, bitter and umami ). In addition, there is the sharpness of the taste , which is perceived via heat and pain sensors and is therefore not counted among the flavors in the narrower sense.

In vegetables, flavorings are often only formed when the cell structures are destroyed during processing. In the process, enzymes are released, through which aromatic substances are formed from various precursor molecules. A common example is the aroma of garlic and onions, which can only be clearly heard after cutting. Because some enzymes are only found in certain types of vegetables, characteristic aromatic substances can then be created.

Most of the aromatic substances are produced in fruits when the metabolism is switched from anabolic to catabolic during the ripening phase. Then, depending on the metabolic pathway, different biomolecules are broken down, whereby aromatic substances are formed. Chopping fruits interrupts the synthesis of flavoring substances and, similar to vegetables, enzymatically controlled reactions occur. This means that existing flavorings can continue to react to form new flavorings. Therefore, the flavors of fruits and fruit juices usually differ.

The Maillard reaction is mainly responsible for the creation of flavorings when heated. Amine compounds (mostly amino acids) react with reducing compounds (mostly reducing sugars ) and, in many successive reactions, numerous aromatic substances such as B.  pyrazines .

In addition, further aromatic substances can be formed by pyrolytic decomposition , especially at higher temperatures .

The following important information is missing from this article or section:
Situation in Switzerland
Help Wikipedia by researching and pasting it .

Aroma substances are chemically defined substances with aroma properties. So far, around 10,000 aromatic substances have been identified in nature. The flavor industry uses around 2,500 flavor substances. In general, flavorings can be divided into two subcategories:

The European Food Safety Authority (EFSA) has tested all natural and synthetic flavorings for their harmlessness. The substances that can be used are listed in a positive list (Union list) (Implementing Regulation 872/2012).

Aroma extracts are complex mixtures of natural aroma substances. For example, there are extracts from fruits, spices, herbs, meat, fish and vegetables. They are obtained just like natural flavorings and are subject to the same legal requirements.

Thermally obtained reaction flavors are created through controlled heating of sugar and nitrogen-containing ingredients (e.g. grape sugar with beef extract). The aroma is only created by heating, for example when baking bread or roasting meat.

Smoke aromas arise when smoke condenses in water, i. H. is caught. In order to produce smoke aromas, manufacturers have to comply with and strictly control certain legal requirements with regard to temperature, water content of the wood and air supply.

Aroma precursors (for example carbohydrates or amino acids) have no or only limited properties of their own that impart odor or taste. However, they develop this through reaction with other components during food production.

Other flavors are those flavors that do not fall under the aforementioned categories, such as grill-like flavors that are made by heating vegetable oils.

Handling of the flavors

In order to be able to use and dose flavors in food better, they are usually mixed with carrier substances or solvents, for example with starch , lactose or alcohol. For technological reasons, some flavors also contain food additives, such as emulsifiers or antioxidants. These additives may only be used if they have been checked for their safety and if they have been approved by law.

The European Flavor Regulation regulates the labeling of flavors. This applies to the sale of flavors to the food industry or to end consumers (e.g. vanilla sugar or baking flavors) as well as to the designation of flavors in the list of ingredients in food packaging.

The term “aroma” can always be used if the food contains one or more of the six legally defined aroma categories. It is also possible to describe the aroma more precisely (orange oil) or to describe it (strawberry aroma). The addition of caffeine and quinine must always be labeled separately. This also applies to smoke aromas, provided they give the food a smoky taste.

The European Flavor Regulation places special demands on the use of the term “natural”. These apply equally to the labeling by the flavor manufacturer as well as to the designation of flavors in the list of ingredients for foods. In principle, the term “natural” may only be used if the aroma contains only aroma extracts or natural aroma substances. Synthetic aromas, thermally obtained reaction aromas, smoke aromas, aroma precursors or other aromas must therefore not be given the addition “natural”. Vegetable protein hydrolyzate, which is declared as “spice” or “broth”, is not a natural ingredient in the sense of the Flavor Ordinance.

In the interests of improved consumer protection aimed at by the legislature, the raw materials of the aroma (e.g. strawberry or vanilla) should be mentioned when using the term “natural”, unless these are not recognizable in the aroma or taste of the food. Using the example of "strawberry", the following labeling options can be distinguished:

The addition of artificial flavors instead of natural flavors (or in addition) can be detected qualitatively and quantitatively by means of an enantioselective analysis . The enantiomeric ratio is used, the property of many natural substances that individual aromatic substances occur in a characteristic distribution of their enantiomers (these are stereoisomeric chemical compounds, see also chirality ). This analysis is primarily used to test natural fruit flavors and foods flavored with natural fruit flavors. This can be used to determine whether the products are labeled in accordance with the regulations and whether only natural flavorings are present.

One of the most comprehensive lists of organic flavors was presented by Georg Cohn as early as 1914.

The European Commission has drawn up a list that groups together all the flavoring substances used in the EU.

On October 1, 2012, the EU Commission published a list of the flavoring substances approved in the EU (Union list). This will be valid from April 22, 2013 and after the transition period of 18 months specified in the Flavor Ordinance 1334/2008 has expired, it will be binding for all flavors produced in the EU. After this transition period on October 22, 2014, only flavorings that are manufactured from the substances listed in this Union list may be placed on the market. Components of aromas from the categories “aroma extracts” (if produced from food) and “thermally obtained reaction aromas” (insofar as the stated production conditions have been complied with) do not need to have been registered in the Union list. Flavors and foods that do not comply with this ordinance may, however, still be consumed up to the expiry of the respective best-before date.

Structural formula of the enantiomers of carvone

Since the taste sensors (receptors) are chiral , enantiomers usually have different tastes. Most of the D - amino acids taste sweet, while the L - amino acids are bitter or almost tasteless. The dipeptide methyl ester aspartame only tastes sweet if both amino acids involved in the molecular structure are L -configured. The terpene ( S ) -carvone smells like caraway seeds , while ( R ) -carvone smells minty . The left form of the terpene lime smells of lemon , the legal form of orange .

In nature, individual enantiomers are often formed preferably with a certain enantiomeric excess , while synthetically produced flavorings are often obtained as a racemate and are not further separated for economic reasons. Therefore, in some cases the use of synthetic flavorings can be determined by an enantiomer-selective analysis (e.g. by gas chromatography with a chiral phase).

Legal quantity restrictions have been introduced for the following compounds added to food through flavoring substances, as they can be toxic:

These are exclusively substances that could not be removed from the aroma using appropriate processes. Most of these toxins are produced by plants , the starting material for most flavors, to protect themselves from natural enemies. So it is not a question of controlled conflicts of interest, but a real problem such as with acrylamide .

With the new EU Flavor Regulation coming into effect on January 20, 2011, the substances agaricic acid, aloin, berberine, hypericin and santonin are no longer subject to maximum quantity restrictions; instead, the substances estragole , methyl eugenol , teucrin A and menthofuran are newly included.

The new EU Flavor Regulation 1334/2008 regulates in its Annex III, Part B, which maximum quantities of these naturally contained but undesirable toxins may be contained in which foods. For all other foods there are no longer any general maximum levels. In this case, responsibility is transferred to the food manufacturer who, according to Art. 14 of the EU Basic Regulation 178/2002, must observe that food must be "safe".

A specialty of the toxins is capsaicin (hot substance of chilli pods), which as a pure substance may not be added to food in any form, but is allowed without restriction via the source of the chilli extract.

In food chemistry , key aromas that shape the characteristic aroma of individual foods are called character impact compounds, e.g. B. Vanillin as a carrier of the aroma of the spice vanilla or the raspberry ketone .